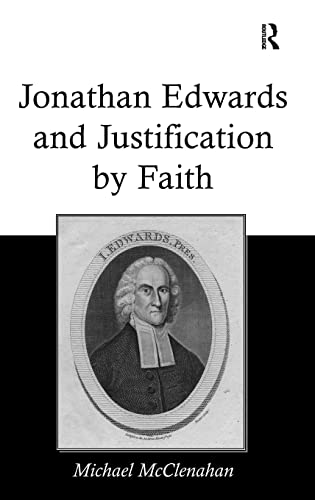 Jonathan Edwards and Justification by Faith

Amazing as it seems, there has been much debate over the last twenty years in the field of Edwards studies concerning his doctrine of salvation, for some have seen in Edwards’s teaching less the contours of Protestant orthodoxy and more a nudge towards traditional Roman Catholic soteriology. Whether such a revisionist interpretation focuses on participation in the divine, the place of works of love alongside faith in salvation, the infusion of holiness as grounds for justification, or the conditionality of the covenant, Edwards’s soteriology has come under intense scrutiny. This book by Michael McClenahan, minister in the Presbyterian Church in Northern Ireland, contributes much to the contemporary debate with extraordinary theological dexterity and patient exposition of pertinent texts in their context.

The central thesis of this book is that Edwards’s writings on justification have recently been misunderstood because they have been viewed by scholars through systematic rather than historical lens. McClenahan argues that Edwards’s early sermons, miscellanies and first published book of sermons treating the topic of justification in the 1720s and 1730s must be understood as directly responding to positions taken in the Church of England, notably by John Tillotson, Archbishop of Canterbury (1691–1694), and not as systematic statements which aspire to completeness, nor as a generic response to deist threats generated in the American colonies and espousing mere moralism. Edwards’s writing, especially his Masters defence in 1723, his sermon “Justification by Faith Alone” (1734) and the resulting book containing it entitled Discourses of Various Important Subjects (1738), is polemically located and contextually contingent. The author makes clear connections, for example, between the “Apostacie” at Yale in 1722, in which the Rector, Timothy Cutler and tutors Johnson and Browne, defect to the Anglican cause and Edwards’s response to it in the Masters Quaestio (p. 177). Similarly, McClenahan notes how Edwards quotes from Tillotson in the published sermon, sometimes without naming him according to the custom of the day (p. 173), and builds his own case in deliberate dependence on Tillotson’s own published work. The Archbishop viewed the Reformed cause as dangerously antinomian and had worked to denounce its views on faith, works, and spiritual passivity as destructive. Edwards, while honouring some epistemological insights of the Enlightenment, nevertheless takes umbrage at the Archbishop’s method and conclusions.

At stake in these historically subtle debates is whether Edwards, by preaching and writing about justification by faith, is critiquing an American individualistic and deistic moralism, akin to salvation by works, or whether he is in fact responding to a more pernicious Anglican enemy who under the guise of Christian morality has argued for the importance of obedience and social order but has thereby undermined Protestant distinctives in the doctrine of salvation. If the former understanding of the “noise of Arminianism” is adopted, Edwards is merely arguing for a view of salvation which is about a gift from God, potentially allowing Roman Catholic categories and conceptualities which also own the nature of a divine gift. If the later understanding of Arminianism is the privileged reading, Edwards is not espousing in his works the value of being generically Christian, but is more pointedly defending Reformed scholastic insights from a particular contemporary threat. I want to commend the method and conclusions which McClenahan has reached. Edwards is engaging with a pastoral concern to defend the gratuity of grace within the forensic setting of the formal cause of justification (pp. 53, 139) rather than the framework of dispositional ontology (p. 3).

Some strengths of this book stand out. McClenahan is writing as someone both systematically sharp and historically careful. We need writers in historical theology who create a bridge with the lived reality of the faith and thereby slow down systematicians. He also writes having read many of the unpublished manuscript sermons of Edwards, often unconsulted, thus giving texture and colour to his conclusions on the nature of justification in Edwards’s developing mind (see pp. 106, 117). There was more for Edwards to say after the 1730s in relation to justification, though the polemical starting points need to be honoured. In this book, dense and detailed, McClenahan gives regular summaries of the argument so far, both at the end of sections and at the end of chapters, allowing the reader to pull back from the minutiae to enjoy the view. While himself a conservative evangelical, McClenahan is able to offer critique of like-minded fellow travellers (p. 157), showing even-handedness and building trust with the readership.

On the other side of the ledger, the case studies McClenahan provides, for instance on George Bull’s Harmonia Apostolica or the Owen-Sherlock debate (pp. 69–76), though informative, need some further explanation of why they have been selected. While Tillotson is clearly in Edwards’s sights, and the arguments mounted respond pointedly to the Archbishop’s own books and sermons, could there have been other contemporary interlocutors as well? There are frequent typographical mistakes, not befitting a book by such an esteemed publisher: the use of apostrophe after Edwards’s name is inconsistent (pp. 92, 130), “grace” is spelled “hrace” on page 71, and denying many jokes of the last three hundred years, the great benefactor to Yale, Jeremiah Dummer, is presented as Drummer (p. 44)! On page 47, the name “White” without any other detail is given in footnote 112, not particularly helpful when the name White had appeared in the sentence noted anyway.

McClenahan’s book, the fruit of a doctoral dissertation at Oxford, is an extraordinarily rich contribution to present debates on justification in Edwards’s corpus, as well as providing careful distinctions which provides categories for evaluating other contemporary debates on soteriology. McClenahan is a sure hand, guiding us confidently and persistently through sometimes difficult historical and theological terrain. He makes clear his disagreement with authors in the field at particular junctures (for instance Miller, Morimoto, Kang, McDermott, McGrath, Pauw), chiefly by highlighting their decontextualized readings of Edwards. He makes of Edwards a man of his own Reformed scholastic times, who is also to be located in the historical moment of the vicissitudes of the revivals and their detractors.