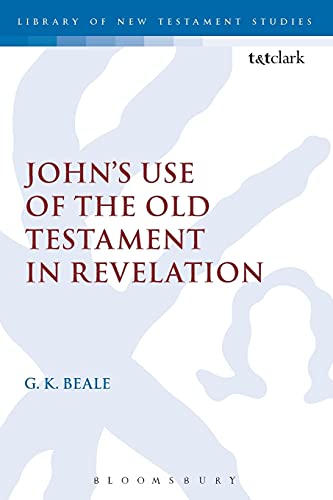 John’s Use of the Old Testament in Revelation, (JSNTS 166)

Ever since the publication of Beale’s thesis on The Use of Daniel in Jewish Apocalyptic Literature and in the Revelation of St John (1984), there has been a steady stream of articles culminating in his magisterial NIGTC commentary on Revelation (1999) and this collection. Previously published work occupies about half the book and includes the ‘Eschatology’ article from the IVP Dictionary of the New Testament, studies on Revelation 1:19 (1992) and Revelation 3:14 (1996), his contribution to the John Sweet Festschrift (1997) on the ‘Hearing Formula in the Letters’ and his thought-provoking piece on the effect of OT allusions on the grammar of Revelation (1997). These are supplemented by a survey of recent writing on John’s use of the OT, where he responds to his critics (especially me), an expanded summary of the different ways that John uses the OT (from his earlier contribution to the 1988 Lindars Festschrift) and two further pieces. The first is a 58 page article on the use of mysterion in Revelation and elsewhere. The second is a 38 page article on ‘The Bearing of the Old Testament on the Interpretation of the Millennium In Revelation 20:1–7’.

The nature of the collection means that this is not a comprehensive account of John’s use of the OT, despite its 443 pages. There is very little on John’s use of Ezekiel, for example, on which whole monographs have been written. This also reflects Beale’s view that the book of Daniel is the most important influence on Revelation. Indeed, he believes that whole chapters of Revelation (namely, 1, 4–5, 13 and 17) are a midrash on Daniel’s famous ‘Son of Man’ chapter. John’s visionary descriptions are not simply an account of what he saw but ‘also a result of subsequent reflection on the OT during the writing down of the vision’. John uses the OT in a variety of ways. He draws on many of its themes, uses segments as literary prototypes, borrows its language, universalises its message, indicates prophecy fulfilled and sometimes inverts its meaning in an ironic sense. I and others have concluded from this that John exercised considerable freedom in his use of the OT but Beale strongly argues that John never takes a text out of context and though texts might gain new significance by being placed in new settings, this never involves a change of meaning. Beale and I have debated these issues in the May and November issues of Irish Biblical Studies (1999).

Finally, what does Beale think about the millennium? In his own words, ‘the millennium is inaugurated during the interadvent age by God’s limitation of Satan’s deceptive powers … and by deceased Christians being vindicated through reigning in heaven … and it is concluded by a resurgence of Satan’s deceptive assault against the Church … and the final judgement’. Beale denies the ‘annihilation’ view in favour of ‘conscious suffering for eternity’, though one has to go to his commentary for a detailed defence of such views.