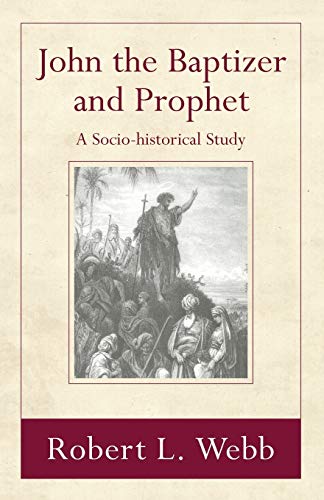 John the Baptizer and Prophet: A Socio-Historical Study (JSNTS 62)

Perhaps not very many theology students will rush out to buy this exhaustive and expensive work on the Baptist, but it will be a must for teachers of Christian origins. Within what has recently become known as the Third Quest of the Historical Jesus, one of the ‘certainties’ of the discipline is that Jesus’ ministry commenced in close association with the Baptist’s, and what one makes of John and his baptism is thus of considerable importance for understanding Jesus’ own ministry.

After three introductory chapters on method and scope, on Josephus (Ant. 18.116–119) as source for our knowledge of John (Slavonic Josephus and Mandean Literature are rightly assessed as contributing nothing of worth), and on the traditions concerning John in the gospels (canonical and extra-canonical), we reach the heart of the book in part II (chs. 4–6), which examines ‘John as Baptizer’, and Part III (chs. 7–10) on ‘John as Prophet’.

Part II offers a detailed analysis of the background in ‘Ablutions in the Old Testament and Second Temple Judaism’ (ch. 4) and ‘Ablutions in the Qumran literature’ (ch. 5). In these Webb charts the developments from the OT, where ablutions are relatively rare (primarily related to worship and service in the temple), and remove only the contagion of physical impurity (not the contagion of sin, for which sacrifice alone avails), to Second Temple Judaism, where ablutions proliferate in a variety of ways, immersions even becoming a daily practice (to remove inadvertent impurity) for the Essenes, Bannus, the Qumran sectarians and others. Particularly striking is the growing tendency to use ablutions as a symbol of repentance and the desire for moral cleansing (building on OT ablution metaphors). Where this was the case (some Baptists may rejoice to hear), ablution appears to have taken the form of immersion in running water.

Within this general setting, Webb argues (ch. 6) that John’s baptism was an innovative and unrepeated rite expressing conversionary repentance, which both cleansed from impurity (physical and moral) and (going beyond even Qumran) directly mediated forgiveness (contra Josephus Ant. 18.117). As such the rite (a) foreshadows the greater cleansing the expected one will bring by baptizing with the Holy Spirit (= Spirit of holiness) and fire, (b) (as at Qumran) initiates into the true Israel (this is supported by Josephus’ claim that John preached that the people ‘should gather together by baptism’ (so Webb argues we must take the βαπτισμω συνεναι of Ant. 18.117)), and (c) is a challenge to and a protest against the Temple (for which forgiveness would be mediated by the sacrificial system). Thus in sharp contrast to E.P. Sanders’ picture of John as a prophet of the restoration of all Israel, Webb argues that the Baptist strongly advocated a remnant theology, and that the water rite he initiated marked off those who would receive the Spirit of holiness from those who would be baptized with fire, and consumed by it.

The first two chapters of Part III analyse John’s prediction about the expected one (esp. Lk. 3:16–17; Q). Dr Webb argues (ch. 7) that in Second Temple Judaism the language of John’s promise (a mighty judge coming to purge and restore Israel, performing a metaphorical ablution of Spirit and fire, and ‘threshing’ Israel) would only fully fit Yahweh himself; other figures (principally the Davidic and Aaronic Messiahs, and the Son of Man of 1 Enoch) would only be expected to fulfil part of the role (e.g. none but Yahweh was thought to bestow the Spirit), and then precisely as Yahweh’s agent. John thus primarily stresses the coming of God (ch. 8), while secondarily (and in vague fashion) affirming that at the historical level this would take place in the coming of his (deliberately undefined) messianic agent. With Dunn, ‘he shall baptize with Holy Spirit and fire’ is considered authentic (and Webb offers new arguments); but against Dunn, it is construed not as a single ‘baptism’ in both elements but as the granting of the Spirit of holiness to the righteous, and a consuming of the unrepentant in fire. On Lk. 3:17, Webb argues that the picture is not of the coming one’s winnowing Israel (separating wheat and chaff); for the instrument in his hand is not a threshing fork but the spade used to transfer the grain to the granary and to shovel the chaff into the fire. In other words, John’s preaching has effected the winnowing; the one to come simply accomplishes the final stage of purifying Israel by destroying the wicked and granting the Spirit of holiness to the repentant. This means, in turn, that for John the imminent judgment is not the apocalyptic end of the world (as is so often held), but God’s coming to Israel in history to restore her through his agent.

In chapters 9 and 10, Webb offers a typology of prophetic figures in Second Temple Judaism, and argues in the light of the above (against e.g. Horsley and Hanson) that John does not fit the category of a solitary oracular prophet, but that of the ‘popular leader prophet’—i.e. a charismatic, new-Exodus prophetic leader who attempted to create the true Israel, and promised her imminent deliverance from oppression. His closest analogies are the various messianic prophetic figures from ‘the Samaritan’ of Pilate’s time to ‘the Egyptian’ of Felix’s—all figures round whom the populace flocked awaiting God’s deliverance, and all savagely suppressed by the authorities as seditious. John naturally met the same fate.

This long, detailed and important work is very thoroughly researched, the argument is always clear and fair to the evidence, the original contribution to scholarship unquestionable. One may cavil here or there. For example, not all will be convinced that he has defeated Jeremias on the question of the date of Jewish proselyte baptism. More significantly, I think, he underestimates the difficulty Jews would have with the idea of a messianic figure ‘giving’ the Spirit. It would be much easier for them to think of a figure mightily anointed with the Spirit, whose advent and activity was experienced as a deluge of the fiery Spirit upon him—and one figure fits the bill better than any other: namely, the Davidic Messiah of Is. 11:1–4, It is the language of that oracle which has been most influential in the expectation of a Spirit-endowed figure in Second Temple Judaism (Eisenman and Wise have recently added yet further examples), and even when e.g. the Aaronic or Enochian figures are described as figures of the Spirit, it is with allusion to the Davidic oracle (thus e.g. 1 Enoch 61:2 depends on 49:2–3, which is clearly modelled on Is. 11:1–4). So perhaps John’s promise concerning the expected one was not quite as ambiguous as Webb argues either. But all in all we should be thoroughly grateful to Dr Webb for this most useful and wide-ranging monograph, a model of method and judicious criticism.