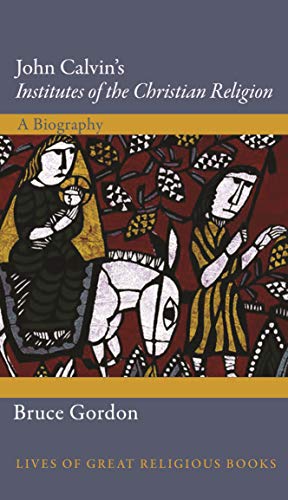 John Calvin’s ‘Institutes of the Christian Religion’: A Biography

The recent Calvin centennial of 2009 demonstrated the coexistence of two ‘worlds’ of Calvin study. On the one hand, 2009 made it possible for us to witness the rotation of the conservative evangelical/conservative Reformed ‘world’ of Calvin study. This is the world of ‘Calvin 500’, exemplified by the highly useful Theological Guide to Calvin’s Institutes (Phillipsburg, NJ: P&R Publishing, 2008). Some, but not all who noticed these first proceedings were also aware of a second ‘world’ of Calvin study which featured conference papers and issued publications such as Calvin and His Influence 1509–2009 (Oxford: OUP, 2011). So, ought we to speak of strictly parallel universes of Calvin study? Not quite. For these two orbits of Calvin discussion are not completely sealed off from one another. Select individuals such as Richard Muller, Herman Selderhuis and A. N. S. Lane enjoy the esteem of both ‘worlds’ and thus move easily between them.

Recognizing two distinct ‘worlds’ of Calvin study is a fundamental prerequisite for the appraisal of Bruce Gordon’s Calvin’s ‘Institutes’. It becomes clear that Gordon – and his volume – reflect the second, wider discourse on Calvin and Calvinism in which conservative evangelicalism has gone under-represented. Gordon is aware of a second world of Calvin discussion parallel to his own; he makes an attempt to acknowledge its existence (such names as Hansen, Piper, Driscoll and Keller are mentioned in passing). But this is a world that he struggles to understand and about which he makes errors of interpretation. In fairness, let it be said that the narrower orbit of Calvin discourse maintained within evangelicalism just as regularly misjudges the orbit in which Gordon works and writes.

It is the contention of this reviewer that the ‘biography’ of the Institutes can only properly be told by a narrative which draws on both the narrower world of discourse (with which conservative evangelicals are most familiar) and the approach embodied in this admirable literary effort. One without the other misses important elements, without which the story fails at comprehensive explanation.

As the author of a now-standard biography of Calvin (New Haven, CT: Yale University Press, 2009) and a history of the Swiss Reformation (Manchester: Manchester University Press, 2002), Gordon brings to his present task great gifts as an interpreter of the Reformation in its European setting. We need to take special note then, when he draws attention to a change of intellectual climate, roughly corresponding to the end of Calvin’s career, which soon rendered the Institutes unsuitable for use even by those of undoubted orthodoxy. By 1600, the Institutes were achieving usefulness primarily in edited-down compendia. This soon, the full Institutes had become a kind of ‘totem’, an emblem of the Reformation era in its fullness. The Puritan age regarded it so, while soon coming to rely on more recent Reformed dogmaticians.

The following century, the eighteenth, was one in which the Institutes were largely neglected – at least according to Gordon’s narrative. He grants that the Netherlands were one hold-out area. Yet some readers are aware that the Institutes were to be found in the library of the former slave trader-turned-preacher and hymn writer, John Newton. Evangelical historians are aware (while Gordon apparently is not) that the first 19th century translation of the Institutes in English was undertaken by John Allen in 1813 (a translation still in print well into the 20th century). Gordon is aware that the Institutes were reprinted at Geneva in 1818, but seems unaware that this took place at the instigation of the known-to-meddle British evangelical banker, Henry Drummond, who had a fascination with Calvin’s former city. Gordon’s account turns up facts we may be unfamiliar with; yet evangelicals can supply details of which he seems unaware.

As for the nineteenth century, Gordon’s focus (like that found in the recent volume, Calvin’s Theology and Its Reception [Louisville: Westminster John Knox, 2012]) is largely on Friedrich Schleiermacher, who used Calvin as a kind of foil for his own views. While this is undoubtedly true, Gordon’s account tells us nothing about the labors of the Pietist theologian August Tholuck (1799–1877), who worked to re-issue a Latin edition of the Institutes in 1834. Tholuck was a major influence on the young Charles Hodge in his period of European study. Similarly neglected is the stimulus provided to the study of Calvin by the evangelical stirring at Geneva (Le Réveil), commencing in 1816 and spreading throughout Francophone Europe. The importance of the republication program of the Calvin Translation Society (c. 1841) is briefly noted by Gordon; yet the impression is left that its influence was short-lived. Yet Spurgeon was still telling his students in the 1880s to “sell their shirts” to acquire the C. T. S. volumes; these same Victorian editions have been kept in print to this day by various Grand Rapids, Michigan publishers. Somewhat predictably, Gordon turns to relate the trans-Atlantic quarrels of Charles Hodge and J. W. Nevin over Calvin’s sacramental teaching. Yet we are left with the misimpression that Hodge’s change-averse Princeton was overly deferential to Calvin, when it is quite well known that the seventeenth century Genevan dogmatician, Turretin, had early displaced him.

Some of the most stimulating material Gordon has unearthed pertains to the meaning of the Calvin centennial of 1909 (to which the Christian world owes both the ‘wall of the Reformers’ and the marking of the execution site of Servetus at Geneva). Both in Europe and America, the Calvin commemorated in that year was a mirror image of the liberal democratic ideals of the ‘fin de siècle’ transatlantic world. Gordon also underscores the interpretation, made earlier by John Hesselink, that the twentieth century owes its renewal of interest in Calvin (as opposed to Calvinism) to the neo-orthodox titans, Barth and Brunner, and their celebrated quarrels of the 1930s. But this valid emphasis of Gordon cannot, by itself, account for the widespread recovery of interest in Calvin and his Institutes in popular Protestantism since the mid-twentieth century. A proper recounting of that story would require that attention be paid to the career of the late London minister D. M. Lloyd Jones (1899–1981), who secured the republication of the Institutes by James Clarke & Co. in 1949 (simultaneous with their American republication by Eerdmans), of the Banner of Truth magazine and movement (also associated with Lloyd-Jones) and the late James Boice (1938–2000), who inaugurated the influential ‘Philadelphia Conference on Reformed Theology’ in 1974.

Not to be missed are Gordon’s concluding chapters on the role of the Institutes in both Africa and Asia. Christian leaders in both cultures have found Calvin’s doctrine of principled resistance to illegitimate authority a tonic in coming to terms with regimes (sometimes professedly Christian) which work injustice. This entirely legitimate appeal to the Institutes provokes the consideration that in the West, Calvin may have been domesticated by his loudest supporters.

All in all, Bruce Gordon’s Calvin’s ‘Institutes’ is recommended reading. His volume provides a needed corrective to evangelicalism’s sometimes ‘privileged’ appeals to Calvin, which are the outworking of the tendency to exaggerate his influence beyond what the evidence will bear. But Gordon’s volume is not quite the whole story, for evangelical Christianity’s ongoing relationship with Calvin and his Institutes has played a more significant role in the larger story than this account allows.