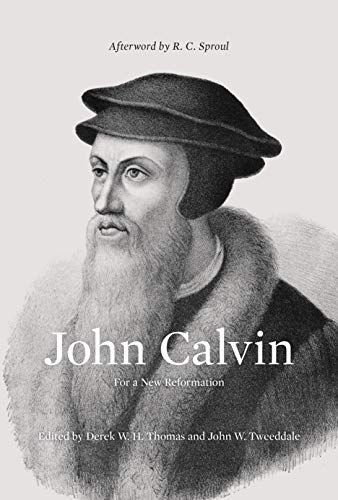 John Calvin: For a New Reformation

Derek Thomas and John Tweeddale have edited a new book that brings together respected historians and theologians to provide an up-to-date overview of John Calvin’s ministry and theology in light of current scholarship. The aim was not to publish a volume for the academy (though the academy will certainly benefit from the chapters), but to produce a work for the church in general. Instead, the volume was written with the hope that “pastors, elders, Sunday school teachers, Bible college students, seminarians, and serious lay readers” (p. 12) would pick up the reformer and read for themselves.

The book is broken down into two main parts. Part 1 introduces the reader to the life and ministry of Calvin. Michael Haykin and Stephen Nichols cover Calvin’s early life and how he came to Geneva. Both Haykin and Nichols provide valuable background information for understanding Calvin’s ministry. When Calvin returned to Geneva in 1541 after his exile, he settled into his pastoral labors. David Calhoun, Douglas Kelly, Robert Godfrey, and Steven Lawson unpack Calvin’s pastoral work, including his labors in the Consistory, the friends who surrounded Calvin, and Calvin’s preaching ministry. In some works on Calvin, the ground covered by these men is sometimes confined to a one, two, or even three chapters. Dividing Calvin’s life and ministry into seven chapters provides space for the authors to pay attention to important details. This results in a book that provides a helpful and thorough introduction to the overall life and ministry of the reformer.

Part 2 describes Calvin’s theology. The subject matter moves along in what might be described as theological order. First, K. Scott Oliphint explains Calvin’s doctrine of Scripture . From there, reputable theologians like J. V. Fesko, Burk Parsons, Joel Beeke, Paul Helm, and others consider God’s act of creation and works of providence, the law of God, the person and work of Christ, and the role of the Spirit. After discussing how the Spirit has sovereignly worked to bring sinners to Jesus, the book progresses through Calvin’s understanding of the Christian life, the role of adversity, the Church as Mother, God’s preservation of the saints, and eschatology. The only chapter that seemed out of place was the chapter on predestination. However, placing predestination here in the book is consistent with Calvin’s own decision to move his discussion of predestination from Book 1 (cf. 1539 edition) to Book 3 in the 1559 edition of the Institutes. Derek Thomas explains that Calvin moved the discussion of predestination to Book 3, in part, because election was a “family secret” (p. 220; cf. Institutes 3.21.1–2). However, in chapter 16 Paul Helm unpacks Calvin’s predestinarianism by carefully defining the term, explaining related concepts like election, reprobation, and foreknowledge, showing how predestination and the larger category of divine providence relate, and articulating how Calvin saw Christ as a mirror in election. These elements combine to provide a window into what is perhaps Calvin’s most famous doctrinal contribution.

The book closes with two short chapters. In the “Afterword,” R. C. Sproul reminds us that what we need in this age are those like Calvin (p. 578). Perhaps God will use the works of the great Reformer to raise up such persons. To that end, John Tweeddale closes the book by offering several suggestions on how someone might begin to read Calvin.

There are several strengths to this work that deserve mention. First, every chapter provides helpful background information that sheds light on Calvin. For instance, Stephen Nichols takes time to give the reader insight into the history of Geneva rather than turning immediately to Calvin’s time in the city (pp. 42–52). Or, consider how Derek Thomas provides the historical context to Calvin’s sermons on Job (pp. 426–29). This type of work strengthens the book by helping us understand the historical context of Calvin’s life and ministry. Second, practical applications are offered to the reader throughout the book. As an example, Edward Donnelly explains Calvin’s view of the Christian life and provides practical application for today. Likewise, Paul Helm, who unpacks the doctrine of predestination, does not leave the idea hanging in the air. Instead, he shows how this “dreadful” doctrine is useful, as it is integrally tied to God’s “meticulous” providence (p. 465). For example, “someone who believes that nothing happens by chance … will come to regard what befalls him or her differently from someone who thinks that evils may happen for no reason at all” (p. 466). Though some may find such applicational material distracting, we must remember that the book is aimed not merely at academics but is written “for the church” (p. 12). Finally, the book is full of footnotes that provide the motivated reader with plenty of trails to follow if they are inclined to take deeper dives into the study of Calvin’s ideas. As someone who teaches a course on Calvin’s Institutes, I have used several resources to introduce students to Calvin’s life and theology. However, John Calvin: For a New Reformation provides a single resource that I can trust to do the overview work and do it well.

In terms of weaknesses, one thing missing is a stand-alone chapter that introduces the reader to the larger writings of Calvin. Unfortunately, students of Calvin have too often restricted their engagement to his commentaries or the Institutes and ignored his other writings (e.g., tracts, letters, sermons, etc.). Though Tweeddale provides some comments about Calvin’s larger corpus at the end, a chapter that gives historical context and introduction to this part of Calvin’s legacy would have been a welcome addition, perhaps something like Wulfert de Greef, The Writings of John Calvin: An Introductory Guide, trans. Lyle D. Bierma(Louisville: Westminster John Knox Press, 2008). Additionally, the book’s overall size (over 600 pages) will likely intimidate many non-academics who might otherwise benefit from this resource.

Nonetheless, Thomas and Tweeddale have produced a volume that overviews Calvin’s life and teachings with clarity, conviction, and in a pastorally compelling way. As the Lord has used Calvin to help so many see and savor Jesus Christ, may he use this book towards that same end.