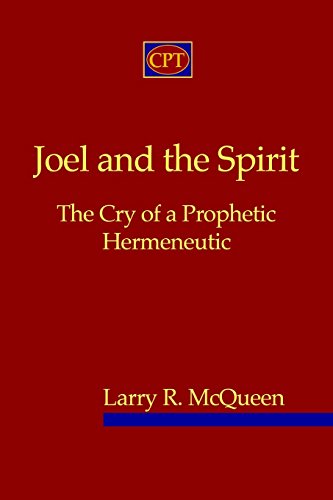 Joel and the Spirit: The Cry of a Prophetic Hermeneutic, (Journal of Pentecostal Theology Supplement Series 8)

Following an introductory discussion on hermeneutics and questions regarding the unity and date of the book of Joel, McQueen analyses the theses of Joel with particular focus on their relation to the promise of the Spirit. In this context, the literary structure, genres and themes of the book are outlined. The main thesis of the book is that Joel has three movements, namely the themes of lament, salvation and judgement, and that these are integral to the promise of the Spirit in both the text of Joel as well as its appropriation and fulfilment in the NT and today. Since the promised outpouring of the Spirit is set in the context of these three movements, lament (repentance) is seen as a prerequisite for the giving of the Spirit, salvation is seen in the presence of Yahweh among his people, who have become a prophetic community through his Spirit, and finally the Spirit’s outpouring is a sign of the judgement to come. McQueen then demonstrates how the NT appropriates all three themes in relation to the outpouring of the Spirit. The call to repentance (lament) leads to salvation and creates an eschatological prophetic community. In this context, the Spirit brings purifying judgement upon the community and also becomes a sign of coming universal judgement on the day of Jesus Christ. These same themes provided the essential framework for understanding the reception of and life in the Spirit in the early years of the Pentecostal movement. Lament, or ‘praying through’ or ‘tarrying’ was very important. There was also an eschatological understanding of salvation and an emphasis placed on the second coming of Christ with its impending judgement. In conclusion, McQueen shows how contemporary Pentecostalism has lost its eschatological orientation and apocalyptic spirituality and urges the movement to refocus and re-vision. The movement needs to recover its eschatological framework, recover lament as a part of its prayer life and become a prophetic community which serves as a sign of both salvation and judgement. In this way, the book of Joel has a relevance for Pentecostals today and can make an important contribution to the present needs of the movement in its attempts to re-vision.

I really enjoyed reading the book and was challenged by it. Among its many advantages is the fact that it is well written, easy to read and lucid in style. The author challenges us to ask not only, ‘how do we interpret the book?’, but also ‘how does the book of Joel interpret us?’ It is an opportunity to encounter God in the biblical text. This work is a very important contribution to the debate of Pentecostal hermeneutics and the need to re-vision the Pentecostal movement.