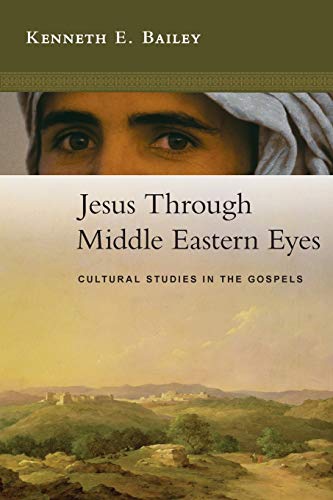 Jesus Through Middle Eastern Eyes: Cultural Studies in the Gospels

When confronted with Kenneth E. Bailey’s book, my initial reaction was that this is going to be “yet another book on the life and ministry of Jesus.” However, it was a pleasant surprise to discover that a lot could be learned from this volume. These new insights stemmed primarily from the approach conveyed by the title of this volume: Jesus Through Middle Eastern Eyes. It is this particular point of view that gives the book its distinctiveness.

The book is made up of six parts: (1) the birth of Jesus, (2) the Beatitudes, (3) the Lord’s Prayer, (4) the dramatic actions of Jesus, (5) Jesus and women, and (6) the parables of Jesus. The contents of these parts are in the form of textual studies with cultural-based interpretations. There are thirty two chapters in all. The author’s style is clear. He first discusses pertinent textual and literary features, then provides a commentary on the text under discussion, and concludes each chapter with a clear summary of the salient features discussed.

While all of the sections are thought-provoking, the first section, “The Birth of Jesus,” is noteworthy. Bailey argues that over the centuries, traditional understandings of the birth narratives have obscured the true meaning and message of the text (p. 25). This imprecision can be combated by re-reading the text bearing in mind cultural customs and attitudes contemporaneous to the text and by consciously stripping away long held traditions that have blinded us to Middle Eastern culture and customs that still remained unchanged even up to this day.

For nearly all the textual studies in this book, Bailey makes use of a device that he calls “Prophetic Rhetorical Template.” Such a template has seven inverted stanzas with a climax in the center, where “the first three stanzas relate to the last three in an inverted manner and a special point of emphasis appears in the centre” (p. 355). He notes that these rhetorical styles are clearly Jewish and can be traced to the Prophetic literature. The reappearance of these styles in the New Testament clearly indicates that these texts came out of a Jewish, not Greek world. It is that Middle Eastern world that the author sets out to reconstruct. While the application of the prophetic rhetorical template fits with most of the texts discussed, on a few occasions it seems rather forced and does not work very well as in Luke 18:1–8 (p. 262), 10:25–37 (p. 291), or 19:11–27 (p. 399).

At the heart of this cultural approach to the Gospels is Bailey’s appeal to recognize the historical nature of the Scriptures. He emphasizes that the Word of God is spoken through people in history: “Those people and that history cannot be ignored without missing the speaker or writer’s intentions and creating our own substitutes for them” (p. 281).

The distinctiveness of these essays is their interaction with early Syriac and Arabic Christian literature on the Gospels, such as the powerful ideas of Ibn al-Tayyib, a medieval scholar from Baghdad. Interaction with Arabic versions of the New Testament (translated from Syriac and Coptic) also provide insights into Eastern exegesis of the Bible. Since these linguistic sources share the broader culture of the ancient Middle East “… all of them are ethnically closer to the Semitic world of Jesus than the Greek and Latin cultures of the West” (p. 12).

The great strength of this work is the author’s familiarity with Middle Eastern culture. He succeeds in shedding new light on well known Gospels stories from a cultural perspective. Another valuable contribution of this book is the introduction to, and interaction with, great Eastern commentaries long forgotten or largely unknown to Western Biblical Scholarship.

Jesus Through Middle Eastern Eyes is a very readable book and will be profitable to various levels of readers: pastors will find a wealth of ‘sermon’ material; academics will benefit from interpretations that emerge from interaction Middle Eastern scholarship; interested lay persons will find that Bailey’s work could serve equally well as an informative, devotional book. Anyone interested in understanding the New Testament from its own distinctive Middle Eastern, cultural perspective ought to read this book.