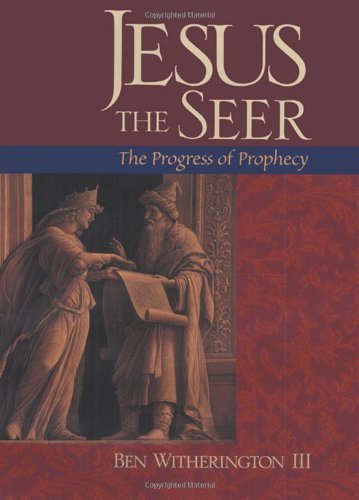 Jesus the Seer: The Progress of Prophecy

This book is a diachronic and cross-cultural approach to the study of prophecy: it examines the evidence for phenomenon of prophecy as it is found in sources relating to the eastern Mediterranean and the adjoining Middle east from the period c. 1600 BC to c. 300 AD.

The definition of a prophet is based on that of Grabbe. In Witherington’s words, ‘A prophet is a person who speaks in the name of a god (usually Yahweh) and claims to pass on a revelation from that god. Divine revelation is a sine qua non of prophecy’.

Lamenting the fact that most studies of Hebrew prophets and prophecy begin (and often end) their discussion with the writing prophets of the eighth century BC and later. Witherington chooses instead to begin further back with an account of ‘the larger ‘cross-cultural prophetic culture that had been extant for centuries’. Thus he begins with the discoveries of an archives of cuneiform tablets at Mari on the Middle Euphrates. These tablets include terminology similar to that in the OT from a period well before the era of classical prophecy, and they indicate the practice of consulting such figures about the future.

Discussion of the evidence from Mart is followed by non-Israelite evidence from Ammon concerning the mysterious figure of Balaam know also from Numbers, and these two discussions underlie Witherington’s thesis that Israelite prophecy was part, of a larger phenomenon of Semitic culture that Israel shared with its neighbours and which gave a role to both women and men. Successive discussions mover from pre-monarchic prophetic figures like Elijah and Elisha who appear at times of crisis, and in whose activity prophetic sign acts and miracles come to the fore whereas oracles recede into the background.

With Hanson, Witherington argues that apocalyptic emerged from prophecy. Contra Hanson, he sees it as having emerged during the exile in the writings of Ezekiel, although he allows that it developed fully only in the post-exilic age. In Daniel 8–12 is found the first example of ex eventu prophecy, and this phenomenon recurs in Inter-Testamental literature where apocalyptic dreams and visions supersede traditional oracular prophecy and it messenger formula. The living voice of prophecy has not died, however; it has just changed it voice. This shift, he suggests, arose from a conviction held by many Second-Temple Jews that they were living in an age of fulfilment. This contributed in turn to the rise of sectarian Jewish movements such as those based at Qumran or centred on John the Baptist or Jesus of Nazareth. Such Jews, suggests Witherington, were less interested in the generation of new prophecies than in the fulfilment of old prophecies.

Witherington’s descriptions of Jesus is as a prophetic sage, a Jewish seer and eschatological prophetic indebted both to the Elijah-like eschatological and messianic prophet tradition and also to the Son of Man figure of the apocalyptic tradition. His message was in considerable continuity with that of John the Baptist. This characterisation, argues Witherington, explains the majority of the authentic synoptic tradition. ‘It explains how Jesus viewed himself, why he acted as he did in regard to the signs, exorcisms and miracles, why he took the steps he did during the last weeks of his life, and why he suffered a violent end as a result.’ Along the way Witherington presents useful extended critiques of the recent work of Allison and of Wright.

Paul is also shown to be a prophetic figure, and three further chapters discuss the development of Christian prophecy from Paul and the situation at Corinth through NT and the other early Christian texts to the sources pertaining to Montanism. This includes a useful critique of Boring’s argument that the sayings of Christian prophets came to be blended with the sayings of Jesus. Just as OT prophecy was treated against its ancient Near Eastern background, so too these texts are discussed in the context of the polytheistic prophecy of the Graeco-Roman world.

This is a wide-ranging book, perhaps strongest in its discussion of Jesus material, and it breadth is both its weakness and its strength. Specialists in particular areas may wish to take issues with various details. For example, although Witherington is aware that no work of this nature can be exhaustive, nevertheless it is unfortunate that he laments the lack of monographs on Montanism when he appears to have missed the important contribution of Trevett. Those who have time to read the whole work should benefit from it, but sometimes it reads more as a series of useful discussions of different prophetic phenomena than as a continuously argued monograph. Nevertheless in an age of over specialisation this wide ranging book is to be welcomed both as a whole and as a collection of useful forays into various disputed questions along the way.