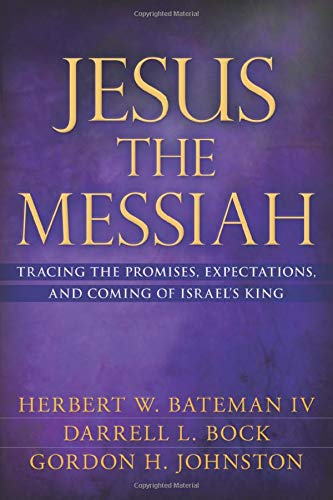 Jesus the Messiah attempts to trace the development of messianic ideas in Scripture from their introduction in the OT, through reflections in the second temple period, and finally through their fulfillment in the coming of Jesus. In the introduction Bateman sketches a common approach to messianic passages in the OT. In this approach messianic passages have one unambiguous meaning, and the authors of those texts clearly understood what they were predicting.

Contrary to this approach, Bateman sketches out the methodology of the present work. He argues that the implications of many messianic texts only become clearer in light of further revelation from God. This later revelation includes reflections in later canonical material and the life and teaching of Jesus. The three authors take turns assessing messianic passages in light of its original meaning in its historical setting, reflections on this material in extra-biblical literature, and finally Christological readings of the “First Testament” in light of Jesus. This work only deals with texts that deal with the Messiah as a regal figure.

In chapter one Johnston deals with messianic material from Genesis through Numbers. Johnston begins his discussion with God’s promise to Abraham regarding a singular seed and kings who would come from his line (cf. Gen 12:7; 17:6). Johnston also deals with Jacob’s statements regarding the scepter in Judah (Gen 49:10), and Balaam’s oracle regarding a coming “star” and “scepter” (Num 24:14–19). In an approach that is common throughout his interpretation of these passages Johnston says that while these texts are, “not exclusively and directly prophetic of the eschatological Messiah, they were ultimately prophetic about the One to come” (pp. 57–58).

In chapter two Johnston assesses God’s covenant promise to David (2 Sam 7:8–16). Like chapter one, Johnston sees the opportunity for initial and ultimate fulfillments of this passage. By looking at later reflections on this material the OT points to an initial fulfillment in Solomon (1 Kings 8:15–21), but this imagery is also expanded and developed in later revelation (e.g., Isa 9:6; 11:1, 10).

This pattern of interpretation continues into the Psalms. Johnston argues that a text like Psalm 2 could have originally celebrated the enthronement of David or Solomon, but that the vagueness of the text created a “divinely designed openness.” These themes would come to express the hope of a new Davidic dynasty (e.g., Jer 33:14–26). Early prophetic material highlighted the ways in which the promises God made to David came to refer to a coming eschatological messiah. In several of these passages (e.g., Amos 9:11–15; Micah 2:5–6) Johnston argues that the “idealized imagery and universal tenor” of the prophecies point beyond the realities of the postexilic community.

In Johnston’s treatments of Isaiah, Jeremiah, Ezekiel, and Daniel he highlights the developing messianic expectations. In light of the destruction of Jerusalem there were heightened beliefs in a messianic figure who would save or deliver God’s people. At the conclusion of his treatment on OT material Johnston declares: “as the Hebrew canon came to a close, the future eschatological expectation of the postexilic community was fixed on the coming of Yahweh as a universal king” (p. 209).

In chapter eight Bateman assesses various problems interpreters face in understanding the messianic views of the second temple period. He believes that the limited amount of texts that speak of a royal messiah, readers’ familiarity with NT imagery of Jesus, and a lack of historical sensitivity to this period all impede one’s understanding of second temple messianic ideas. He attempts to change a common misconception by highlighting that not every Jewish sect or individual was yearning for a messiah at this point. Bateman notes that Jewish hope in a messiah was dormant for a period of time because of a lack of outside interference from political authorities in the life of Israel. It was only later because of political oppression that messianic hopes were reignited.

Chapters nine through eleven assess Jewish messianic ideas in the second temple period. Bateman notes a major difference of opinion in the relevant literature as to whether there would be two messiahs, a priest and a king, or simply one messianic figure. He attributes this belief in a diarchy to interpretations of Zech 6:9–14 and dissatisfaction with the Hasmoneans, who had combined the role of priest and king. He also notes the messianic imagery of “branch,” “prince,” and “son language.” This language helped create a picture of the Messiah as a victorious ruler who had a unique relationship with God.

Bock assesses messianic developments in the NT in chapters twelve through fourteen. He begins with Revelation and the Catholic Epistles, which both emphasize the authority of Jesus. These works also focus on the suffering of Jesus as Messiah.

In chapter thirteen Bock turns his attention toward the Pauline Epistles. Bock argues that one of the major contributions of this material to Christology revolves around “in Christ” language. Bock also emphasizes the role that Ps 110 and the promises to Abraham played in Paul’s understanding of who Jesus was.

Finally, Bock looks at the contribution that the Gospels and Acts make to messianic beliefs. He argues that Acts was an attempt to legitimize the early church and its roots, and this led to an emphasis that focused on Jesus as the fulfillment of Jewish expectations. The gospels also focus on the identity of Jesus primarily by displaying his deeds. Mark focuses on Jesus as one who came to suffer and to give his life as a ransom for many (Mark 10:45). Because a suffering messiah was unexpected Bock sees this as Mark helping finish the “messianic puzzle.” Matthew attempts to connect Jesus to Israel’s promises to David and Abraham. Again, Jesus is discovered to be the Messiah not so much by what he says, but because of what he does (e.g., the connection of Isaiah 61 and the ministry of Jesus). In his chapter on John, Bock shows how seemingly contradictory messianic beliefs of the second temple period (e.g., where did the Messiah come from?) were being synthesized in Jesus (John 7:40–44).

The work concludes with a final chapter on the question of Jesus and his messianic identity. Specifically, Bock takes time to address the debated question of whether or not the confession of Jesus as Messiah goes back to Jesus himself. Bock argues that there was a necessary ambiguity involved in the way that Jesus described himself because he knew there was potential to misunderstand his messiahship in light of his suffering. While Jesus never personally used the title “Messiah” himself, he made his understanding of his identity clear in his deeds.

Bateman, Johnston, and Bock have written a volume that is incredibly helpful for tracing the development of messianic thought from Genesis through Revelation. There has been a recent trend to discover the ways in which the OT points to Jesus. This is not a bad trend, but in the process of finding Jesus in the OT readers run the risk of missing the historical and contextual meaning of many OT passages. There may be instances where readers disagree with the authors on specific points of exegesis or methodology. For example, some may disagree with Bock’s decision to begin his study of messianic claims in the NT with Revelation and the Catholic Epistles. While he does explain this approach, beginning with the finished messianic picture of these books can feel disjointed for the reader who has been placing the “messianic puzzle pieces” on the board for eleven chapters. This study could have had stronger continuity if the reader was able to continue to look at the trajectory of messianic beliefs before having to wrestle with a synthesized and completed messianic picture. Specific disagreements aside, if readers will take seriously the conclusions of this work, they will understand the relevant OT passages more clearly, the various ways that these messianic ideas developed, and they will gain a much deeper understanding of what it means to claim that Jesus is the Messiah.