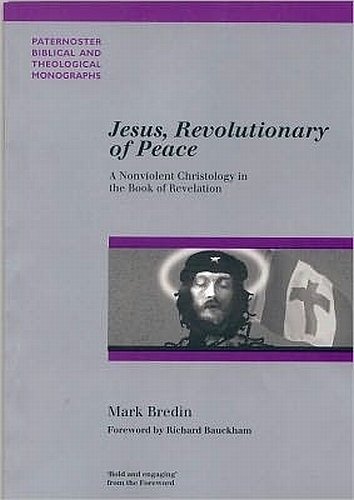 JESUS, REVOLUTIONARY OF PEACE. A NONVIOLENT CHRISTOLOGY IN THE BOOK OF REVELATION

This published doctoral thesis, directed by Professor Richard Bauckham, is welcome for its contribution to the study of Revelation’s Christology. Its ‘nonviolent’ claim caught my eye, Since violent imagery (especially in the sequence 19:19–20:15) embarrasses and even scandalizes many readers. Various interpretative moves aim to solve the problem of Revelation’s plagues, battles, lake of fire and the like: dismissing John as simply a vindictive, bloodthirsty author and either closing his book or reinterpreting its apocalyptic violence in non-violent categories for today; arguing that the book’s expectation is for human violence, in a world where injustice reigns and evil triumphs, to be met by retributive, divine violence wrought at the last judgement justifying Revelation’s desire for vengeance as a response to bitter persecution endured and as a longing for justice; identifying a rhetoric of shock by which John aims to create conflict and crisis where there is none, among complacent readers; and viewing the book’s violence through the lens of the violently slaughtered Lamb, cipher for the crucified Jesus of the Gospels.

For Bredin, Jesus is the revolutionary of peace—non-violent teacher and activist (ch. 2)—by analogy with the activist non-violence of Mahatma Gandhi (ch. 1) who was himself inspired by Jesus as the supreme example, in his teachings, actions and death, of faithful witness despite violent opposition. Overlooking uncritical espousal of the theories of René Girard at this point, I did expect the analogy with Gandhi to offer an original look at Revelation’s Jesus. Disappointingly, however, seventy-five percent of the book involves unpacking the analogy, surveying scholarship’s past treatment of violence/vengeance in Revelation (ch. 4) and then exploring inter-textual and historical contexts (OT, Jewish traditions, life in the Roman empire) which might account for John’s view of the world as plunderer and of Messiah Jesus as God’s kingdom peacemaker. Among these preliminaries, discussion of faithful witness in the OT and in Jewish traditions (chs 7 and 8) does offer useful preparation for reading this theme in Revelation.

Just fifty pages (part three) remain for studying three major and two minor christological figures (Jesus the faithful Witness, pierced Servant, Son of Man, Lamb and Rider on the white horse). Here, evidence is compiled to show that, in the supervisor’s words, ‘Revelation’s Jesus appears not as a violent revolutionary, but as a revolutionary against the force of violence’ (foreword). For Bredin, John has ‘appropriated the tradition … that the Messiah would be a Davidic, military conquering hero “but subverted it, achieving an opposing emphasis” on the suffering that God’s chosen must undergo’ (213–14); in particular, this is done by giving priority to the picture of a faithful witness, prepared to die, and by subtle reinterpretation of the warlike Rider (19:11–16) in the light of the slaughtered Lamb.

Bredin’s exegesis is useful and original, particularly in applying insights from parts one and two to the texts. He is right: a nonviolent Jesus is indeed to be taken seriously in Revelation. Nonetheless, establishing that Revelation’s Christology is fundamentally non-violent over against a range of influential (and often dissenting) scholarly views, surely required more interpretative space, and nuance, and much fuller interaction with other prior exegetical work than is provided here. On the latter point how, for example, did T. B. Slater’s important work on the Son of Man, the Lamb and the Rider (in Chirst and Community, 1999) ever come to be ignored?