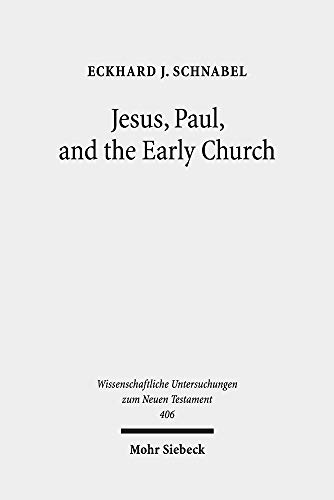 Jesus, Paul, and the Early Church is a collection of essays written over the past 25 years by Eckhard J. Schnabel, who serves as Mary F. Rockefeller Distinguished Professor of New Testament at Gordon-Conwell Theological Seminary. It includes seventeen essays, divided into three sections: “Jesus—Messianic Teacher” (chs. 1–2), “Paul—Missionary Theologian,” (chs. 3–7), and “The Early Church—Missionary Realities in Historical Contexts” (chs. 8–17).

The first chapter explores the degree to which the Gentile mission can be seen to be evident in Jesus’s ministry as recorded in the Gospels, and the second examines the purpose of Jesus’s silence in the trial narratives. The five essays in section 2 cover such topics as the introduction of foreign deities in Athens, repentance in Paul’s letters, the mission of the Church, ἡ λογικὴ λατρεία in Romans 12:1, and Pauline ethics. The third section includes a pair of chapters treating βαπτίζω/βαπτίζειν in the New Testament and in Greek, Jewish, and Patristic literature; one on Jewish opposition to Christians in Asia Minor; three dealing with various themes in Revelation; one on singing and music in the early Church; and two treating issues in Graeco-Roman religion (public confession in inscriptions in Lydia and Phrygia, and the knowledge of the divine). The final chapter discusses the missionary nature of the theology of the New Testament.

The range of topics covered in this collection is broad. Of course, this is not an edited volume of essays dealing with a narrow topic. Rather, it is a representative collection from Schnabel’s career. He notes in his preface that it is a common aspiration among European New Testament scholars “to engage in research and writing across all major areas of New Testament research, from Jesus to Paul and to the early church” (p. vii). So, while this volume is not one to turn to for a focused treatment of a particular theme, it is a fine demonstration of the valuable contribution that a scholar with varied interests can bring to the field of New Testament studies. In a context where specialization within sub-disciplines and critical approaches is increasingly common, Schnabel’s broad scholarship stands as a refreshing model.

Above all else, Schnabel’s scholarship can be described as careful, focused on the primary sources, and sensible. By “sensible” I mean that he rarely, if ever, will accept overstatements that are not supported by the text. In chapter 5, “Evangelism and the Mission of the Church” (which first appeared in God and the Faithfulness of Paul: A Critical Examination of the Pauline Theology of N. T. Wright, WUNT 2/413 [Tübingen: Mohr Siebeck, 2016], 683–707), Schnabel notes Wright’s assertion that Paul sought to establish “messianic communities in the very places where Caesar’s power was the strongest” (p. 156, referencing Paul and the Faithfulness of God [Minneapolis: Fortress], 1502). This, Schnabel responds, “does not explain Paul’s actual travels hinted at in his letters and explicitly mentioned in the book of Acts,” which he proceeds to demonstrate with an overview of the relevant texts (pp. 156–57).

Similarly, Schnabel’s careful and methodical approach is demonstrated in chapter 2, “The Silence of Jesus,” in which he spends 45 pages conducting a close study of the four Gospels’ presentation of Jesus’s response to questions from disciples, opponents, and others, his response to questions in his trial, and his moments of silence in his trial, in order to establish a clear picture of the significance of this silence. Schnabel’s close examination of Jesus’s characteristic willingness to speak is effective in shedding light on his moments of willful silence.

Three essays of this volume are primarily focused on Greco-Roman texts and inscriptions: chapter 3, “Introducing Foreign Deities: The Documentary Evidence”; chapter 15, “Divine Tyranny and Public Humiliation: A Suggestion for the Interpretation of the Lydian and Phrygian Confession Inscriptions”; and chapter 16, “Knowing the Divine and Divine Knowledge in Greco-Roman Religion.” Each of these provides a helpful orientation to an aspect of the context with which the early Christian movement was engaged. “Introducing Foreign Deities” offers a survey of literary and documentary (i.e., epigraphic) texts that demonstrate the seriousness with which the Athenian city council would consider the introduction of new deities, and the potential risks of promoting unsanctioned gods. I was a little surprised that he did not refer to Bruce Winter’s work on this issue (“On Introducing Gods to Athens: An Alternative Reading of Acts 17:18–20,” TynB 47 [1996]: 71–90), but his conclusions are much the same: “The permission of the Council included, at least in some cases, detailed stipulations concerning sacrifices, processions, and financial matters relating to the cult, which would make matters difficult for the new community of worshippers of Jesus Messiah. Thus Paul argued before the Areopagus Council that he was not introducing “new gods” (pp. 115–16).

As a final note, Schnabel holds a valuable place as one who naturally straddles both German and Anglophone scholarship. While all the chapters of this volume are written in English, the footnotes are a treasure trove of German scholarship. Anyone wishing to find German scholarship on these topics will find the book to be a welcome resource. In all, this is an excellent volume on a range of topics that will be a valuable addition to any library.