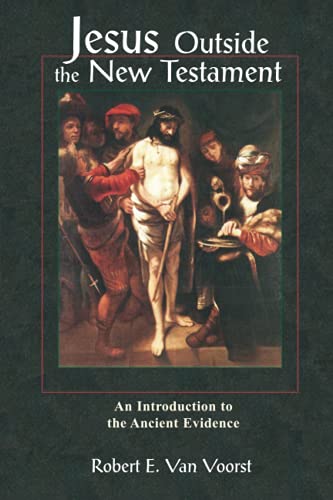 Jesus Outside the New Testament: An Introduction to the Ancient Evidence

This book does what it says on the cover and offers a useful introduction to and survey of traditions about Jesus preserved by secular writers, Jewish writers and traditions, and the non-canonical writings of early Christianity. Copious citation of the ancient evidence in English translation will make it a useful resource for students, and some full footnotes will make tracking down secondary discussions and primary language texts a possibility for those interested.

Van Voorst begins with an interesting survey of the sceptical arguments (or at least assertions) against the historic existence of Jesus. He then discusses a range of ‘classical’ writings that refer to Jesus (Thallos, Pliny, Suetonius, Tacitus, Mara bar Serapion, Lucian of Samosata and Celsus). His discussions of Pliny, Suetonius and Tacitus are helpful and cautious, pointing out that much of their information about Christ must have been drawn from encounters with Christians (although perhaps Suetonius and Tacitus had access to additional sources).

On Jewish writings Van Voorst has a full and cautious discussion of Josephus’ references to Jesus, concluding that Josephus did include a moderate and neutral description of Jesus’ ministry which was improved by Christians. He notes that Josephus connects Christ with his followers, the Christians, and suggests that Josephus’ knowledge of Jesus may have also been derived in part from encounters with Christians. Paul Barnett recently made the important point that this common feature among non-Christian references to Jesus can only be explained by a consistent perspective among these Christians, that is a self-consciously backward looking and even historical perspective in which their contemporary sense of identity was expressed in relation to a Jesus of past history (Barnett, Jesus and the Logic of History).

Van Voorst discusses a range of rabbinic material concluding that rather than preserving historical memory most of it arose in polemic against Christians. He is (rightly) negative about attempts to find Jesus in the Dead Sea Scrolls or medieval Jewish literature (Toledoth Jesu).

An oddity of this book, never really defended, is a whole chapter on Jesus in the Sources of the Canonical Gospels (M, L, Q, and the Signs Source). Although not without interest, and generally fairly cautious, this material is known from inside the NT, and its appropriateness within this book is questionable.

The last chapter discusses (with ETs) Jesus in later Christian writings and concentrates most attention on the unwritten sayings of Jesus, seven or eight of which might be authentic; the Coptic Gospel of Thomas, the Gospel of Peter, the Secret Gospel of Mark and the Ascents of James. He misses some details here, especially the early Greek papyri of both Thomas and Peter and is, in my opinion, a bit too positive on Thomas’ date and significance. This is a huge issue but one example might suffice. Van Voorst argues that ‘the lack of christological titles in the Gospel of Thomas may indicate that Jesus did not claim these for himself (203). Notwithstanding the complexity relating to Jesus’ claims for himself, this argument ignores the clear anti-christological Tendenz intrinsic to the theology of Thomas (note the revision of the Caesarea Philippi confessions in Saying 13). I remain something of a doubting Thomas on this issue.

OK. A summary paragraph. This is a useful book, appropriately cautious in most areas, with a lot of valuable and up-to-date bibliographical material in the notes. I am sure I shall refer to it again in the future.