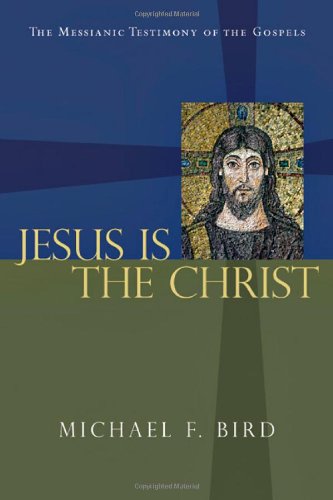 Jesus Is the Christ: The Messianic Testimony of the Gospels

When did Jesus become the Messiah? Did Jesus ever personally claim to be the Messiah? In the opening pages of Jesus is the Christ Michael Bird summarizes a common answer to these questions in biblical scholarship. He argues that Jesus never took this title for himself, and that his earliest followers ascribed the title “Messiah” to him after he had died. This desire to honor Jesus as Messiah could have come from a vision, belief that he had risen from the dead, or an expectation that he would return.

Jesus is the Christ is Bird’s response to this line of thinking. He notes that this work is a follow-up to his previous study, Are you the One Who is to Come? In his first book, Bird argued that Jesus did claim to be Israel’s Messiah. The present book builds on that claim. It argues that Jesus’ identity as the Messiah was a foundational truth for early Christian thinking, and that it dramatically impacted the shape and focus of the canonical gospels. As Bird says, he believes “that the messianic identity of Jesus is the earliest and most basic claim of early Christology” (p. 7).

In the introduction, Bird addresses the topic of when the title “Messiah” started to be applied to Jesus. He offers a brief sketch of messianic hopes in the first century, and shows how Jesus’ words and deeds made clear his messianic claims even if he never used the title Messiah for himself. Specifically, Jesus’ focus on the kingdom of God, performance of messianic activities (e.g., riding into Jerusalem on a donkey), and the charge he faced at his death all contributed to this picture.

In the rest of the introduction Bird responds to several competing views about how Jesus came to be known as Messiah. In particular, he addresses the idea that a vision of Jesus or belief in his resurrection could lead to messianic beliefs. In particular he notes, “There is nothing about a resurrection that would automatically imply messiahship” (p. 22). Calling Jesus Messiah would not have been the natural or expected reaction to a belief that he had risen.

Following the introduction Bird turns to the content of the individual gospels and Acts. In particular, Bird sets out to show that the structure and content of the gospels highlight how central the belief that Jesus was the Messiah was to the authors. Because of this he also highlights the ways in which the gospels answer objections to Jesus as the Messiah, or seek to persuade their readers of Jesus’ messiahship.

Bird begins with a study of Mark’s Gospel. Throughout he argues that one of the main purposes of this gospel is to answer Jewish objections to the belief that Jesus was the Messiah. Bird assesses the narrative flow of Mark, and sees Jesus as the crucified Son of God at the center of Mark’s purposes. He also highlights the prominence of messianic themes in Mark through a focus on “king” language, rhetorical strategies (e.g., Jesus’ passion as an anti-type of a Roman triumphal procession), and attention to the messianic titles that occur throughout.

In his chapter on Matthew, Bird argues that this is a gospel concerned with placing Jesus squarely in the story of Jewish history. The genealogy and birth narratives are read as a whole that presents Jesus as, “the Davidic King who brings deliverance to Israel in exile and encompasses Gentiles in the scope of the salvation that he achieves” (pp. 66–67). Bird also gives attention to Jesus as the “Son of David.” He argues that, for Matthew, Son of David was a term that highlighted the therapeutic ministry of Jesus, based on Isaiah 61, and his role as the shepherd of Israel. Finally, Bird notes that the works of Jesus throughout this gospel align with expected signs of the messianic age.

The following chapter on Luke and Acts has a similar emphasis on Jesus and his Davidic lineage. Bird argues that this focus comes from a desire to “show the continuity of the church with the promises of Israel, and to demonstrate how the work of Jesus and his followers represents the fulfillment of those promises” (p. 79). The infancy narratives are an important piece of evidence in this regard. Throughout that narrative Luke draws connections between Jesus and the restoration of the Davidic kingdom. A similar focus is apparent in the sermons throughout Acts. Those early sermons show a clear emphasis on declaring Jesus to be the fulfillment of God’s promises to Israel.

In chapter four, Bird addresses the issue of Jesus’ messiahship in John. Bird situates the messianic Jesus in John within the framework of other eschatological-messianic figures found in second temple literature. This type of exalted figure is apparent in John’s discussion of the pre-existence of the Messiah. Bird is quick to point out that belief in a pre-existent Messiah would not have been unheard of at the time and that it could be implied from a number of Jewish texts. He also emphasizes the role the signs in John’s Gospel play in achieving John’s purpose of convincing readers that Jesus is the Messiah (John 20:30–31). While John’s Jesus may look different than the Jesus of the Synoptics, it is a presentation of the Messiah that is squarely within early Jewish beliefs.

Bird makes a number of helpful contributions in this volume. First, he clearly demonstrates that the messiahship of Jesus was a predominant focus for the gospel writers. Rather than being a peripheral issue, Jesus as Messiah was a core Christian conviction; these authors wanted to convince their readers of that fact and answer objections to it.

He also gives attention to the multi-faceted nature of messianic belief in the second temple period. Throughout his work on the gospels he shows the unique interest that each author had on showing how Jesus fulfilled various aspects of this expectation. This allows the readers to develop their understanding of what it means to say Jesus is the Christ. Bird offers an explanation of this statement that is informed and shaped by Jewish messianic expectations of the first century.

In a book that introduces and discusses so many debated issues it is likely that the reader may disagree with Bird on specific points of exegesis or historical reconstruction. For example, in the introductory chapter Bird attempts to demonstrate that messianic expectations in the first century were not as wide spread as is commonly believed. To prove this he argues that only Jesus of Nazareth and Simon bar Kokhba were ever unambiguously called “Messiah.” He then notes that there were other figures who “emerged from time to time who excited hope for future deliverance, set themselves up as royal claimants, and echoed biblical traditions in their actions, but few as far as we know were explicitly hailed as messianic leaders” (p. 5). However, is it necessary to divide these two categories of people as definitively as Bird has? Would first century readers have seen a clear division between those explicitly called messiah and royal claimants who excited hope for deliverance? Even without evidence that these people were explicitly called “Messiah” they were performing the kinds of actions that would have incited messianic hopes.

While there may be specific instances where the reader disagrees with Bird, his main argument is persuasive throughout. The confession “Jesus is the Christ” was central to early Christian belief, and it played a crucial role in how the gospel writers framed their narratives. This work would also be helpful for readers trying to gain a better understanding of messianic expectations and conceptions in the second temple period.