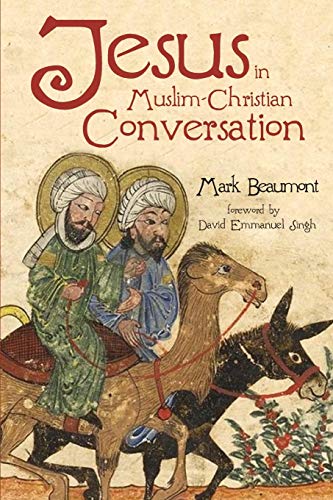 They say, “You can’t judge a book by its cover.” Once again, I learned this lesson the hard way. When I received Mark Beaumont’s book Jesus in Muslim-Christian Conversation, I naturally read the back-cover description. Two words that appear in that description and in the author’s Preface set me on edge. The first word was that Jesus is “central” to Islam, juxtaposed (correctly) with Jesus being “the very center of the Christian faith” (p. ix). While Jesus indeed is an important figure in Islam, he merely plays supporting actor to Muhammad’s lead.

Second, the back-cover features two fictional conversationalists, identifying them as the “representative” voices of Islam and Christianity (p. ix). Themelios readers can imagine the challenge of finding a “representative” voice for all of Christianity. From whence could such a voice emerge? Would it be an American Evangelical? A Korean Presbyterian? An African Pentecostal? A scholar? A layperson? The same daunting challenge exists in finding a truly representative voice for a world religion as diverse as that of Islam.

Despite these challenges, Mark Beaumont, an expert in the field of Islam, provides a brief work that is chocked full of important theological information. In a world of lamentable syncretism, his treatment of the interfaith Christological discussion is accurate and something biblically-conservative Christian readers will find to include a trustworthy presentation of the biblical Christology. Here are four of the book’s main merits.

First and foremost, the christological question is critically important. Both Islam and Christianity have a role for Jesus, though his identity is contested. Is he merely a great prophet as Islam teaches? Or is he Lord, Savior, and the Son of God as Christianity teaches? This is a most important question for each individual heart, as eternity hangs in the balance.

Second, Beaumont selects fictional “representative” conversationalists that are indeed champion figures. Christians and Muslims comprise over half the world’s population, with 2.4 billion of the former and 1.8 billion of the latter. Thus, there are today 4.32 x 1018 possible conversations between an individual Muslim and an individual Christian. (Of course, language and gender barriers would need to be overlooked.) Typed out, the possible number of Muslim-Christian interactions is 4,320,000,000,000,000,000!

Beaumont’s well-informed scholars interact respectfully in these conversations, responding back-and-forth to each other’s best points and arguments. Beaumont concedes that “Paul,” the Christian representative, an American evangelical who has lived and taught in the Middle East, is similar but not identical to himself. “Ibrahim” is the Muslim conversationalist, a Sufi who follows this more mystical bent of Islam. Yet, Ibrahim is still a scriptural literalist when it comes to Islam, as is Paul regarding the Bible. Both readily cite their own and the others’ scriptures in addition to pertinent secondary sources, including Augustine and the Hadith, sayings of Muhammad.

Third, Beaumont has the conversationalists, Paul and Ibrahim, present virtually every theological angle related to the following christological subtopics: Jesus’s birth, miracles, teachings, divine sonship, messianic claims, redemptive work, and second coming. This alone makes the book an instructive read for students of Christology. Though not overly combative, Beaumont’s conversationalists do not gloss over their differences.

Fourth, Paul and Ibrahim provide excellent interaction with modern scholarship. For example, Beaumont has Ibrahim enlist the support of modern liberal Christian scholars, such as Rudolf Bultmann (pp. 32, 199), John Hick (pp. 36, 208), Stanley Samartha (p. 208), as well as John Dominic Crossan of the Jesus Seminar (pp. 161, 199). Their skepticisms assail the high Christology of the Bible, mirroring the Islamic Christology on many points. Also, regarding the 2007 “Yale Response” to the Islamic Common Word inter-faith overture, the Christian conversationalist Paul provides an astute warning: “Some Christians responded to the Common Word document by saying that they were being invited by the Muslim scholars to enter Islam by accepting a Muslim version of Jesus” (p. 141).

What is left unaddressed? The book concludes somewhat abruptly with material concerning Christ’s second coming. It ends with no summary statements, final arguments or overall conclusions offered by the conversationalists Paul and Ibrahim.

One lingering question is whether this Islamic Jesus and the biblical Jesus indeed point to the same actual historical figure. Ibrahim merely protests to Paul, “We are discussing different conceptions of Jesus and how they related to one another” (p. 113). Yet this does not resolve the main theological question. By analogy, suppose we asked, “What do you think of Thomas Jefferson?” Person A might respond, “President Thomas Jefferson was one of the Founding Fathers of the United States and the main author of its Declaration of Independence. Quite a man!” Person B may counter, “This may be true, but Thomas Jefferson was also a slave owner.” Person C may yet respond, “I don’t like Thomas Jefferson. He parks his Ford in a way that sometimes blocks my driveway.” In this discussion, Person A and Person B offer different opinions about former president Thomas Jefferson (1743–1826), while Person C clearly talks about another person with the same name.

In Islam, Jesus is explicitly not divine. In the Bible, Jesus the Son of God is an inviolable part of the Godhead. Given these “mutually exclusive” options, Beaumont’s conversationalists leave the reader still wondering if Christians and Muslims talk about the same Jesus. Perhaps this final pondering is intentionally left for the readers of this commendable, theologically-robust work. Jesus in Muslim-Christian Conversation ranks in usefulness with Jeff Morton’s creative 2 Messiahs, in which the Islamic Jesus and the biblical Jesus find themselves talking to each other as they walk down the road together!

Fred Farrokh is a Muslim-background Christian who currently serves as an International Trainer with Global Initiative: Reaching Muslim Peoples.