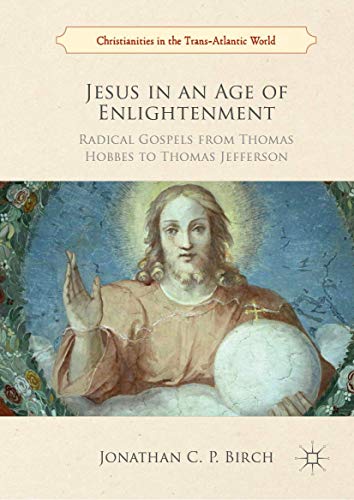 Jesus in an Age of Enlightenment: Radical Gospels from Thomas Hobbes to Thomas Jefferson

Major historical shifts affect the life and thought of individuals and societies over centuries. Accordingly, one can hardly undervalue the Age of Enlightenment. Many of its protagonists tried to rethink old truths and articulate new ideas while promoting different (and differing) worldviews in the long term. Considering their commitment to progress, intellectual autonomy, and the like, how did the proponents of that era assess the religious imprint of their time and culture?

In his well-researched study, Jonathan Birch, tutor at the School of Critical Studies at the University of Glasgow, UK, analyzes some famous and lesser-known figures of the Enlightenment. He takes a closer look at their interpretations of the Christian faith, retraces their lines of reasoning, and compares their positions. These thinkers concerned themselves with Jesus, not for personal reasons, but to promote their vision of history, morality, and political theology.

Chapter 1 serves as an introduction, where Birch clarifies his subject matter, outlines the current state of research, and lists his working definitions. In addition, he explains the organization of his thorough study while also presenting his four main theses. First, in the Age of Enlightenment, one can identify prototypes of theological discourse with a focus on Jesus, which still today subsist in various forms. Second, the “religious Enlightenment,” actually, grew out of paradigms of scholastic and post-Reformation theology, which frequently stressed a theological-moral realism. Third, as the thinkers’ metaphysical convictions differed, so did their sociocultural visions of how the Enlightenment was to be implemented and lived out in society. Finally, the Enlightenment in general tended toward religious heresy and influenced our modern societies immensely (p. 24).

Because the Enlightenment is not as clearly defined as it seems, the author discusses in chapter 2 various conceptions of this key term. He also examines the philosophical, political, and religious context, which in turn brings him to describe the Enlightenment as “a more or less interconnected set of intellectual and social movements in the seventeenth and eighteenth centuries with identifiable reforming (or revolutionary) concerns, and ‘enlightenment’ as an ideal, aspiration, or ethos, which might be said to underlay those different projects” (p. 42).

Following relevant philosophical paths (e.g., Plato, Marcion, Thomas Aquinas, medieval scholasticism, Erasmus, Spinoza, and the anglophone Deists), chapter 3 shows how four key factors favored heterodoxy: a rationalistic vision of the goodness of God, the priority of the natural law as divine law, the supposed moral capacity of humans, and the ethical example of Jesus. Thus, the cultural elites generally accepted and presumed “that moral development was at the heart of the Christian life” (p. 124).

Chapter 4 focuses on Thomas Hobbes as a transitional figure of his time. Because he promoted a materialist monism, his emphasis on the immanent world strongly shaped his view of the Christian faith and personal and political ethics. In chapter 5, Birch analyzes the work and thought of three representative dualists, who stood in contrast to Hobbes on many levels: the Quaker James Nayler, the Christian rationalist Henry More, and the radical positivist historian Hermann S. Reimarus.

Regarding religious tolerance, chapter 6 compares the paradigms of Spinoza, Locke, and Pierre Bayle. Because they differed in their views on revelation, in their theological arguments and worldview, they spoke out differently on the relationship between state and Church. Still, “all thought it necessary to go back to the roots of Christianity in order to address the religio-political challenges of their present” (p. 292).

Shifting to the North American context, Birch turns the readers’ attention in chapter 7 to Joseph Priestley and Thomas Jefferson, who built on materialist metaphysics and repudiated orthodox Christianity. The former was practically a Unitarian who saw the use of Christianity in its facilitation of humanity’s progress. The latter, in turn, elaborated a minimalist version of a historical Jesus, who could serve as “a symbol of moral and spiritual unity” (p. 352) for the nation.

Finally, chapter 8 concludes the book by bringing together the various themes and positions. Birch explains that public intellectuals of the seventeenth and eighteenth century demonstrated an eclectic attitude towards the Christian faith. They all embraced and advanced various heresies, but none of them was an atheist in a strict sense. In order “to imagine a brighter spiritual, moral, and political future” (p. 374), they criticized or used the Christian tradition according to their presuppositions. Therefore, the Enlightenment is not to be understood as a monolithic era. Rather it is a set of interwoven narratives, which contributed to “the pluriform origin of liberal modernity” (p. 374), and whose effects we witness still today. The book closes with an extensive bibliography and both a helpful author index and a subject index.

Using intellectual history as his fundamental approach, Birch manages to present a multi-layered study on an unusual, exciting topic. Not only does he interact actively with secondary literature, but he also models how to grapple with the history of ideas methodically. Although the author works with a rather functional, context-bound understanding of heresy, he treats the various intellectuals fair-mindedly and in light of the zeitgeist. Hence, Jesus in an Age of Enlightenment connects several dots and presents a nuanced picture of the Enlightenment. Readers who prefer a more linear approach to history will have some difficulty following Birch in his extensive analyses, which regularly go beyond the abovementioned thinkers. Occasionally, the author also expresses theological or personal judgments, which evangelical scholars will see differently for good reasons. However, ultimately Birch makes an important contribution within the field of Enlightenment studies. Scholars and students of history, cultural studies, and apologetics will find many stimulating perspectives in this volume worth reading.