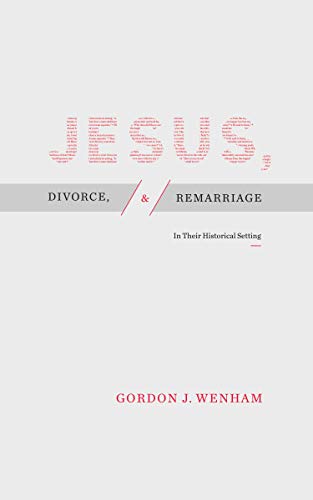 Jesus, Divorce, and Remarriage: In Their Historical Setting

For forty years Gordon Wenham has challenged the evangelical consensus concerning Jesus’s teaching on divorce and remarriage. He concluded already in 1984 that while divorce without remarriage is permitted in the face of immorality, remarriage is prohibited (see “Matthew and Divorce: An Old Crux Revisited.” JSNT 7 [1984]: 95–107). This slim and accessible volume continues this work.

The first third of Jesus, Divorce, and Remarriage, chapters 1–3, places Jesus’s teaching in its historical setting by introducing marriage practices in the ancient Near East, the OT, and later Jewish writings such as the Dead Sea Scrolls (in particular the Damascus Document and the Temple Scroll), Mishnah (c. 200), and Talmud (c. 500). Where modern western marriages involve choices made by a couple, in the ancient world parents of often young children arranged marriages in order to unite families. Marriage was thus about community rather than individuals, meaning divorce had social implications. Further, marriage often involved a dowry, meaning divorce could also have financial repercussions. The Mishnah and Talmud are directly relevant: in recounting the views of Hillel and Shammai they illuminate the Pharisaic schools of Jesus’s day.

The next third, chapters 4–6, explores Jesus’s teaching on divorce and remarriage in Matthew. Wenham sidesteps source-critical issues by reading the passages in their final form and canonical order—as they have been read historically. He begins with Matthew 1:18–25 and Joseph’s intention to divorce Mary prior to their marriage. To be engaged involved an “inchoate marriage” (p. 10) that transferred a woman from her parents’ to her husband’s authority as they awaited the wedding. This discussion reveals cultural and theological values, ultimately showing “how the exception clause in the other passages is supposed to function” (p. 49). In the face of sexual infidelity, the offended partner was practically required to initiate divorce.

Chapter 5 attends to Matthew 5:31–32. Jesus redefines adultery, teaching that divorce where there has been no sexual impurity is adulterous, as is marrying a divorced woman. Since the certificate of divorce explicitly states the recipient’s freedom to marry any man, Jesus is opposing the validity of the certificate, and with it the notion that divorce dissolves the marriage. Only if marital unions survive divorce would remarriage be adulterous. Thus, the marriage bond is unbreakable, rendering a second marriage bigamous. Jesus’s statement restricts the husband in two ways: it eliminates “any cause” divorce, and it teaches that men can be guilty of adultery against their wives. Before this, adultery was considered a crime against another man.

In chapter 6, Wenham investigates Jesus’s response in Matthew 19 to Pharisees who challenge him concerning the scope of permissible divorce. Again, Jesus insists that remarriage after divorce is in effect adultery, reiterating the notion of indissoluble marriage. He is being asked to adjudicate the Hillelite and Shammaite positions on divorce and remarriage. His answer indicts both sides, granting only divorce as separation, not as an entryway to remarriage. The subsequent exchange with his disciples speaks of divorcees as “eunuchs” who may or may not have chosen their status but are now called to live single lives, as he himself did, for the sake of the kingdom.

The final third of the book, chapters 7–9, picks up material after Matthew. Chapter 7 briefly considers parallel passages in Mark and Luke, both of which famously lack the exception clause. Wenham nevertheless concludes that the Gospels are in agreement because Mark also equates remarriage with adultery.

Chapter 8, only four pages, discusses Paul’s teaching, primarily 1 Corinthians 7, where (in vv. 10–11) Paul summarizes Jesus’s teaching—sharing Jesus’s explicit prohibition of remarriage but differing in starting with action initiated by the wife. Like Jesus, Paul requires the divorced person to remain single. Moving on to the Corinthians’ question—What should a believer do if married to an unbeliever?—Paul instructs them to stay married. Thus ends Paul’s teaching on divorce.

Finally, chapter 9 surveys the early church fathers on remarriage, observing that (1) the Reformers immersed themselves in the writings of these fathers, so we neglect them to our detriment, and (2) the fathers consistently opposed remarriage—teaching at times that even widows shouldn’t remarry.

The strengths of Jesus, Divorce, and Remarriage are many. It covers much ground, engaging with a range of important issues with humility and sensitivity. It exposes many of the exegetical challenges confronting the thoughtful Christian—no matter one’s position. As such, it should be required reading for those who want to think carefully about divorce and remarriage.

Some limitations are noteworthy, however. This book is simply too short, with too broad a coverage, to defend Wenham’s conclusions. Sometimes positions held tentatively in the body of a chapter become more certain in subsequent discussion. Occasionally it feels like scholarship has been chosen because it endorses a position, not because it presents a strong argument. More often an argument isn’t extended to its logical conclusion: for example, while Wenham argues that we, like the Reformers, should attend to the church fathers, he overlooks Luther, Calvin, Bucer, and Knox’s disagreement with those fathers who opposed remarriage after valid divorce.

Many maintain that divorce is adulterous because it assumes remarriage. Wenham instead argues that divorce apart from πορνεία is itself inherently adulterous; thus, Jesus has expanded adultery to include non-πορνεία divorces and all remarriage after divorce. But both Matthew 5:32 and 19:9 introduce a step between divorce and adultery. In 5:32, divorce apart from immorality causes adultery, which is not to say that it is adultery. In 19:9, the remarriage generates adultery. This raises the question of the exception. In Wenham’s reading, it would appear that “whoever divorces his wife except for πορνεία and marries another commits adultery” equals “whoever divorces his wife and marries another commits adultery.”

In fact, this equality becomes explicit in relating Matthew to the exceptionless statement in Mark: “As both Jewish and Roman law required adulteresses to be divorced, there was no real difference from Matthew, since Mark brands remarriage as adultery” (p. 90). This highly compressed assertion might mean that because Matthew’s Jewish readers were required to divorce adulterous wives, one is not morally culpable when putting away, without remarriage, such a woman; and similarly, though Mark doesn’t include the πορνεία exception while addressing non-Jews, he too knows divorce was compulsory and therefore the husband was not guilty before remarriage. We should note, however, that in trying to solve a difficult problem Wenham (1) inserts “adulteresses” where Jesus’s exception speaks of πορνεία, (2) converts what was for Jesus a moral issue into a legal one, and (3) makes questionable assumptions about Roman law. Few inhabitants of the empire could divorce an adulterous “wife” because legal marriage was reserved for Roman citizens. Further, to assume divorce was required for adultery stops short: Augustan law required legally divorced women to remarry. So does the Markan Jesus assume non-Jews—generally unmarried in Roman law—are required by Rome to divorce? Does Jesus command divorcees, against Roman law, to remain unmarried? It is difficult to see how the supposed legal requirement to divorce an adulterous wife helps reconcile Matthew and Mark’s accounts.

Further, according to Wenham, remarriage is bigamy and bigamy is adultery. But why then does Jesus speak of adultery rather than πορνεία or bigamy? The law prescribes no penalty for bigamy but death for adultery. The distinction matters, even if both are unacceptable.

Jesus, Divorce, and Remarriage effectively exposes some of the challenges in interpreting difficult passages. The reading is always worthwhile even if conclusions are not always convincing.