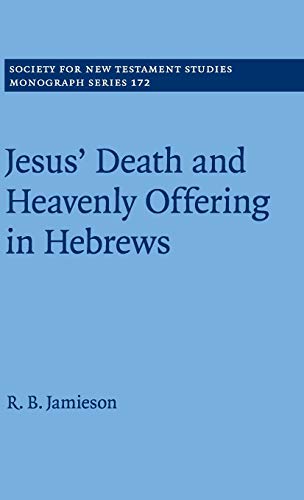 R. B. Jamieson, associate pastor at Capitol Hill Baptist Church in Washington DC, offers us a penetrating look at Christ’s work in the book of Hebrews with this “very light revision” of his Cambridge PhD thesis (p. ix).

Jamieson divides the book into two parts. The first section is an attempt to answer what he describes as a formal question: “when and where does Jesus offer himself?” (p. 1). His answer is that “Jesus offers himself to God in the Holy of Holies of the tabernacle in heaven, after his bodily resurrection and ascension.” The second section is an attempt to answer a “twofold material” question, namely, “What role does Jesus’ death play in Hebrews’ soteriology as a whole, and specifically within Jesus’ high-priestly self-offering?” (p. 1). Put simply, the author’s answer to this material question is this: “what Jesus’ death achieved is in fact what he gives to God in heaven” (p. 2).

As one might expect with a monograph on Hebrews, Jamieson is building on the ground-breaking work of David Moffitt’s 2011 monograph entitled Atonement and the Logic of the Resurrection in the Epistle to the Hebrews (Leiden: Brill). Yet, he is careful to clarify that he is not merely responding to Moffitt’s exposition; rather, Jamieson engages “directly with the full range of scholarship” on the aforementioned formal question (p. 2). In addition, while advocating for Christ’s “heavenly self-offering,” he sets himself apart from advocates of the same by providing “an account of the relationship between Jesus’ death and heavenly offering” (p. 3).

The introduction offers a five-view taxonomy of the formal question, with the first view that Jesus’s self-offering takes place at the crucifixion and the fifth view that “Jesus offers himself in the heavenly sanctuary, after his resurrection” forming the two ends of the interpretive spectrum (p. 11). For advocates of the fifth view, such as Jamieson, “the need to reassess Jesus’ death in light of his heavenly offering” becomes obvious given the assertion by some of its advocates that “Jesus’ death is not atoning” (p. 15). This then is the burden of part 2 of his monograph.

Some highlights will suffice to illustrate the main contours of Jamieson’s argument. Drawing on Hebrews 2:10–14, 17; 5:5–10; and 7:28, he argues that these passages teach that Jesus’s perfection follows after his earthly suffering and death. This perfection, in context, occurred at his resurrection (cf. 7:16, 23–25; 8:4). Taking these together, he asserts that Christ’s perfection is the prerequisite for his high priestly appointment.

Building on this, Jamieson walks the reader through Hebrews 9:24–25; 8:1–5; and 9:11–14; he treats these passages in light of the author’s interpretation of Yom Kippur (Lev 16), an interpretation that Jamieson argues “is employing the logic of the whole rite” (p. 47). These three passages of Hebrews, together with Leviticus 16, teach that Christ offered himself in the heavenly sanctuary typified by the Holy of Holies of the earthly sanctuary. Since Christ’s resurrection, which made perfect his suffering and death, is the basis for his high priestly appointment and Christ’s offering of himself takes place in heaven, then it follows that the timing of Christ’s appointment as high priest in order to make this offering was coincident with his exaltation and could not have occurred before, according to Jamieson’s reading of Hebrews.

Moving to the material question (i.e., the role of Christ’s death), Jamieson recognizes that an overreliance on the “Levitical framework” (p. 98) of Hebrews has caused some interpreters to deny that Christ’s death effects atonement. Giving attention to three passage—Hebrews 2:9, 2:14–15; and 9:15–17—while employing plight and solution as a heuristic device, he argues that Hebrews employs “other conceptual resources” to expound Christ’s death. Thus, for example, Hebrews 2:9 teaches that “by dying Jesus averts death” (p. 109) and Hebrews 2:14–15 teaches that “by dying on the cross, Christ achieved the decisive eschatological victory over Satan” (p. 114).

Chapter 5 explores three connections as the author focuses on the material question as it relates to “Hebrews’ Christological appropriation of the Levitical cult” (p. 127), namely (1) death and blood, (2) blood and offering, and (3) death and offering. After working through these connections, especially noting the close connection between death and blood seen in the allusion to Leviticus 17:11 in Hebrews 9:22b and 13:20, he writes, “Jesus’ death on the cross is not where and when he offers himself, but it is what he offers.… He gives to God the life he gave in death for his people’s forgiveness” (p. 178). As a consequence, while Jamieson agrees with view five of the taxonomy noted above with regard to the when and where of Christ’s offering, he agrees in large part with view one as understands “blood” to be “a metonym for Christ’s death” (p. 178). In sum, Christ as high priest offers himself as the substitutionary sacrifice “to God in heaven” (p. 182).

This is a superb and indeed invaluable contribution to scholarship in the book of Hebrews. Jamieson’s detailed exegesis of Hebrews and its OT backgrounds offers a compelling account of Christ’s work in the epistle and as such ought to be consulted by the student who wishes to have a clear grasp of Christ’s death and priestly work, the pastor interested in teaching the same, and the scholar doing work in Hebrews or NT theology more broadly. This monograph is highly recommended.