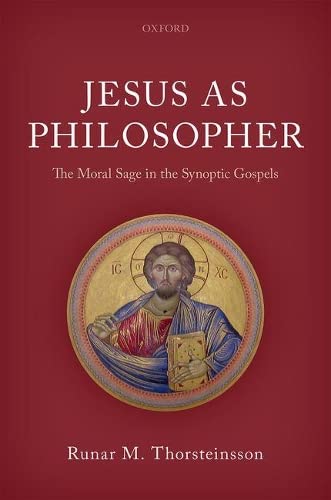 Jesus as Philosopher: The Moral Sage in the Synoptic Gospels

Jesus as Philosopher is a short book with the ambitious aim of tracing the influence on the Synoptic Gospels of philosophical traditions contemporary to Jesus. Thorsteinsson. Professor of New Testament at the University of Iceland, is well known for his earlier work Roman Christianity and Roman Stoicism (Oxford: Oxford University Press, 2010), reviewed in Themelios 36. In Jesus as Philosopher, Thorsteinsson probes two key questions: (1) How do the gospel writers speak of Jesus in relation to contemporary philosophy? (2) Does Jesus take on a philosophical role and are Jesus’s words and actions analogous to or different from leading Greco-Roman philosophical figures?

Thorsteinsson sets out his purpose and approach in an introduction which claims this is an area with limited literature. He cites Luke Timothy Johnson’s essay in Jesus and Philosophy: New Essays, ed. P. K. Moser (Cambridge: Cambridge University Press, 2009) as well as the work of F. Gerald Downing and Hans Dieter Betz on the Cynics and Meier on the historical Jesus. He follows Morgan in asserting that philosophical doctrine and popular ethics were closer that previously assumed. Thorsteinsson is inspired by narrative criticism and seeks to work within a framework of ancient virtue ethics. He comments on ideal moral character in wisdom literature, but there is no consideration of the beatitudes.

Chapter 1 explores philosophy as a way of life, noting the wider social reach of Epicurean and later Stoic philosophical schools compared with Aristotelean and Platonic exclusivity. Thorsteinsson then defines the philosophical sage as sociable wise man with knowledge of ethical truth and related to the motif of a “divine-man” (p. 26), drawing on examples from Socrates, Diogenes, Epicurus, and Seneca.

Chapter 3 on Matthew briefly recapitulates the themes of asceticism, family, and possessions before focussing in more depth on ethics. Perfection, the golden rule, love for enemies, forgiveness, and prayer are found in Stoic ethics but Jesus differs in his emphasis on humility and child-like dependency. Philosophers share Jesus’s sharp critique of hypocrisy (Matt 23:4–7), similarly using digestion (15:11, 17–20) as an analogy to express how sincere theoretical words should match practical action (Epictetus, Dissertationes, 3.21.1–3). Wisdom too is compared to a firm foundation. Distinctions between Jesus and the philosopher sage in emotions are less pronounced in Matthew than in Mark. Thorsteinsson is content to draw parallels on suffering and death rather than assert the influence of philosophical traditions on the Gospels.

Thorsteinsson concludes that “the Gospel authors drew on Graeco-Roman traditions in addition to Jewish traditions, … modelling … Jesus as a philosopher” and “superior to them” (p. 184). While the parallels he identifies provide evidence of a multi-cultural background they are insufficient to show that a philosophical sage model for Jesus is consciously being used by the gospel writers. A Stoic model in particular faces several challenges (for example, Thomas E. Phillips [“Was Jesus a Bad Stoic?,” SBL Forum, November 2004, http://sbl-site.org/Article.aspx?ArticleID=334] contrasts the Stoicism of 4 Maccabees with accusations of gluttony and drunkenness [Matt 11:16–19/Luke 7:31–35] and Jesus’s cry of dereliction [Mark 15:34/Matt 27:46]). Although Thorsteinsson is aiming to fill a gap by examining philosophy in the Synoptic Gospels, an exploration of John’s Gospel and especially the use of λόγος is important for evaluating such a model thoroughly (for example Troels Engberg-Pedersen, John and Philosophy: A New Reading of the Fourth Gospel [Oxford: Oxford University Press, 2017]). Previous treatments have tended to focus on Paul and Luke (for example, Troels Engberg-Pedersen, Paul and the Stoics [Edinburgh: T&T Clark, 2000], reviewed in Themelios 27; and C. Kavin Rowe, One True Life: The Stoics and Early Christians as Rival Traditions [New Haven: Yale University Press, 2016], reviewed in Themelios 41, as well as Thorsteinsson’s own writings).

Thorsteinsson’s approach is repetitious and he often points out differences between the Synoptics without attempt at harmonization or justification for the redaction and source critical comments he makes. However, his examples demonstrate that sensitivity to the Hellenization of the Jewish context of the Gospels would enrich interpretation. This book contributes to a deeper understanding of the background philosophical and intellectual climate of the first century.