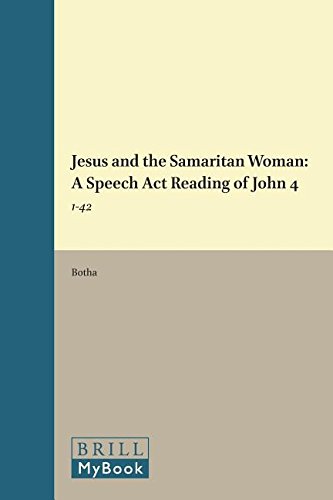 Jesus and the Samaritan Woman: A Speech-Act Reading of John 4:1–42 (Supplements to Novum Testamentum LXV)

Originally submitted in 1989 as a doctoral thesis at the University of South Africa, this study of John focuses on chapter 4 of the gospel, but does so with a specific aim in mind. Its avowed aim is to discover something of the style of the work and extrapolate from that to ‘speech-act’ reading of the gospel as a whole. Thus, it comes to the material from something of a novel angle, applying modern stylistics and recent developments of communication theory to the text. Indeed, a substantial portion of the book serves as an introduction to the approach: Chapter Two is entitled ‘What is Style?’ and Chapter Three defines ‘speech-act theory’ as it applies to John 4:1–42. Unless you are very up-to-date on linguistic theory, these two chapters are essential to the readability of the book, for they gently guide the uninitiated through what is (for many) largely uncharted water. In short, the author contends that for too long ‘style’ has been understood to mean ‘grammatical style’ and he seeks to offer a new approach which takes into account the recent developments in narrative criticism and reception theory and to use them as tools to engage the literary text. Essentially, Botha contends that the ‘speech act’ deals with utterances and their meaning, rather than sentences as such (which are more the subject of formal grammatical analysis).

Chapter One offers an interesting survey of how past studies of John’s style have been undertaken by NT scholars, more often than not as a means to support some other critical point, such as source-critical analyses, redactional studies, or questions of the relationship of the gospel to the rest of the Johannine corpus. Most major commentaries (up to the late 1980s) are included in this discussion and there is a good interaction with German scholarly efforts in particular. In Chapter Three we are helpfully made to realize the importance of distinguishing between the levels of communication between the characters in the story of John 4, and the levels of communication between the (implied) narrator/author and ourselves as the (implied) readers of the story (reliance upon R.A. Culpepper’s work is in evidence here). Throughout this section, Botha is emphasizing that the Gospel of John must be approached as a literary text, but one which has a specific religious purpose in mind, a purpose which we as readers must attempt to grasp.

The heart of the book comes in Chapter Four, where the ‘Speech-Act Reading of John 4’ is undertaken. In fact, it is really only at this point, halfway through the book, that the Gospel of John is engaged in any substantial way; everything that has gone before is preparation. Yet at this point, something of an inconsistency slips into the basic premise of the book. Botha has been suggesting that he is trying ‘to deal with the communication of the Gospel text as a whole’ (p. 59), so it seems strange that he limits his study to a single chapter. To be fair, he recognizes this problem, stating that practical reasons (such as limits on monograph length?) dictate the smaller focus; but I cannot help but wonder if the validity of the project is called into question as a result of this. John 4 is divided into six coherent units: 4:1–4; 5–7a; 7b–26; 27–30; 31–38 and 39–42. Each unit is treated in turn and analysed according to the speech-act theory, with a view to providing new insight into the text. A short summary follows each section. It is here that the most directly relevant material is found for the reader interested in how the approach can help him or her understand the meaning of the biblical text better. Some surprising observations emerge, which shed light on some of the perplexing features of the text itself. To cite but one example: What does Jesus intend by 4:24a, ‘God is Spirit’? What is meant by this enigmatic statement? Botha links it to the statement in 4:23 and comments: ‘In asserting something about the nature of God, Jesus wants to convince the woman that his interpretation in 4:23 is logical and correct. The locutionary force is also intended to get the readers to accept this’ (p. 158).

The volume does use a considerable amount of Greek within its discussion (notably in Chapter Four) and may be difficult to follow for those not fairly proficient in the language. At times I found the writing style laborious and repetitive, with unnecessary cross-referencing between chapters and an all-too-frequent assertion by the author that ‘what I am doing here has never been done before!’. Despite the fact that it offers a fresh and different angle to Johannine studies, it is not an easy book to read, mainly because it spends so little time actually discussing the biblical text itself. The volume will probably be best appreciated by students researching in linguistic theory rather than for any fresh light it sheds on John 4:1–42, although those concentrating on that chapter will want to read the relevant section of this book. A full bibliography and index are included.