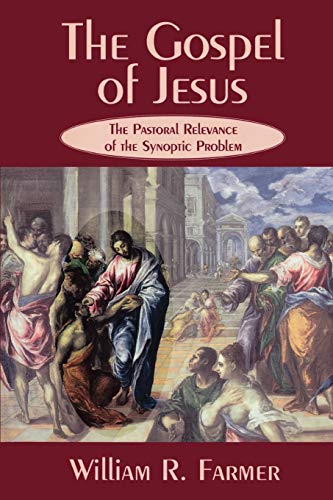 Jesus and the Gospel

Since the publication of his book, The Synoptic Problem, in 1976, William Farmer has been identified as a leading defender of Matthean priority, against the overwhelming tide of critical opinion that Mark was the first gospel to be written. And though this present book is also an elaborated and sustained defence of his view of the priority of Matthew, it goes much beyond the first book. In Jesus and the Gospel Farmer attempts to present the larger picture of the rise, not only of the gospels, but of the entire corpus of early Christian books, and how, from that corpus, the final form of the canon came to be. Thus, in sum, the book consists of his creative argumentation to spell out a viable and historically defensible scenario in which there was a need for a gospel such as Matthew (and that the need was first of all for Matthew); but, from there, how the remainder of the books of the New Testament arose; and finally, what were the forces at work in the first three centuries that caused the church to settle upon the canon that it did.

The reader will immediately realize that Farmer’s work is based on thorough-going form critical presuppositions. Farmer accepts that the order of events in the gospels is not based on the actual historical order of those events, but rather derives from the various purposes of the Evangelists. As well, the gospels include not only traditions coming from Jesus and his associates, ‘but also many which reflect the needs of later Christian communities’ (p. 22). Likewise Farmer accepts F. C. Baur’s basic conclusion that the Acts record cannot be viewed as a historical account of the beginnings of the Christian church (pp. 50f.). So, though on one hand Farmer goes against the tide of critical opinion in opting for the priority of Matthew, he does so strictly on critical grounds, operating on the basis of the radical presuppositions of current form and redaction criticism.

The book consists of an introduction and three parts. In the introduction Fanner details what he sees as the inadequacies of the two document hypothesis of the origins of the synoptic gospels, and he pronounces it thoroughly discredited and impossible. As to why reputable and competent scholars continue to adhere to such an impossible position Fanner answers: ‘this hypothesis appears to be incapable of being falsified because of its infinite capacity for modification’ (p. 10).

In part one of the book Farmer endeavours to show how the gospel tradition arose around the historical figure of Jesus. As with much of the book, this section contains a wealth of careful and illuminating discussion as he pieces together some of the valuable fruits of the historical-critical disciplines. He includes a helpful analysis of the kind of person Jesus was, giving much recognition to the presence of authentic Jesus sayings in the gospels. As well, he rightly stresses that we not miss the essential continuity between the pre-Easter fellowship between Jesus and his disciples, and the post-Easter Christian community. Farmer extends this to stressing the continuity between the theology of Jesus and Paul, a refreshing stance when one is used to seeing many scholars emphasize only the differences between Jesus and Paul as if the post-Easter Christian church took no more than its name from the risen Christ. But, as a form critic, Farmer believes that the developing Jesus tradition consisted of more than the ‘remembered’ sayings of Jesus. ‘By the time the Gospels were written, the Jesus tradition itself had developed significantly through modification of the words of Jesus and the creation of quite new words’ (p. 64). Part one ends with Farmer’s description of how the Jesus tradition was modified and how new forms were created to meet the needs of the developing church: through the work of Christian prophets, scribes, the chreiai (pointed sayings of Jesus that are modified in preaching), legends and myths (e.g., the stories of the transfiguration and Peter’s walking on the water; it would be a mistake, Farmer believes, to see these as having actually occurred in the life of the historical Jesus).

Part 2 consists of Farmer’s analysis of how this Jesus tradition developed into what we now know as the gospel genre. He defends in detail his position of Matthean priority, citing both external evidence and literary analyses of the gospels themselves—both his own analysis and extensive arguments set forth by Pierson Parker (from The Gospel Before Mark [University of Chicago, 1953]. Note that Parker remains convinced of this position though it is not identical to Farmer’s; see ‘A Second Look at The Gospel Before Mark’, JBL, 100/3 [1981], pp. 389–413.). It must be admitted that Farmer is able to marshal convincing quotes from, e.g., the early Fathers (note, though, that he does not equally accept the verdict of the Fathers as to the authorship of the gospels, finding the typical form critical ways of ‘explaining away’ the Fathers’ express statements of apostolic authorship), and manages to construct a coherent scenario of how the gospels might have developed, given the political and religious dynamics of the first century. But, though it may appear consistent, one is still left unconvinced that Farmer’s explanation is really the correct one. To arrive at his scenario, Farmer is forced to wriggle out of some data. Thus, after noting the strong tradition (of Papias, Irenaeus, Clement, and Origen) that Mark was associated with Peter and derives his gospel from that apostolic source, Farmer concludes that this really means that Mark’s Gospel was viewed by the early church ‘as being in close relationship to the apostolic authority of Peter’ (p. 172). With this alteration, Farmer is able to date Mark later, certainly post-ad 70. Otherwise the face-value testimony of the Fathers would prove embarrassing.

Finally, in part 3 Farmer discusses how the tradition concerning Jesus came to be enshrined in the New Testament. His answer is that the final canon of the New Testament consisted of those books that ‘helped the church remain faithful to its Lord in times of crisis. It helped the church pass through the fiery ordeal of imperial persecution and check the debilitating internal spread of Gnostic influence’ (p. 226). This is a fascinating section in which Farmer discusses the many factors at work in the formation of the canon and, in the process, derives various criteria for adoption as Scripture by the church. The factors include: whether or not a book was believed to be written by an apostle (pp. 198ff.); whether a book could be used to refute heresy or was used to promote heresy (p. 205); whether or not a book spoke of the life of martyrdom and encouraged Christians experiencing martyrdom (as well, in the face of persection, it became of paramount importance to decide which books were worth dying for) (p. 206); and which books made clear the apostolic role in taking the gospel to the Gentiles. As these factors worked themselves out in the course of the first centuries there came a gradual sifting out of the inadequate or objectionable books so that ‘by the time of Eusebius it could probably be said with a great deal of justification: these are the books that are accepted in the great church everywhere’ (p. 259).

Can Farmer’s book be accepted everywhere? Probably not, for most will still be unconvinced that he has successfully dethroned the majority position that Mark’s Gospel was the first written, and prior to ad 70 at that. Likewise, evangelicals will be uncomfortable with the anti-historical presuppositions that undergird Farmer’s approach, not to mention Farmer’s views of the place and nature of legends and myths in the Jesus traditions. On the other hand, Farmer gives much that is worthy of consideration as he attempts to work out a full-fledged scenario of the development of the canon, all the way from the historical Jesus to the final twenty-seven books. Not all will be convinced, for much of the scenario must be based upon informed speculation. But all in all, Jesus and the Gospel is a book that is worth reading—it will give the student of the gospels an excellent introduction to the work of a modern form critic, and one who is willing to go against the tide of scholarly opinion at that. But for one who is looking for the likely ‘solution’ to the synoptic, problem, (s)he will probably have to look elsewhere.