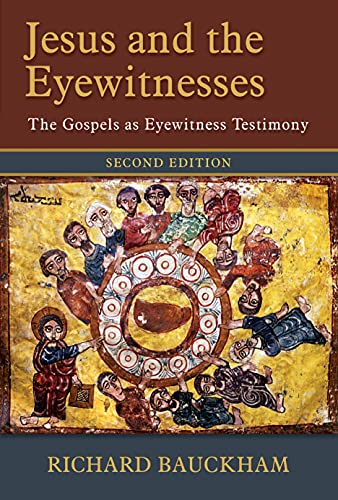 JESUS AND THE EYEWITNESSES: THE GOSPELS AS EYEWITNESS TESTIMONY

Richard Bauckham, the retiring Professor of New Testament at St Andrews University in Scotland, is one of the best-informed and most original New Testament scholars of this generation. In this remarkable book, Bauckham’s thesis is that the gospels should be understood as ‘testimony’ (as argued before by Samuel Byrskog), testimony being ‘a reputable historiographic category for reading the Gospels as history’ and also a theological category that is appropriate if we are to ‘recognize the disclosure of God in the history of Jesus’. In testimony there is no gap between the events described and the interpretation given: ‘there is an inextricable coinherence of observable event and perceptible meaning’ (5).

As for the nature of the New Testament’s testimony to Jesus, Bauckham seeks ‘to present evidence, much of it not hitherto noticed at all, that makes the ‘personal link of the Jesus tradition with particular tridents’, through the period of the transmission of the tradition down to the writing of the Gospels, if not ‘historically undeniable’, then at least historically very probable’ (7). What this means in practice is that Bauckham argues for an extremely close link between Peter and Mark’s gospel, and also that John’s gospel was written by a disciple of Jesus. Bauckham recognizes that John is a more meditative interpreted account of Jesus than that found in the synoptics, but instead of seeing this as evidence of greater remoteness from Jesus, he sees it as precisely the freedom that an eyewitness would have had in giving his testimony to Jesus.

Much of Bauckham’s book comprises detailed and interesting analysis of the early church traditions regarding the origins of the gospels. Whereas many scholars seem (almost) to bin the comments of the early church fathers, Bauckham takes them very seriously. Thus his first major chapter is on his key witness, Papias. He discusses Papias’s preference for ‘the living voice’ rather than for books, and argues that this reflects not a general preference for oral over written tradition, but the belief, which was widespread in the ancient world, that priority in writing history should be given to the testimony of eyewitnesses, preferably living eyewitnesses.

He goes on to a fascinating discussion of ‘names’ in the gospels, arguing that the pattern of people named (and not named) reflects accurate recollection of the people concerned (e.g. the women at the cross, Simon of Cyrene and his two sons), and that some of the stories (e.g. that of Zacchaeus or Bartimaeus) must have come from the individuals concerned. He brings into this discussion some of the recent research that has been done on Jewish names in the NT period (as by the Israeli scholar Tal Ilan), finding that the gospel names fit strikingly well. Bauckham’s table of ‘the 99 most popular names among Palestinian Jews’ is slightly reminiscent of modern newspaper statistics on the most popular names for babies!

Bauckham moves from this into a chapter on the twelve, arguing that they not only have theological significance in relation to Israel, but also that they were ‘an official body of eyewitnesses’. He explores differences in the various lists of names in Scripture, making lots of sense of the differences and finding the accounts compatible (with the one exception being the changing of Levi in Mark 2:14 to Matthew in Matthew 9:9, which he sees as the author of Matthew’s gospel wanting to associate Matthew as the author of the original Aramaic Matthew with the first disciples). Bauckham goes on to argue that Mark by introducing Peter at the beginning and the end of his gospel, and also Luke and John in different ways, are using a literary device ‘the inclusio of eyewitness testimony’ (found also in Lucian and Porphyry); they are thus claiming to have eyewitness sources.

This leads Bauckham back into Mark and to his argument that Mark’s narrative and portrayal of Peter indicate that his gospel derives from Peter. He revives the view of C. H. Turner that Mark’s alternation between the third person plural (e.g. Mark 14:32 ‘they went to … Gethsemane’) and the third person singular (‘and he said to his disciples’) is an echo of Peter’s first hand narrative (‘we did … Jesus did’). Bauckham argues that Peter comes over as an individual, not just as a representative figure, and that Peter is honestly, but not negatively, portrayed, as someone who experienced transformation.

Having argued about the significance of named individuals in the gospels, Bauckham also reflects about anonymous individuals, suggesting, for example, that ‘protective anonymity’ may have been a factor in the failure of Mark to name the woman who anointed Jesus, the young man who fled away naked (was he Lazarus, who was a marked man?) and the man whose ear was cut off.

Bauckham then comes back to Papias and to his testimony about Mark and Matthew, arguing that Papias means to say that Mark was Peter’s translator (not just someone who drew on Peter’s preaching to compile his own account). Papias’s comment that Mark did not compile his account in order derives from his comparison of Mark with John’s gospel, which he regarded as an orderly first-hand eyewitness account. Our Matthew was one translation of the original Aramaic account of Matthew.

Bauckham next moves into a general discussion of oral tradition and memorization, looking at scholarly ideas about oral tradition, making trenchant criticisms of form criticism, and then offering a more sympathetic critique of the ideas of the Scandinavian school and Birger Grhardsson and also of Kenneth Bailey and James Dunn. He argues that Bailey and Dunn, for all their strengths, fail to take into account the important community role of official eyewitnesses. He notes the importance of oral tradition for Paul and picks up the arguments of Stanton and Lemcio about the gospel writers distinguishing Jesus’ time from their own time, not confusing the two. He notes the importance of memorization in ancient society, drawing on Riesner’s work on Jesus as teacher, while allowing that written note-taking may have played a part. He questions the idea that traditions were preserved by communities, rather than by individuals, and also the idea that the gospels were originally anonymous: at least Luke in his prologue and John with his references to the Beloved Disciple assume that the readers know who the authors are.

In case the reader is getting tired of examining all sorts of ancient sources, Bauckham moves next into a interesting chapter on modern studies of the psychology of memory, bringing this finally to bear on the form critical ideas of Nineham and others, and arguing that the gospels do represent genuine memories of Jesus.

Most of the final hundred pages of Bauckham’s book are devoted to discussion of John’s gospel. He argues, among other things, that chapter 21 is an integral part of the gospel (an epilogue of 496 words matching the prologue of 496 syllables; 496 was a triangular and perfect number, and the numerical value of monogenes, only Son, in 1:14!). He argues against the view that the ‘we’ of 21:24 points to the gospel coming from a Johannine school; rather it is a ‘we’ of authoritative testimony. He goes on to interact with other scholarly ideas about John’s gospel, for example arguing persuasively that there is not rivalry between Peter and John, but that Peter is the pastor and John the witness, with 21:23 pointing to John’s testimony as continuing until the parousia.

He returns to Papias for discussion of the identity of the author of the gospel and sides with the not inconsiderable body of scholars who think that Papias distinguishes two Johns: the son of Zebedee and the elder. The Beloved Disciple is the latter and was an original disciple of Jesus, but not one of the twelve. He backs this argument up with study of the Muratorian canon and Polycrates and Irenaeus, making all sorts of intriguing suggestions, including that the tradition that John was a priest, indeed a high priest, existed because the Ephesian church identified him (wrongly) with the John of Acts 4:6.

So Bauckham’s case is complete, except for some final comments on historical method and testimony, in which he affirms the proper place for trusting testimony, though not credulity. He offers some very interesting comparisons between testimonies to the horrors of the Holocaust and the testimony of the gospels to the good news of Jesus, in both cases ‘uniquely unique events’, to quote Ricoeur. He concludes by coming back to the theological point that testimony is the appropriate category for describing events that are a disclosure of God in history. ‘It is in the Jesus of testimony that history and theology meet’ (508).

This book is very important, calling into question many conventional scholarly opinions and offering many fascinating and largely persuasive observations. Sometimes the judgments are fine ones, involving attractive but uncertain readings of texts, biblical and patristic. (His work on Papias and others reminded me a little of my father, John Wenham, and his Redating Matthew, Mark and Luke.) My major question about the book relate to Bauckham’s view of the authorship of John’s gospel, though he is in very distinguished company in identifying the author as a disciple of Jesus other than John son of Zebedee. There is no question that the relevant Papias text may be read in that way. But I remain perplexed as to what has happened on this view to John son of Zebedee in the fourth gospel: he has been almost totally eclipsed by the elusive Elder, although the synoptics are unanimous about his importance within the twelve and about the closeness to Jesus as one of the inner three disciples (could we say that he is one of the ‘beloved disciples’?). Paul too identifies him as one of the pillars of the Jerusalem church (Gal. 2:9). Of course, there could have been two Johns who were significant disciples of Jesus, but where has the son of Zebedee gone in the fourth gospel, and what is to be gained by postulating another John who was very close to Jesus and to Peter? Is it likely that the early church references to John mean anyone other than the son of Zebedee?

This particular query does not take away from the importance of the book as a whole. It makes so many shrewd and important points, some of them indisputable, others of them less certain but well worth exploring by future scholars and research students. I hope the book will be taken as seriously as it deserves.