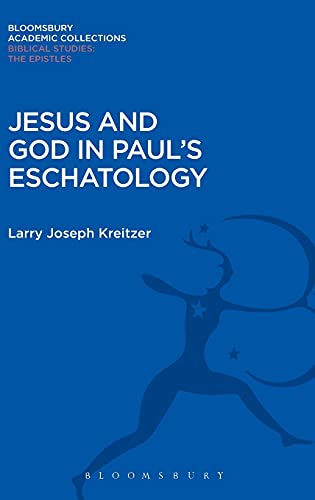 Jesus and God in Paul’s Eschatology

This is a revised form of the author’s PhD thesis, which was prepared under the supervision of Professor Graham Stanton at King’s College, London. Larry Kreitzer is now NT tutor at Regent’s Park College, Oxford.

Various approaches have been used in exploring Paul’s understanding of the relationship of Jesus to God. Some scholars, for example, have seen ‘wisdom theology’ as a crucial key to his Christological language. Others have focused on the way in which Christology developed through reflection on the OT, or through the church’s worship, particularly its use of hymns about Christ. Kreitzer proposes another route into the same question: what can be learnt from the fact that in Paul’s doctrines of the parousia (second coming of Christ) and the final judgment there is a certain identification of roles between Jesus and God?

In chapter 1 Kreitzer examines Jewish pseudepigraphical documents in order to establish a comparative basis for examining the Pauline material. He is especially interested in those documents which express belief both in a temporary earthly rule of the Messiah and in an eternal, heavenly kingdom of God, since such a ‘two-edged’ eschatological scheme appears to reflect ‘a tension between God and Messiah with respect to their eschatological roles and is a partial attempt at its resolution’ (p. 24). Whereas D. S. Russell claimed to find five such documents, Kreitzer’s careful study (greatly helped by the recent work of J. H. Charlesworth and others) identifies only three: the Apocalypse of weeks in 1 Enoch (though here the earthly kingdom is not specifically messianic), 4 Ezra and 2 Baruch. In the latter books, passages stressing God’s role at the final judgment exist alongside passages asserting the Messiah’s role in final judgment. Thus the Messiah is presented as the author of divine activity without any apparent sense of contradiction. But ‘it is not unreasonable to assume that the distinction between a temporary earthly kingdom and the eternal age to come is an attempt to sort out the confusion between the functions of God and of the Messiah’ (pp. 90–91).

Chapter 2 examines the parousia and final judgment in Paul. He observes that, as in 1 Enoch 46:1. Paul can speak of the throne of judgment being occupied either by God (Rom. 14:10) or by the Messiah (2 Cor. 5:10). There is a blurring of roles also in 1 Thes. 3:11–13. A similar phenomenon occurs where Paul transforms the OT idea of the Day of the Lord into an expectation of the Day of the Lord Jesus Christ (1 Cor. 5:5; and similar phrases in 1 Cor. 1:8; Phil. 1:6, 10, etc.). And in other passages such as Rom. 10:13 and Phil. 2:10–11 OT references to Yahweh become for Paul references to the Lord Jesus. All this points to ‘a delicate balance between theocentricity and Christocentricity in Paul’s thought’ (p. 129).

Chapter 3, on the Messiah and the kingdom in Paul, argues that in 1 Cor. 15:20–28 the apostle probably speaks of a temporary messianic kingdom before the eternal age to come, and that this modification of Paul’s normal teaching may arise from traditional Jewish speculations such as have been found in 4 Ezra and 2 Baruch. Kreitzer makes use here of the work of Albert Schweitzer, and particularly of Wilber Wallis (‘The Problem of an Intermediate Kingdom in 1 Corinthians 15:20–28’. Journal of the Evangelical Theological Society 18, 1975, pp. 229–242). The temporary earthly kingdom is located between the parousia (v. 23) and the ‘end’ (v. 24). The destruction of Christ’s enemies (v. 25) takes place during this interval.

1 Cor. 15:28 also raises the issue of Christ’s subordination to the Father. This indicates Paul’s concern to preserve monotheism despite his high Christology.

The book is an important exploration of the relationship between Christology and eschatology in Paul. It is clearly written, even though it is handling difficult material at times. And it makes valuable comments on several controversial questions which are not quite at the centre of its own concerns—How does the millennial teaching of Rev. 20 relate to Jewish apocalyptic ideas? How did the doctrine of the parousia arise in Judaism and Christianity? Are there developments or inconsistencies in Paul’s eschatology (as of course there are if 1 Cor. 15 teaches a temporary messanic kingdom)?

It is good to see a strong case made for a temporary messianic kingdom in 1 Cor. 15. But in the end I find it unconvincing. Kreitzer appeals, for instance, to Wallis argument that Paul distinguishes between two resurrections in this passage—a general resurrection of all people, and a resurrection of believers to eternal life. But it is very doubtful whether Paul has anything but the resurrection of believers in mind here. The argument is in fact difficult to follow unless one has access to Wallis’ article itself, and Kreitzer would have made out his case better if he had presented a detailed exegesis of his own. Also, he offers no suggestion as to why the idea of a temporary messianic kingdom crops up specifically in the context of 1 Cor.

There are a number of misprints, particularly in citations of Greek texts. But this is undoubtedly a significant study touching on numerous important issues, and a stimulus to further study of Paul’s Christology and eschatology.

The place of biblical criticism in theological study

Did Jesus and his followers preach the right doctrine from the wrong texts? An examination of the presuppositions of Jesus’ and the apostles’ exegetical method

The Sabbath: mark of distinction

by David T. Williams
VIEW ALL VIEW ALL

The Purification Offering in the Priestly Literature: Its Meaning and function

The Story of David and Goliath. Textual and Literary Criticism. Papers of a Joint Research Venture

Israel Alive Again: A commentary on the books of Ezra and Nehemiah

History and Ideology in Ancient Israel

Reviewed by A. R. Millard
History and Historical Theology
VIEW ALL VIEW ALL