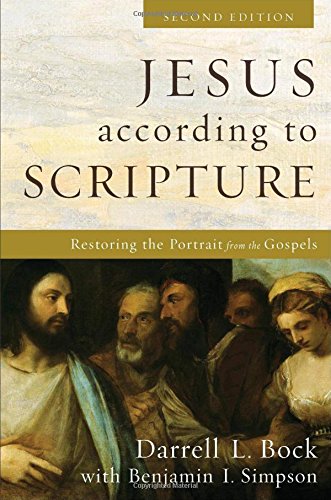 JESUS ACCORDING TO SCRIPTURE: RESTORING THE PORTRAIT FROM THE GOSPELS

This book comes from one the most significant evangelical scholars active today, Research Professor of New Testament at Dallas Theological Seminary, and author of the landmark two-volume commentary on Luke’s Gospel (Baker Exegetical Commentary). The present volume is part of a series of books by Bock on Jesus; Studying the Historical Jesus has already been published, and Jesus According to Scripture promises a third volume called The Jesus Reader. (The volumes are related, but do not form a sequential trilogy; each book is able to stand alone.)

This volume is divided into four parts: first a very brief overview of the content and emphases of the four Gospels. The second part, ‘Jesus According to the Synoptists’, is by far the longest (360 pp). There follows ‘Jesus according to John’ and finally ‘A Theological Portrait of Jesus’. Bock makes it clear that the aim is to present a canonical picture of Jesus, rather than one which is the fruit of historical reconstruction. The work focuses on the final form of the Gospels. The rationale for treating the Synoptic Gospels in the first instance separately from John is noted in Bock’s often repeated statement that the first three evangelists view Jesus ‘from the earth up’ while John works ‘from heaven down’ (24).

In terms of the content, the book proceeds through the various pericopes, according to the divisions in the standard Gospel synopses: part two starts with Luke’s prologue, then Matthew’s genealogy, moving through the ministry, death and resurrection, and concluding with the ascension. The main body of the work is a paraphrase with commentary, often providing useful background material. There is also interaction with scholarly debates, but this almost invariably confined to the footnotes and in any case is brief (on average, only one or two footnotes per page). The discussions are invariably a helpful digest of the material from a conservative standpoint.

The main flaw in the book is that in part four, the theological portrait of Jesus, there is relatively little use made of the Gospel of John. The section begins with a statement about the incarnation (which is everywhere presumed) and again the point is re-emphasised at the end. However, because a third of this section covers the theme of the ‘kingdom’ (very rare in John) and the rest of the material in this part is also weighted in favour of the Synoptic Gospels, there is a lack of proportion.

The target audience is students who are taking courses on Jesus and the Gospels, and since its scope is very focused, the book will have to be supplemented with other commentaries. But with the caveats noted above, the book will serve as a useful textbook in this regard.