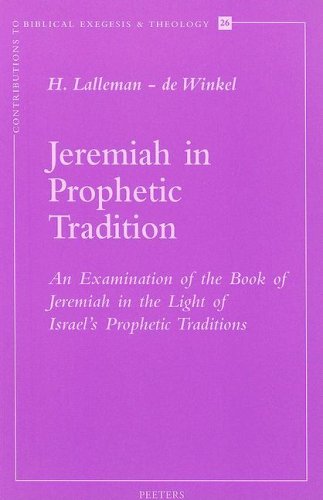 This slightly revised PhD thesis investigates the relationship of the book of Jeremiah with those of Hosea and Amos. Questioning the widely held view that Jeremiah in its present form is a deuteronomistic product. Lalleman-de Winkel argues instead for Jeremiah to be located in a ‘prophetic tradition’.

First reviewing Jeremiah research from Duhm to Carroll, the author investigates proposed deuteronomistic influences. Important issues include the poetry—prose ‘problem’ (prose was first attributed to deuteronomistic redactors). Baruch’s role in the book’s production, and the relationship between Jeremiah and the Josianic reform.

Secondly examining prophetic traditions, the author finds no conclusive evidence to support an alleged northern context for Deuteronomy, supposedly exemplified by E, D and Hosea. She denies the distinction between northern and southern prophetic traditions, and concludes that Jeremiah cannot be located in a distinct northern tradition.

Then in the following chapters Lalleman-de Winkel examines in turn repentance and hope, the covenant, and the prophet’s role. Tracing these themes in Hosea and Amos, often thought to represent northern and southern traditions respectively, she argues that Jeremiah stands in both traditions.

Repentance and hope are not post-exilic, deuteronomistic additions, and the alternation between judgement and hope is best explained by developments in the prophets’ own understanding. Thus Hosea and Amos as well as Jeremiah initially believed that repentance could avert divine punishment. Then followed the realisation that judgement was irreversible, which in turn led to hope of a new beginning, initiated by Yahweh’s love and mercy.

Similarly regarding covenant. The concept, widespread to the ancient Near East, is found in pre-exilic prophetic texts, and Jeremiah stands in this tradition. The author again proposes a development: a period in which the prophets expected the people to fulfil their covenantal obligations was followed by breach of the covenant, and eventually by the promise of a new covenant in Jeremiah.

As to the prophet’s role, Jeremiah followed Amos in intercessory prayer, first attempting to prevent divine punishment, then realising that it was irreversible. But he stands in the tradition of Hosea regarding suffering, as both their lives illustrate the crisis in the relationship between Yahweh and his people.

This study is a welcome attempt to reverse what Lohfink once described as pan-deuteronomistic tendencies in OT studies. As such, there is much of value here. But the project suffers from being too ambitious. For instance, the dating of prophetic oracles of hope is highly controversial, and the author gives hostages to fortune by basing her case on a pre-exilic dating of these passages. To be fair, she is well versed in the critical issues, but apparently space did not permit her to engage some of them in suitable depth. Regrettably, her case is not helped by several grammatical errors and stylistic peculiarities, which could have been eliminated with editorial help. However, these criticisms should not deter anybody engaged in Jeremiah research from consulting what is a valuable study, which promotes an alternative understanding of this important book.