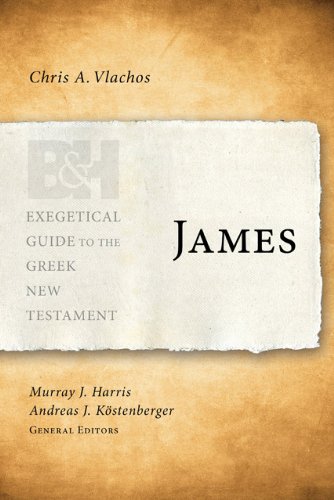 A unique and useful tool, Chris Vlachos’s James fills an unexpected gap in the field. Neither a commentary nor simply a grammatical guide, this book distills both in easy-to-use form. Vlachos helpfully integrates the best of older Greek commentaries (it is telling that the most recent commentary on James to have come out was Martin’s in 1988) with the insights from more recent commentaries, articles, and monographs, while remaining incredibly concise.

The book follows a straightforward format, unfolding in ways similar to a commentary. First there is a very brief (six-page!) introduction that lays out issues of authorship, date, occasion, and purpose and marshals very brief arguments for early authorship by James, the brother of Jesus. Vlachos does not, however, make a huge point out of his position, instead allowing the reader to draw their conclusion from his briefly highlighted reasoning. This introduction in no way substitutes for a commentary’s lengthier exposition, but that statement may hold for the book more generally.

The rest of the book cycles through a consistent format: first is a descriptive summary of a small portion of the text, highlighting the structural links holding the section together. This is followed by a detailed verse-by-verse exposition in which every grammatical tag is given, but unlike books that focus solely on the grammar, Vlachos balances grammatical issues with lexical and syntactical ones so that the full breadth of exegetical complexities are on the table. Where there are two or more positions of interpretive significance, these appear in outline form, followed by translations and commentators that defend each. Where relevant, a star (*) signals the position supported in the text. The third section, “Further Study,” provides a select bibliography on any number of topics the text raises, whether larger theological dilemmas or more precise exegetical questions. These are not intended as comprehensive bibliographies, but as starting-points for further study on the given issue. Fourth and finally, each cycle concludes with the category of “Homiletical Suggestions,” which offers two to three sermon outlines of various types.

The strengths of the book are fairly self-evident. Because of the highly streamlined nature of this text, it works exceedingly well as a quick-reference guide for the student or pastor who needs an orientation to the issues within the text of James. Overall, Vlachos proves to be a relatively uncontroversial interpreter of the text, but even where he may vary from the most widely held positions, he presents the variety fairly and generally explains why each is supported. Even better, for those who can find the lengthy discussions in commentaries confusing, the formatting highlights the controversies in outline format first, and discussion follows in an orderly fashion. Vlachos surveys a wide range of sources, from grammatical tools generally inaccessible to the average pastor not near a library to a wide diversity of commentaries and translations. The homiletical outlines would prove a boon to preachers who find themselves uncertain how to jump from deep exegetical effort to a workable sermon outline.

The weaknesses, however, are matched to the strengths of the book. First, the brevity of each discussion (at longest two paragraphs are dedicated to a significant interpretive issue) can lead the uninformed student to think that conclusions can be drawn quite so quickly. Second, the homiletical outlines are given only for each small subsection of the text, leading to multiple sermons on a single verse, and the book is broken into twenty-one separate sections. There is no sense given for how the smaller exegetical sections may fit together under the larger headings, nor how James lends itself to anything other than disjointed sermons on small sections of text. The book would have been stronger had there been a greater emphasis at points on the rhetorical unity of the epistle, which Vlachos appears to argue exists.

This book, however, is a bit of a surprise prize: it succinctly distills the best of the commentaries for those who wish to continue developing their familiarity with the Greek of James. While it cannot replace commentaries, it serves those meeting the complexity of James for the first time, and it offers a great deal of condensed detail for the scholar who needs a quick refresher on the issues in the text.