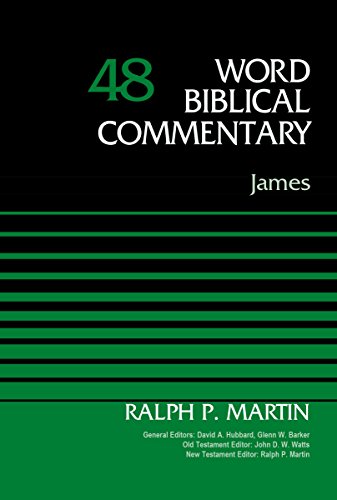 Word commentaries aim at a very wide assortment of readers, from student to scholar. Each volume’s ability to do that well depends on its author. This volume by Martin reflects his scholarly temperament. Students reading it will face unexplained technical language, untranslated Latin, French and German, and some unusual phrases. Although Greek is translated as in other Word commentaries, Martin includes such large contexts sometimes (1:17–19a; 1:21–23) that a novice or non-Greek reader will be lost in the ensuing discussion. Also, Greek phrases within his discussion sometimes are left untranslated. An extended discussion of early Christian writers’ use of James may stimulate informed scholars, but an assumed familiarity with the content of their writings will leave the student frustrated.

Evangelical students and scholars will appreciate much of Martin’s discussion about the historical James. Martin denounces the views of F.C. Baur which imagine James and Paul as antagonists during the formative years of the church. Rather, Martin takes seriously Acts’ portrayal of James’ mediation between Paul and the conservative Jerusalem church. Martin applauds the canonical status of the Epistle of James both on the grounds of its theology and overall message.

Some may be perplexed when Martin attributes to James, the Lord’s brother, only the ‘deposit of James’ teaching’. Upon this deposit, Martin proposes, a first edition of James was published by his disciples who fled Jerusalem for Syrian Antioch after his martyrdom in AD 62. This is how Martin accounts for such evidence as early support for this epistle in Syria, the allusions to Syrian climate in 5:7, and the literary connections between James and Matthew. The Hellenistic idioms and other forms of expression in James, as well as the epistolary form, come from that ‘enterprising editor’ who was trying to undergird the authority of teachers in his community. Martin is surprisingly unclear on whether or not the historical James actually wrote anything which appears in the Epistle of James.

The value of Martin’s hypothesis is that it puts flesh and bones on similar views announced by Peter Davids in his 1982 commentary in the NIGNTC series. An evangelical position need not be tied strictly to historical or even unified authorship. The value of James to the church today is not diminished one way or the other. However, many evangelical scholars would legitimately question whether a loyal disciple of James would go as far as Martin suggests in transcribing his master’s teaching. Personally, I question whether postulating an editor has enough advantages to overturn the traditional view that the Lord’s brother authored the epistle.

Despite the challenge Martin’s views on authorship may be to conservative evangelicals, they are a thought-provoking attempt to move people away from viewing James as a ‘general’ epistle and toward seeing James as a reaction to real problems in a church or a group of churches. According to Martin, James the apostle sought to unite two opposing factions in the Jerusalem church. The later editor sought to strengthen the position of valid teachers against false teachers in the Syrian churches.

Martin’s commentary contains many other strengths. In his introduction, he reviews the current debate on ‘Jewish Christianity’, displays prominently the parallels between Matthew and James, expounds on the wisdom background of James, attempts to identify the various classes of poor that James champions, and interacts with structural outlines found in other commentaries before suggesting his own. This last feature surprisingly includes Motyer from the ‘Bible Speaks Today’ series, an expositional commentary, yet excludes Moo from the Tyndale series, which is more academic and very thoughtful.

The commentary proper features in-depth analysis of words and phrases, supplying a wealth of background for interpretation. He does an excellent job of interacting with other current commentaries. Most prominent are Adamson, Davids, Dibelius, Moo, Mussner, Ropes and Vouga. He sides often with Moo, neglects Laws, and reserves his most stinging comments for Scaer. Rightly, he presents a strong argument against Davids’ unusual view that 1:13 should be read as ‘trial’ and not ‘tempt’.

On the most discussed passage of James, 2:14–26, Martin presents insightful analysis. First, he does an excellent job of setting the context. He demonstrates a vital connection between 2:14–26 and 2:1–13, something many commentators overlook, by displaying both formal and stylistic parallels between the two. Secondly, his excursus on faith and works with regard to Paul, while brief, is an excellent summary of prevailing views. He maintains the credibility of James’ point without undercutting Paul’s. Thirdly, he handles well the question of where to put the quotation marks in 2:18, settling for, ‘You have faith and I have works’. Fourthly, throughout his comments he shows himself to be extremely well read.

Martin’s comments on some passages are disappointing. He does a good job on background parallels but does scant interpretation of the proverb in 1:19. In 2:1–13 he is convinced by R.B. Ward (‘Partiality in the Assembly: James 2:2–4’, Harvard Theological Review 62(1969), pp. 87–97) that the setting is judicial rather than for worship. I agree with Laws (pp. 101–102) that Ward’s is striking but too specific for the general description James gives. In 3:1–12, Martin maintains that James’ images are ecclesial rather than anatomical. James’ primary concern may be the church and teachers, but Martin sometimes gets the cart before the horse in his analysis of these verses. James’ images begin in the sphere of a person’s body or general experiences. The church is one of a number of applications, including the individual.

Martin’s volume contains a few organizational weaknesses which need to be noted. The most striking comes in his introduction, where he depends on a PhD thesis by M.I. Webber he supervised. He refers to this thesis four times in section two but does not provide the reader with bibliographic information (other than the Author’s Preface) until the bibliography list of section three. Martin’s volume also displays imprecise internal reference occasionally, as when on p. 36 he simply says ‘see earlier’.

Finally, it seems to me that Martin’s ‘Explanation’ of each section included material that was too wide-ranging, some of which seemed to fit better in the Form/Structure/Setting. I recognize that Martin is the NT Editor of this series and his use of the ‘Explanation’ sections may well model what the series intends. However, I find the brief, simple summaries of the text’s intention and contemporary applications in earlier volumes like those of Bauckham (2 Peter and Jude), Bruce (1 and 2 Thessalonians) and Smalley (1, 2, 3 John) much more helpful than the lengthy and varied use of the section by Martin in this volume.

Martin’s volume on James, then, has its strengths and weaknesses. In the tradition of the Word commentaries, it is thorough on bibliography and commentary. Martin is at his best when he is digging into the background of a word or phrase and when he is interacting with other scholars. However, a clearer explanation of his final interpretation of a verse sometimes would help. Evangelicals may be dissatisfied with his judgment on authorship, but his volume is worthy of careful study. Students may appreciate a commentary like Martin’s in later years, but I do not recommend it as a student’s first volume on James.