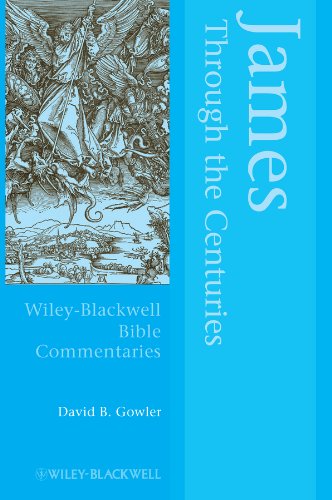 James through the Centuries

I have rarely read a commentary with such pleasure. In fact, it is tempting to leave the review there, but that would not do justice to this volume in a developing series. The author spends a fair bit of his introduction explaining the purpose and methodology of this commentary, and it proves time well spent as the book reads just differently enough from a standard commentary as to need explanation. Gowler, and the series editors, are not seeking to do standard historical-critical exegetical commentaries, the like of which are commonplace and growing these days. Instead, he seeks to gather and place in dialogue (following Bakhtinian dialogic interaction, p. 3) the history of interpretation on each passage, whether in art, poetry, philosophy, preaching, or other sources. Unlike the Ancient Christian Commentary series (IVP), this commentary is not tied either to one era, nor is it tied to written sources that are placed contextless next to each other as simple quotes. That alone sets this into a highly unique niche in the field, as it acknowledges that interpretation occurs in many settings, not simply through scholarly dialogue, and so it acknowledges the popular and cultural appropriation of the texts. In an age when we are realizing the privilege given to written sources and certain forms of argumentation, this commentary fills a much-needed void in the history of interpretation.

This book follows standard commentary format of an introduction and subsequent unpacking of the text in verse order. The introduction sees to establish the way of reading the book through explaining the methodology and introducing some interpreters, but also illustrating the methodology by using historical interpretive voices and images to answer the question of authorship, exploring the identity of “James of Jerusalem” in the NT and outside. The book then breaks the text of James into larger sections (e.g., 1:1–11, 12–27; 2:1–13, 14–26, etc.), following the standard verse breaks, but within each section examines the text in 1–4 verse segments. There are some editorial choices, such as treating 3:13–4:12 as one section entitled, “The Fruits of Wisdom versus Friendship with the World,” while 5:7–11 stands as the shortest independent chapter and 5:12–20 remain together, implying that Gowler views all of vv. 12–20 as functioning as a conclusion (although he does not make that explicit). Within each larger section, the shorter verse exposition is broken into sections: a brief introduction to the “ancient literary context” (which is the best place for determining Gowler’s stance as he gives a brief summary of the intent of the passage and some modern commentators), and then the two stages of “interpretations,” the “ancient and medieval” followed by the “early modern and modern” (which begins at the Reformation). Within these sections, Gowler consistently shows the interpretations of his chosen “Key Interpreters” (introduced in pp. 8–19), but also any number of other interpreters and interpretations, such as engravings, paintings and poetry, placed according to their appropriate eras. The artwork in particular creates a dialogical effect, as one examines the various pieces next to each other to see the varied depictions.

The greatest strength of this book is the great variety it offers, and in particular Gowler’s effort to bring in materials and artwork “not readily available” (p. xv). He handles the art criticism invitingly, making the verbal scholar in me realize what a field has been missed. While I regret not seeing Milton’s depiction of the incestuous relationship of Satan, Sin, and Death in the text at 1:13–15, the depth and breadth of introduced works is a delight. Even more helpful is the way in which Gowler consistently introduces new authors and artists, giving them a context and a backstory that places their interpretation within their lives and their wider historical context, recognizing that each person works from a context. In so doing, Gowler reinforces his interpretive method introduced in his section on Bakhtin (pp. 3–5). One that struck me profoundly was reading of “Hus’s most poignant use of James 1:2–4,” written “as Hus was preparing to be burned at the stake” (p. 68). When faced with that context and his subsequent excerpt, no longer can “count it all joy when you face trials of any sort” simply refer to failing to find a convenient parking space. By giving the authors’ contexts, we are forced to take their words all the more seriously.

The other great strength of the work is his choice to include extended excerpts whenever quoting someone, such that we read their words in their own setting, not simply the most relevant and zippy quotes. As such, the potential for misunderstanding them is reduced (never eliminated, unfortunately), and the chance for a dialogue is increased. That is balanced, however, by the book’s greatest weakness. By dealing with each author segment by segment, the book reads in quite a choppy manner, with no sense of flow other than that of chronology. This results in some repetition as we go over the verses, in say 2:1–7, over and over again in the different authors, picking up each one’s emphases, wherever they may lie in those verses (pp. 144–61). More disconcerting, though, is the apparent lack of dialogue, as each author is introduced and examined and then set aside for the next, without connection or continuity. It falls to the reader, therefore to imagine the dialogue between these various authors and artists, for Gowler seeks to present them in as neutral a way as possible.

The only other critique I would present is that this book, which seeks to ensure the presence of marginalized voices (see pride of place given to Frederick Douglass and Elsa Tamez alongside Augustine, Luther, and Kierkegaard as key interpreters), still manages to heavily prioritize Western readings and art. I would have been highly curious to read from African or Asian scholars and artists and their appropriation of this text in their church and scholarly life, but their voices remain strangely silent, even while liberation and feminist voices are highlighted and given priority. Granted, one book cannot cover everything, but I was surprised by this near-silence in a book that seeks to elevate the marginalized.

Overall, however, this book does a remarkable job of bringing to light interpretations that have long been sidelined. Gowler retains his own voice throughout, but also opens worlds of art, theatre, and poetry that have intersected with this little book, revealing that perhaps the history of the reception of James has not been as neglectful as some of us fear. Gowler writes in an engaging manner, drawing us into the lives and work of those who have wrestled with the text of James, and the reader leaves this book refreshed intellectually to deal with the challenges James presents us, but also confronted pastorally with the relevance of this practical text. This book should be on the shelves of academics and pastors, and used regularly by both.