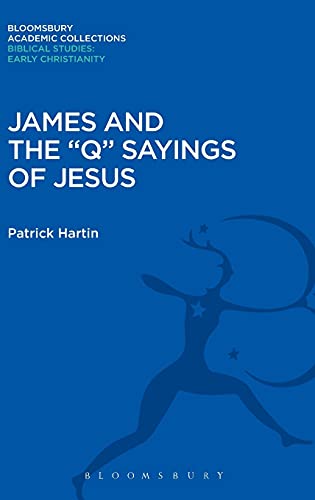 James and the Q Sayings of Jesus (JSNT Supp. Series 47)

This book ‘aims at situating the Epistle of James within the thought and traditions of early Christianity’ (p. 12). Thus Hartin ranges more broadly than the title indicates, arguing that ‘James’ can be situated within the matrix of a community reflecting on both OT wisdom traditions and the ‘Q’ sayings of Jesus. Unfortunately, however, the written style could be improved (it tends to be verbose and repetitive) and the bibliographical coverage is slim (with limited appeal to primary sources).

Hartin asserts that James should be regarded as a ‘Jewish-Christian document par excellence’, expressing the message of Jesus through wisdom categories (p. 22). The prominence of ‘wisdom’ (never adequately defined) is revealed in a chiastic arrangement of the main body of the epistle, where wisdom from above (3:13–18) occupies the central pivot. Thus ‘wisdom’ is the heart or core of the whole epistle (p. 31). A survey of ‘wisdom’ thought reveals two features: (i) a concern to provide instruction for life (i.e. ethics); (ii) a tendency to personify Wisdom. In chapter 2 (‘The Role of Wisdom in James and Q’) Hartin accepts the view that Q is a wisdom document, containing wisdom admonitions and teachings (within an eschatological framework). He then argues that wisdom sayings and admonitions are also characteristic of James. Since beatitudes, woes and comparisons link James, Q and the wisdom tradition together, it follows that the ‘Sitz im Leben of the community of Q and that of the Epistle of James appear to be very similar’ (p. 78).

Chapter 3 examines ‘The Nature of Wisdom in James’ (esp. 1:2–8; 2:1–13; 3:13–18). He concludes inter alia that the title of 2:1—‘the Lord of Glory’—involves an identification of Jesus as the eschatological wisdom of God (i.e. James has a very ‘high’ Christology, p. 95); and that James’ teaching about ‘wisdom’ corresponds to teaching in the rest of the NT about the Spirit. Chapter 4 assesses ‘wisdom’ passages in Q (Lk. 11:49–51; 7:31–35; 13:34f.; 10:21f.; 11:31), where Jesus is presented as the expression or spokesman of wisdom. Matthew has developed these in the direction of Jesus as wisdom incarnate; James stands somewhere between Matthew and Q (exactly where is not made clear). These four chapters together suggest that both James and Q reflect the two major features of the wisdom tradition: ethical instruction and the personification of wisdom (albeit in different ways).

This connection provides the basis for his investigation of the well-known parallels between James and the Jesus tradition. Particular attention (chapter 5) is given to the Sermon on the Mount (/Plain), from which it emerges that James was familiar not only with Q, but also with Q as understood within the Matthean community (QMt). This is supported by the investigation of other parallels with Q and the traditions behind Matthew and Luke (chapter 6). Finally, the theme of perfection in James and QMt (chapter 7) provides further evidence to support the conclusion that ‘the Jesus tradition’s evidence in Q and the development of Q with in the Matthean community form the basis for all James’s instructions’ (p. 215).

In a final chapter Hartin closes the discussion with his ‘Vision of the Emergence of James within the early Christian Community’ (cf. his stated aim). In this reconstruction Antioch plays a crucial role: birthplace of the Greek Q and the Matthean community, scene of the clash between Paul and the Jerusalem church, etc. James is seen as dependent upon the Q traditions and the reflections of the Matthean community in Antioch, written after the Council of Jerusalem (when the controversy had died down), perhaps in the late fifties ad.

The conclusion ‘that James has deep and firm roots both in Judaism and in early Christianity’ (pp. 240f.) is hardly contestable; but Hartin’s more detailed conclusions certainly are. Even if one agrees with the general approach—that documents reflect communities rather than authors, that the synoptic problem requires a purely literary solution (to the extent of three different Q documents!), and that the early Christians freely invented sayings of Jesus—there are problems with this book. Many assertions are made without the support of evidence or argument (see e.g. pp. 22, 25f., 79, 83, 86, 170f.); sometimes evidence is adduced, but it is unpersuasive (e.g. on the identification of wisdom and spirit, pp. 102f.); at other points the logic of the argument failed to convince the reviewer (e.g. pp. 20, 27, 30, 60, 90, 92, 159, 161). Even when Hartin seems right, one wishes for a more solid argument. In particular, there are methodological weaknesses. One is a form of parallelomania: Hartin never distinguishes between parallels which demand dependence and those which are merely due to a common inheritance in first-century Judaism. In order to make his case he must show not only similarities (either between James and a form of Q, or between James and the wisdom tradition), but that these similarities can only be explained by literary dependence. Attention to such matters would have resulted in a stronger argument.