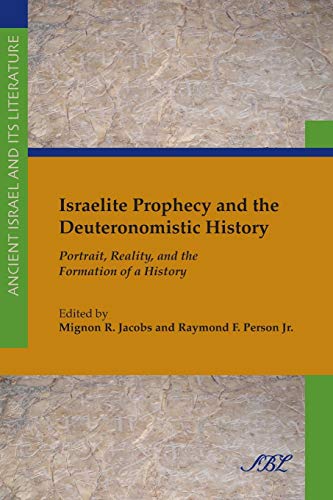 Israelite Prophecy and the Deuteronomistic History: Portrait, Reality, and the Formation of a History

This book is a collection of essays taken from a 2010 SBL joint session between the Deuteronomistic History section and the Israelite Prophetic Literature section. Since the scholarly discussion on prophecy has been changing rapidly in the last few years, the contributors met to explore the phenomenon of prophecy “behind the literature and the literary portrayal of prophecy in Deuteronomy-Kings” (p. 1). The usual portrait of the Israelite prophet was primarily derived from the Latter Prophets, leaving the Former Prophets largely unexplored in comparison. Moreover, studies in ancient Near Eastern documents, especially the prophetic texts from Mari, have enriched our understanding of the prophet in the ancient Near East, thus allowing for fruitful comparison with the biblical material.

However, the contributors to this volume largely assume that the biblical material does not offer a historically accurate picture of Israelite prophecy. This assumption hinders their reconstruction of the historical Israelite prophet, for the biblical material has supposedly undergone a complex redaction and one would have to peel back the layers in order to reach the historical kernel. Issues of methodology can become paralyzing when there is no consensus on how many redactions are found in the Deuteronomistic History or even to which historical period each literary passage should be assigned. There are, however, some common observations in the book, as the editors summarize: “[T]ogether these essays strongly suggest that the ancient Israelite prophets were not isolated charismatic individuals, but intermediaries who functioned within larger cultic settings” (p. 6). Due to lack of space we are only commenting on a few essays that are representative of the whole.

Rannfrid Thelle points out that the Former Prophets offer much more highly individualized characterizations of prophets than the Latter Prophets, but it is not clear what is typical of prophets and what is specific to the individual. In looking for typical prophetic patterns in these books, Thelle discovers that one of the more significant prophetic functions is that of the religious expert in divine consultation, especially regarding warfare. Although there has traditionally been an emphasis on distinguishing between divine inquiry and prophetic proclamation, Thelle thinks both should be considered as reflections of a larger phenomenon of divination. She thinks that Deuteronomy’s polemic against certain divinatory methods is undertaken not because they are ineffective, but because “there was a need to emphasize the finality of the law as the codification of divine revelation” (p. 29). Thelle observes an intensification of this in Chronicles and concludes that the need to control divination grew as prophecy began to become a written phenomenon (p. 30).

Marvin Sweeney, after questioning the frequently offered suggestion of a priestly redaction on the Former Prophets designed to turn the prophet into a priest, proceeds to show the priestly elements in the depiction of prophetic figures from the north, Elijah and Elisha. Sweeney spots such elements in incidents such as the prophetic contest on Mt. Carmel which includes the administration of sacrifice (1 Kgs 17), Elijah’s experience at Horeb reminiscent of an encounter with Yahweh in the Holy of Holies (1 Kgs 19), his ascent to heaven portrayed in terms analogous to a whole burnt offering (2 Kgs 2), and Elisha’s connections with music (2 Kgs 3), itself a feature of temple worship (e.g., 1 Chr 15:16–24). Although some of these incidents are unique and may not circumscribe the prophetic office in the north, they could cumulatively sustain Sweeney’s conclusion that Elijah and Elisha may have functioned in some priestly capacity in northern Israel.

Martti Nissinen’s essay offers a comprehensive examination of the Deuteronomistic History in the light of ancient Near Eastern sources from Mari and Assyria and concludes that “the biblical narrators were familiar with the phenomenon as an ancient tradition, probably also as a contemporary practice” (p. 128). Despite the many similarities noted, the biblical portrayal of prophets diverges from ancient Near Eastern models in various aspects, such as in the performance of miracles and the exercise of control over the forces of nature. Both these elements are seen in Elijah’s and Elisha’s stories, for example (p. 125).

Lastly, Mark Leuchter shows how some circles initially regarded Moses and Samuel as parallel figures in their priestly capacity (e.g., Ps 99:6). He begins by examining the portrayal of Samuel at Shiloh and his priestly connections to the Elides, favoring the historical genuineness of this connection (p. 157). First Samuel 3 especially highlights Samuel’s priestly credentials, over and against the line of Eli, by connecting Samuel to Moses. This connection occurs not only through an emphasis on unmitigated divine encounter in the absence of a vision (p. 161), but also through emphasis on the priestly maintenance of social order, a task which the Elides had failed to do (p. 163). This Mosaic connection that served to endorse Samuel as a better priest was, according to Leuchter, what subsequently commended Samuel as a Mosaic prophet in the Deuteronomistic mold (p. 167). According to Leuchter, the Deuteronomistic History then seeks to bring Samuel into the Mosaic tradition, not as priest now but as prophet.

Overall, the observations of cultic elements in the prophets of the Deuteronomistic History made by the contributors are astute. However, the reader should remember, as already noted in the introduction, that the historical reasons proposed to explain these phenomena are harder to prove. These cultic elements can be interpreted in a variety of ways, usually according to each scholar’s accepted framework of redaction.

I highly recommend this book. The wealth of scholarship contained in this volume will benefit the student of Israelite prophecy and bring one up to date with the latest contributions in this area of research.