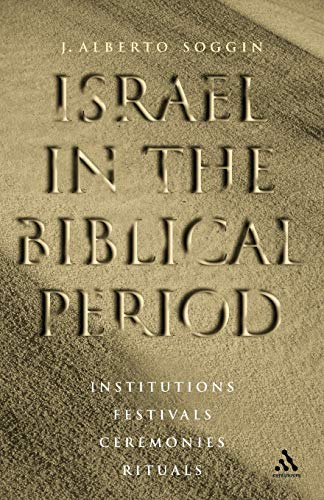 The scholarly assessment of Israelite religion and its development has changed considerably over the last twenty or thirty years. There has been a growing emphasis on the importance of the post-exilic period and a rejection of an early monotheism in Israel. For these reasons accounts of Israelite religion have had to be rewritten. Soggin’s Israel in the Biblical Period is a short and readable introduction to various aspects of Israel’s religion. A number of miscellaneous elements are included, such as the covenant, cult and sacrifice, but the majority of the book has two focii: the development of monotheism and Israel’s festivals.

Soggin’s account of the development of monotheism begins with the ‘traditional’ version of the origin of monotheism—the view that was held prior to 1980. Some of the problems with the older consensus are shown by a discussion of the sources for Israelite religion, particularly the Deuteronomistic History. Gaining a critical view of these sources allows a more accurate perspective on monotheism to emerge. Monotheism is the result of a long process of development that had polytheism and henotheism as its earlier stages. Unfortunately, no reason is given for the transition to the rest of the book. Indeed, despite the book’s accessibility to the reader it is devoid of any signposting. Soggin’s intention seems to be to describe the way that the new monotheistic Judaism appropriated its Canaanite religious heritage, particularly the agricultural festivals that had been associated with other deities such as Baal. Each of the major festivals is described including Purim, Hanukkah, Sabbaths, New Moons and Jubilee year. The chief characteristics of the festivals are given and their origins sketched.

According to the cover description, ‘Soggin gives an account of all the main features of Israelite and Jewish religion in the biblical period’. It is true that certain aspects of Israelite religion are covered, but many areas are omitted, including the priesthood, images, goddesses, the cult of the dead (or lack of it). For these the reader must go elsewhere. Better summaries of the current scholarly consensus on monotheism exist (for what they are worth), but Soggin provides a useful introduction to Israelite festivals.

Unfortunately, however, the book contains a number of traps for the unwary. It is not true that ‘prophecy is attested among the neighbouring peoples from the second half of the second millennium bce on’ (6) and the survivors of the Babylonian invasions might have been surprised by Pompey’s visit to the temple in 563 bce (43). There are other examples of errors: Israel(ites) used when Jews would be expected (1, 2); ‘Jewish’ used of the Hebrew language (8); the number of Canaanite groups said to be fixed at a maximum of seven (16; there can be up to ten); Isaiah 40:15 describing the gods as a drop from the bucket (51; it is the nations that are so described); Deuteronomy 7 described as expulsion of the Canaanites (4) There are also a few examples of, what I assume are, poor translations, including ‘Israel cannot boast any law [to the land]’ instead of ‘Israel cannot boast any right’ (58).