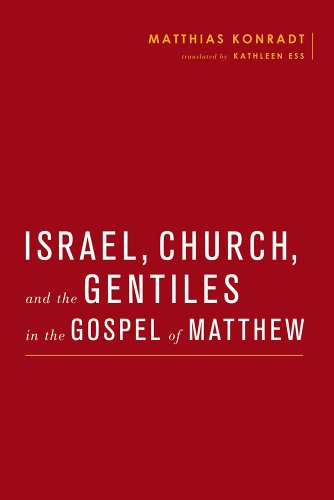 Israel, Church, and the Gentiles in the Gospel of Matthew

This English translation of Konradt’s 2007 WUNT monograph, Israel, Kirche und die Völker im Matthäusevangelium, circles around several critical Matthean issues in exploring the relationship between Jesus’s mission to Israel and to the nations (and by extension the mission of the disciples and the church). That is: how are we to understand the relationship between 10:5–6 (cf. also 15:24) and 28:19? The former instructs the disciples to “Go nowhere among the Gentiles and enter no town of the Samaritans, but go rather to the lost sheep of the house of Israel” while the latter sends them to “make disciples of all nations.”

Konradt concludes that there is a strong emphasis on the ministry of Jesus and the disciples to Israel from the outset that does not abate by the end of the narrative. The movement to the Gentiles does not eclipse the mission to Israel, for the disciples “will not have gone through all the towns of Israel” before the Parousia (10:23). Their preaching ministry to Israel, consequently, continues in the life of the church. The universal mission, on the other hand, does not come out of nowhere. It is more than anticipated in the name “son of Abraham” (1:1), the worship of the magi (2:1–12), and appearances of other Gentiles throughout the narrative. But it is more publicly disclosed as the story climaxes in the cross, resurrection, and ascension. These two missions are not to be seen in competition with each other, nor does one “replace” or “supersede” the other. Rather, the mission to the Gentile world is part of the Jewish Messiah’s mission to Israel; in the OT it is an expected part of the restoration of Israel. More than that, it has been God’s intention since the election of Abraham. “Matthean universalism is thus grounded in Israel, just as vice versa, with Abraham, and so from the very beginning, Israel is directed toward the Gentile world” (p. 268). Therefore “28.19 supplements 10.6” (p. 316) because the mission to the nations is a “theological necessity” (p. 309), the “completion of [Jesus’s] mission to Israel” (p. 308). This soteriological relationship is encapsulated by Jesus’s two-fold messianic identity: Son of David and Son of God. The former pertains to his mission to Israel, which is evident from the beginning and retained throughout the narrative. The latter represents his mission to the world, which is present from the outset but undergoes a “sophisticated uncloaking” (p. 287) by the end.

Konradt moves, then, to consider the relationship between Israel and the ecclesia, which is not is to be collapsed into the relationship between Israel and the Gentiles. To be sure, the dynamic between 10:5–6 and 28:19 speaks to both, but they are not the same issue. Konradt concludes that the ecclesia should not be considered the new Israel, true Israel, nor in anyway equated with Israel. “Rather, the ecclesia is the part of Israel (and the rest of the world) that has recognized the Christ event … as the eschatological salvific act of Israel’s God and has allowed itself be called to discipleship and follow Christ” (p. 336). It now has a mission to both Israel and to all the nations. Israel, therefore, are still “the people of God,” only now with a new role: they are the first recipients of the preaching of the Messiah. Thus, Israel is not “replaced” by the church.

Moreover, in Matthew there is no collective or generalized condemnation of Israel. Rather, “Matthew depicts a differentiated reaction to Jesus in Israel” (p. 135) whereby the crowds are distinguished from their leaders (especially those in Jerusalem) who will be judged. The Jerusalem leadership, therefore, are replaced by the disciples as the teachers of Israel, and the Temple is replaced by the church as the locus to which the Gentiles come for salvation. This is the point of the parables in 21:28–22:14 and the use of Isa 56:7 in 21:13, all of which must be read in the context of chapter 23’s woes on the Jerusalem authorities (including “this generation”, which again refers to Israel’s leaders). The crowds, then, have to choose between the old regime and the new Messiah.

Konradt’s multidimensional thesis has a lot to commend it. I will mention only two of its several strengths. While his understanding of Matthean universalism rising organically out of the Messiah’s mission to Israel as the fulfilment of OT expectations is not new, his argumentation for it is very thorough and nearly unassailable. This should be a standard work for years to come on the ever pressing question of the relationship between Israel and the nations in the narrative discourse of the first gospel.

Secondly, Konradt is correct that “replacement” theology needs to ignore all the positive attention given to Israel in Matthew. It basically has to make Jesus a failure in his efforts toward “the lost sheep of the house of Israel” (15:24). Related, Konradt is right that Israel does not collectively reject Jesus, and Jesus does not generalize his condemning pronouncements. Rather, the “replacement” going on is that of the leadership and the Temple with the disciples and the church. This helps us understand the “whatever you ask in prayer” comment in 21:22. “Whatever” is qualified by the context of the previous verse which is an imprecatory comment on the temple (note Jesus says “this mountain” as he stands in Mount Zion’s shadow): the church is guaranteed to receive whatever is asked in relation to the new temple’s mission in being a beacon to the idolatrous nations to come to the true and living God.

It is these very strengths, however, that lead me to a couple questions that seem to go unaddressed. How is Israel Israel? That is, Konradt claims that “a process of differentiation [is] taking place within Israel … [that] continues through the persistent task of the mission to Israel” (p. 264). Moreover, “the destruction of Jerusalem becomes a warning that those who set themselves against Jesus and his ecclesia will have to face eschatological punishment” (ibid.). But Konradt also says it is a “mistaken conclusion that non-Christ-believing Judaism is no longer ‘Israel’” (p. 345). How then are “those that set themselves against Jesus and his ecclesia” still a part of Israel? Simply insofar as they receive the preaching of the kingdom first? Is that enough? This tension in the thesis seems unresolved.

On the other hand, Konradt states that “Jesus’ people (ὁ λαὸς αὐτου) and his Church (μου ἡ ἐκκλησία) are not identical” (p. 344), and the ecclesia “has emerged (and is still emerging) from Israel and the (other) nations” (p. 353). But “the nations will be added to the λαός” (p. 275) as “Gentiles join Israel insofar as they are incorporated into the children of Abraham” (p. 321). How are these concepts reconciled (since “it is ultimately insufficient to … conceive of the ecclesia as a special messianic group within Israel”; p. 349)? Do the nations come into Israel through the salvific work of Israel’s messiah? Or is the church an entirely separate entity that has grown out of Israel? That “Israel and the ecclesia are situated on different soteriological levels” (p. 344) seems confusing in light of Konradt’s insistence that Jesus’s missions to Israel and the rest of the world are actually one and the same.

Such questions notwithstanding, Konradt’s thesis is very strong and the English-reading world is fortunate to have this recent translation.