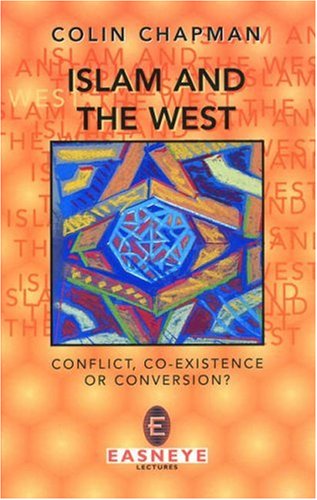 Islam and the West: Conflict, Co-existence or Conversion?

This book is an expansion of four Easneye lectures on missiology given at All Nations Christian College. The result, while inevitably somewhat piecemeal, is highly informative. In the course of each chapter some of the best specialist literature by Muslims, Christians and others on any given topic is analysed with admirable insight, the resulting subtlety of thought being combined with exceptionally clear presentation.

After the almost obligatory exploration of diverse definitions of ‘Islam’ and ‘the West’, the author stresses the need to listen to each others’ interpretations of history in order to truly understand the other. There follow two chapters exploring Islamic mission to non-Muslims past and present. Chapman argues that in the past the creation of a total Islamic environment, comprising dominance of social institutions, was a more influential factor in conversion than coercion, although this also occurred. Widespread conversion to Islam in the contemporary West is therefore unlikely because of the difficulty of creating such an environment. The next chapter follows offers a critical historical survey of different Christian approaches to theological discussion and debate with Muslims.

Three issues of wider public concern are then addressed, all illustrating Chapman’s point that ‘dialogue doesn’t have to be about theology at all’ (109). These are human rights, education and the debate over the establishment of the Church of England. The discussion of human rights challenges both Muslim and Christian readers. The author examines changing Christian attitudes to human rights and explores Islamic law, at times critically. The key contention is that human rights and Islam are not necessarily mutually exclusive. Not everything done in the name of Islam is Islamic, often being motivated instead by the political agendas of ruling elites. As for education, Chapman believes that there is no legal reason to deny Muslims state-funded schools. Regarding the future of church establishment in a society of many faiths, he endorses a middle way.

While the Church of England should share some privileges it can justifiably retain a degree of primacy, at least in the immediate future. If the book has an underlying thesis, it is perhaps found in the concluding chapter. This presents reasons for guarded optimism that conditions are ripe for more constructive relations between Islam and the West.

Occasionally I wanted further clarification. On page 1 the term ‘conversion’ is used to denote not only a change of beliefs but also the possibility that, for example ‘Islam might somehow be changed through its contact with the West’. Yet elsewhere Chapman draws a distinction between conversion and ‘significant changes of attitude’ (194). Discussing education, he outlines a number of values that he suggests people of any faith or none could affirm. One of these is equality (168), but his preceding treatment of human rights argues that many interpreters of Islamic law cannot accept the equal legal status of certain groups. Does this attitude to equality disappear completely in the sphere of education, and if so, as Chapman presumably thinks, why?

These are minor caveats amidst a wealth of excellent material. The author hopes that his book, ‘may suggest a kind of framework within which this kind of exploration can be continued, ideally with Christians and Muslims working together’ (3). His own exploration is unafraid of addressing awkward issues, yet willing to make the effort genuinely to understand another’s position. Chapman’s book will significantly help to develop its reader’s thinking beyond the exchange of misinformation that can so easily mar discussion of Islam and the West.