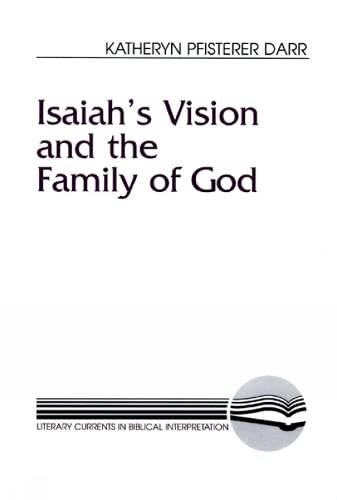 In a series aimed at encouraging ‘original readings that breach the confines of traditional biblical criticism’, Katheryn P. Darr offers a reader-oriented approach to the Isaiah scroll. Darr shares with an increasing number of scholars an interest in the literary unity of the book of Isaiah (without implying unity of authorship), and an interest in the persuasive force of language. Her study is a valuable contribution to both fields of research.

In Chapter 1 the author outlines her methodological approach, which tries to do justice to the creative role of the reader in constructing meaning as well as to the intentionality of the text itself. The critic’s task is accordingly to reconstruct a ‘text-specific’ reader. Darr’s reader of Isaiah’s vision is a scribe or religious leader at the beginning of the fourth century, the time she assumes the book was completed, who reads the scroll as the vision of the eight-century prophet Isaiah. The prophet is thereby perceived as addressing different communities even far beyond his lifetime as the vision unfolds.

After a useful introduction to contemporary theory about metaphor, the first chapter also outlines Darr’s understanding of the function of metaphor. She highlights that metaphor aims at reader participation and persuasion, and stresses that in determining a metaphor’s meaning, author and context must be considered.

Chapter 2 examines the meaning and function of child imagery in the Isaiah scroll, after having explored carefully ancient Israel’s commonplaces associated with children. The depiction of Israel as God’s rebellious children emerges as a key element in Isaiah’s ‘rhetoric of rebellion’.

Chapter 3 is concerned with Isaiah’s figurative references to women and proceeds in the same way as Chapter 2. Darr concludes that Isaiah exploits existing commonplaces concerning ‘the ways women are’ for strategic ends.

Chapters 4 and 5 trace the fates of Jerusalem and her rival cities in Yahweh’s plan. Apart from discussing the pertaining texts in Isaiah 1–39 (ch. 4) and 40–66 (ch. 5), Darr also offers balanced and informed treatments of topics such as ‘cities as females’ and ‘the city lament genre’.

Drawing on comparative extrabiblical texts, Chapter 6 is dedicated to a highly illuminating study of the meaning and function of King Hezekiah’s proverb, ‘Babes are positioned for birth, but there is no strength to deliver’ (37:3b). This leads then to an examination of two more Isaian texts concerned with the ‘(in)ability-to-bring-to-birth’ (26:18; 66:7–9). The three texts are seen as contributing to ‘the reader’s construal of Isaiah as a coherent literary work’ (p. 217). The book ends with a short conclusion, 13 pages of bibliography and indices of authors and biblical references.

Darr’s claim that figurative language ‘accomplishes both informative and performative functions’ (p. 43) is one which could well be made for her own book. It conveys information, but it is also an eye-opener. I will certainly read Isaiah’s vision with a new and deepened appreciation for its child and female imagery. Darr’s study demonstrates that attention to this imagery contributes significantly to our understanding of Isaiah’s vision as a whole, a vision which justifies Yahweh’s divorce from Lady Zion on account of her rebellious children and (later) her own rebelliousness and anticipates a great family reunion. I have only two quibbles: first, the ‘real’ woman and children in chapters 7–8 merit more attention, even if they fall outside the scope of Darr’s study proper. Secondly, the assumption that a scribe reads the book just after its completion as if it had been written some 300 years ago is not particularly convincing.