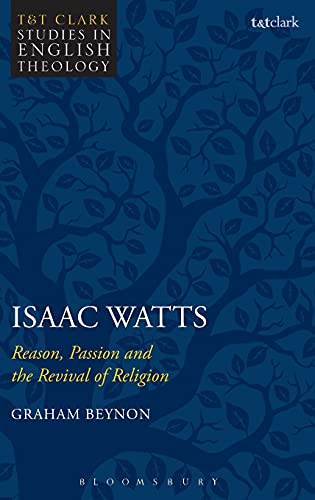 Isaac Watts: Reason, Passion and the Revival of Religion

Isaac Watts has been an important, though elusive, influence in the life of the reviewer. In Canadian growing up years, I came to associate Watts’s paraphrase, “Our God, Our Help in Ages Past” with civic assemblies held on the 11th of November. At a later stage, I can recall the thrill of joining in to sing his “We Give Immortal Praise to God the Father’s Love” (a hymn to the Trinity). So much from Watts is now lodged in the memory! But what of Isaac Watts (1674–1748), the man, the pastor-preacher, and the theologian? This question leads to a challenge for us: apart from his verses, Watts is largely unknown today.

Graham Beynon was once in this position until he read David Fountain’s compact biography, Isaac Watts Remembered (Southampton: Mayflower, 1974), while on holiday. We now have the impressive results of the quest generated by that reading: a published St Andrews dissertation (first released in cloth covers in 2016), which explores Watts in his cultural and theological setting. A biography it is not. To profit from it, a reader will, like Beynon, need to begin with an existing biography.

What we do have here is a fascinating investigation of Watts, considered as an heir of the ejected Nonconformists of 1662 in the early Enlightenment period. Beynon’s work joins a growing list of studies of Christian leaders who led Protestant Nonconformity into the eighteenth century. One thinks here of David Fields’s Rigide Calvinisme in a Softer Dresse: The Moderate Presbyterianism of John Howe, 1630–1705 (Edinburgh: Rutherford House, 2004), Dewey Wallace’s Shapers of English Calvinism, 1660–1714: Variety, Persistence, and Transformation (Oxford: Oxford University Press, 2011), and Robert Strivens’s Philip Doddridge and the Shaping of Evangelical Dissent (London: Routledge, 2015). Whether Presbyterian or Congregationalist, these Christian leaders (with Watts) aimed to defend the legitimacy of Protestant Nonconformity against suspicions of an exaggerated “enthusiasm.” This tendency towards religious subjectivism was popularly believed to have contributed to earlier civil war and regicide. Yet, they also aimed to speak and write in a nuanced way in a changed intellectual climate. This climate increasingly extolled the capabilities of human reason in a way that subtracted from the primacy formerly awarded to divine revelation.

If Watts can fairly be considered an heir of the Puritans ejected in 1662, the question must still be asked, “Was he a faithful heir?” One of the strengths of Beynon’s analysis—conducted with methodological rigor—is his survey of the variety of answers to this important question. Earlier appraisers have considered Watts as (1) a rebel against his Puritan heritage who proceeded to undermine it, (2) a moderating influence upon a Puritan heritage needing to be shorn of emphases he reckoned extreme, and (3) a reconciler who synthesized elements of distinguishable systems of thought.

Having surveyed Watts’s writings on the themes of reason’s role, the place of the passions in religious psychology, and the importance of the clear expression of ideas through words in sermons, songs, and prayers, Beynon’s verdict is that Watts represented a “modified Puritanism” or “an Enlightenment Puritanism” (p. 192). This involved an intentional synthesis of elements of the old and the new. “He believed that there was a clear way ahead that combined the best of Puritan and Enlightenment thought. Indeed, he thought that this path led to the revival of religion and not simply the preserving of it” (p. 197).

Accordingly, we do not find Beynon making major criticisms of Watts. We do find him acknowledging that Watts was at times tentative when he needed to be more definite, and overly optimistic that some mediating positions (for example, on the Trinity) would prove satisfactory (p. 198).

The importance of Beynon’s study (and others like it) can hardly be exaggerated. Two concerns are paramount. First, for the past sixty years, conservative evangelicalism has been pointed towards the Puritan era as the period providing us with the best models for proclamation and theology. That “retro” directive is undiminished. The reviewer (like many readers) has just been urged to acquire the reprinted Works of William Perkins (1558–1602). The impression created by this fixation on the Puritan age is that those (such as Howe, Watts, and Doddridge) who restated the faith in a changing climate need not have bothered. Beynon shows us that unlike many of their contemporaries who were content to keep to the “old paths,” Watts and others like him engaged in a necessary theological re-statement and produced a meaningful apologetic in a time of cultural flux.

Second, conservative evangelicalism today is cultivating a “persona” of hipness, which gives no particular pride of place to the clarity of thought and speech. Instead, it exalts the spontaneous and the impromptu. Watts stands as a shining example of one who aimed to preach, write hymn lyrics, and pray, communicating clear ideas in clear words.

Thank you, Graham Beynon, for a timely study!