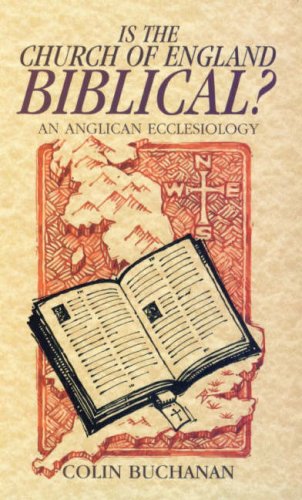 Is the Church of England Biblical? An Anglican Ecclesiology

Evangelicals in the Church of England have often been accused of lacking an adequate ecclesiology: this is a major response to that charge. Bishop Buchanan is well placed to offer astute comment having been both a lecturer and a participant in many of the Anglican ecclesiological discussions of the past 40 years.

Buchanan writes as an evangelical primarily for evangelicals. He places this book between two other recent publications: Kevin Giles’ What on Earth is the Church? (SPCK, 1995), which is largely biblical; and Tim Bradshaw’s The Olive Branch (Paternoster, 1992) which is more doctrinal and focuses on twentieth century ecclesiology. This book seeks to combine the two emphases. With the recognition that an Anglican ecclesiology needs to be Biblical, Part I of the book covers ‘Biblical Data’. He then covers historical matters in Part II, ‘The Early Church’, and much of Part III, ‘The Church of England Then and Now’, which begins with the events of the Reformation. Here, the biblical principles are applied to the Church of England of today. There is also much interesting material in the Appendices and Notes of Part IV, including lengthy comments on ‘Establishment’, ‘Episcopacy’ and the ‘Anglican Communion’.

Buchanan is often highly critical in his assessment of the contemporary Church of England in the light of the Scriptural witness, and he also has many thought-provoking challenges for evangelicals. To mention just one of many: a leading theme is the importance of the geographical principle of church organisation and the need to return to the New Testament model of a single church for an area, rather than competing denominations. This emphasis on the unity of the visible church is also linked to a ‘higher’ doctrine of the sacraments than is usual for evangelicals. Indeed there are few aspects of ecclecsiology that Buchanan does not touch on with clarity, and often originality. There are also many practical suggestions for reform.

In terms of the Anglican debate, Buchanan places himself firmly in the line of, what he calls the ‘ecclesiologists’ who committed themselves at the 1967 Keele conference to work within the Church of England as it is. He contrasts this with the ‘constitutionalists’ (a succinct statement of which is found in J.I. Packer’s A Kind of Noah’s Ark) who looked back to the church as it was defined by its foundation documents. However, I wonder if his understanding of truth as an eschatological ideal we move towards, as well as a Biblical deposit we return to, gives a greater contentment to live with the current plurality than some evangelicals would be happy with.

This book is engagingly written. It is described as ‘intermediate scholarship’ with the aim of introducing a wide audience to a rarely discussed area. There are few endnotes and little direct engagement with secondary sources, although it is clear he has read widely. In his ‘Introduction’ he notes that his return to Episcopal office significantly reduced the time he had to write this book. There is a consequent sense of material having been rather thrown together at points. This is therefore not perhaps a definitive statement, but it is a stimulating call to further reflection and contemporary biblical faithfulness. While the focus is on the Church of England, and assumes a certain knowledge of its workings, there is much material of wider interest. There is nothing comparable on the market.