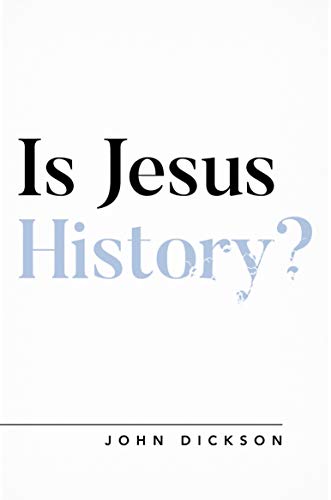 John Dickson is one of the few scholars who writes about contemporary historical Jesus scholarship in a down-to-earth, engaging manner. His recent book, Is Jesus History?, not only answers the most pressing historical questions raised by skeptics about Jesus and the New Testament; Dickson also shows how historians (both Christian and secular) analyze and assess ancient figures and sources.

The first three chapters address the question “Did Jesus exist?” Recent atheist literature gives the impression that Jesus’s existence is questionable and that the Gospels are mostly fabrications. Dickson explains how history is done, how historians study Jesus, and the difficulty of claiming Jesus never existed. He highlights two points. First, the study of the historical Jesus is a vast secular discipline found in major universities around the world conducted by scholars with varied religious convictions. With such a diverse group subject to the peer review process, no scholar could produce biased or fraudulent scholarship about Jesus’s existence.

Second, after centuries of applying rigorous historical methodology to the man from Nazareth, scholars know more now about Jesus than when the quest for the historical Jesus began. Scholars are in fact less skeptical about Jesus, not more. Dickson quotes E. P. Sanders as representative of secular experts in the field. Sanders writes, “There are no substantial doubts about the general course of Jesus’ life: when and where he lived, approximately when and where he died, and the sort of things that he did during his public activity” (p. 19).

The claim that Jesus never existed, Dickson maintains, “has virtually no currency in contemporary scholarship” (p. 39). No reputable scholar entertains the notion. If anyone doubts this, Dickson suggests they glance at any academic article on the historical Jesus published in one of the major reference works housed in any secular university where the historical Jesus is seriously studied.

To underscore his point, Dickson issued a playful challenge years ago on ABC (Australia) that still has not been met. He would eat a page of his Bible if anyone finds a single full professor of Ancient History, Classics, or New Testament in any university in the world who doesn’t believe Jesus lived (pp. 34–35). Lacking such a professor doesn’t prove the existence of Jesus, but Dickson believes such “an obvious consensus of scholarship that places Jesus’ existence beyond doubt must count for something, not everything, but something” (p. 39, emphasis original).

Chapter 4 surveys how secular academia have studied Jesus over the past two centuries and today. It distinguishes three “quests” in historical Jesus scholarship. The vast majority of scholars today, “third-questers,” approach Jesus as ancient historians approach other figures contemporary with Jesus. The rest of the book presents key findings of the third quest and their significance.

One key finding is that third questers confidently say the central elements of Jesus’ life fit with what is known about life in first-century Galilee and Judaea (ch. 5). A second finding concerns how the New Testament compares with other ancient writings (ch. 6). Historians employ three basic tests: When were they written? What earlier sources did the authors use? How well preserved are the manuscripts? Dickson then shows how the Gospels and Paul’s letters compare favorably with the writings about Alexander the Great.

Fourth, Paul’s writings provide valuable historical information about Jesus (ch. 8). They were composed within twenty years of Jesus’s death. By historical standards, this is exceptional. Also, Paul makes numerous passing references to things Jesus said and did, perhaps over twenty historical details. Paul seemingly presume his readers know about the things he describes. Such familiarity is evidence that the events of Jesus’s life circulated for years through what scholars call “oral tradition.” Paul’s gospel summary in 1 Cor. 15:1–5 is an example of oral tradition, which historians believe formed within the first months or years after the events themselves. Dickson captures the significance of this early summary: “This is as close to the events themselves as a historian could hope for” (p. 113).

Fifth, archaeology plays a vital role in historical Jesus research (ch. 9). Several discoveries confirm details mentioned in the Gospels. Its greater value, Dickson underscores, is in validating the cultural realities of first-century Galilee and Judaea as portrayed in the Gospels. The archaeological evidence leaves little doubt that this region was thoroughly Jewish.

Finally, Dickson examines evidence for the resurrection (ch. 10). Historians regard it as a genuine puzzle. They concede the testimony about the resurrection is early, widespread, and credible. Hardly any scholar doubts the tomb was empty. Men and women sincerely thought they saw Jesus alive. Historians dismiss common naturalistic explanations (e.g., disciples stole the body, Jesus didn’t really die, women went to the wrong tomb). Even in the face of such credible testimony, they remain agnostic on the matter. Dickson quotes E. P. Sanders as one speaking on behalf of many: “That Jesus’ followers (and later Paul) had resurrection experiences is, in my judgment, a fact. What the reality was that gave rise to the experiences, I do not know” (p. 143).

Such agnosticism is not for lack of historical evidence. It’s not really a historical problem; it’s philosophical and personal. It involves one’s background beliefs about the universe, life experiences, and personal preferences. So, Dickson concludes this chapter with a gentle challenge: “I would say that the evidence for the resurrection is good enough to warrant skeptical readers picking up one of the Gospels and studying it with an open mind—and, dare I say, an open heart—attuned to the possibility that the figure described in these ancient sources is not only unique but potentially life-changing” (p. 144). Dickson’s book certainly has the potential to open many doubting minds. For this reason, I highly commend it.