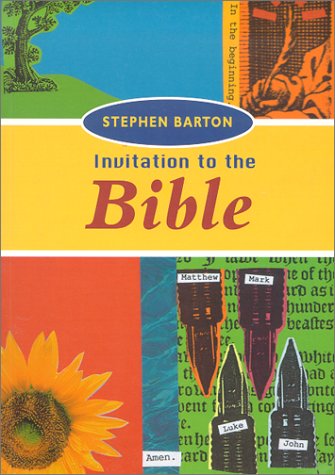 Invitation to the Bible

Until recent times it has been generally accepted in Christian theology that because the Bible Was inspired by God and is therefore God’s word to us it follows that it carries absolute and unquestionable authority. However, the increasing emphasis on individual autonomy that has been a feature of Western thought since the enlightenment has led to a widespread reluctance to accept traditional sources of authority when they conflict with people’s own individual convictions about what is right and wrong. The Bible has not been exempt from this development of thought, and as a result its authority has also been called into question.

It is this situation which is the starting point for Stephen Barton’s Invitation to the Bible, which began life as module on the interpretation and use of the Bible for the former Aston training scheme in the Church of England. He notes that biblical texts such as the repudiation of homosexuality in Lev 18:22 or Jesus’ call for the renunciation of family ties in Lk 14:26 leads some people to:

… respond to the Bible as if it is a type of hate-mail. Instead of considering the possibility that such ‘hard’ tests might be an invitation to look more closely for a deeper meaning able to be located in a wider context of religious faith and practice, they can only see them as the hate-mail of a malicious and vengeful God.

Dr Barton’s answer to the question of how we can read that Bible so that it speaks to us not as hate mail, but a ‘love letter’ from God, is that we need to read it in a way that is rooted in love for the triune God of whom the Bible speaks, is shaped by the orthodox theological tradition, and takes place in the context of the life of the Christian community.

This basic thesis of Dr Barton’s is a sound one, and in fact represents the way of reading the Bible which has normally been accepted in the Church since the controversies with the Gnostics back in the second century. He is also, I think, correct to stress that we must take the genre of the Biblical texts into account in order to interpret them properly, and what he has to say about the meaning of particular texts, as in his account of the legislation regarding the Sabbath in chapter four, or his overview of I Corinthians in chapter nine, is often helpful and illuminating.

However, this having been said, I think that there are a number of important problems with the details of his approach to the Biblical material.

Firstly, I think he is wrong historically in what he says about the concept of Biblical infallibility being a nineteenth century Protestant invention (it is in fact the view of the Bible accepted by all shades of Christian opinion until very recent times), and in his assertion that 2 Tim 3:16 does not point us towards this idea.

Secondly, I think he accepts too readily the conventional critical view of the Bible, as in his description of the fall narrative as ‘myth’ in chapter four, and his scepticism in chapters five and six concerning the detailed historical accuracy of the Gospels, and the possibility of harmonising their accounts of Jesus’ life and ministry.

Thirdly, I didn’t feel that he gave enough weight to the principle that Scripture itself is its own best interpreter. For example, in chapter three he argues that the unity of the Old and New Testaments is a judgement of faith made by the Church rather than something which can be learned from the Bible itself, and in chapter four he rejects the normative nature of the interpretation of the fall narrative in Genesis 3 given in 1 Tim 2:14.

Overall, I think this is a book that is worth reading, both for the good points it contains, and also as a stimulus to further thought about the issues he raises. However, for the reasons noted above, I would not recommend it as a basic text for those wanting a reliable guide to reading the Bible. I would recommend them to look instead at G.D. Fee and D. Stuart How to read the Bible for all its worth (Zondervan 1981).