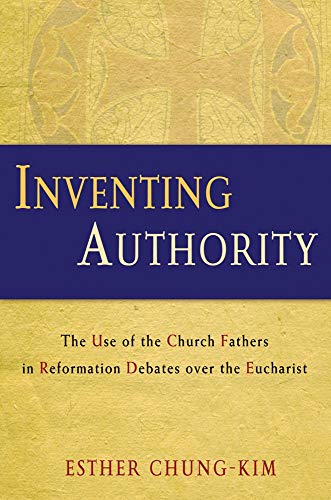 In her book Inventing Authority, Esther Chung-Kim takes on the formidable task of documenting the use of patristic sources by Lutheran and Reformed theologians in the sixteenth-century battles over Eucharistic doctrine. Examining thousands of pages of various treatises and the records of two major colloquies, she detects familiar patterns of argument over several key issues. Her conclusions prove to be illuminating on several fronts, while at the same time failing to provide a contribution to understanding positive ways the patristic fathers might have offered validity to Lutheran and Reformed positions.

Chung-Kim sets the stage for the controversy in chapter 1 with an analysis of what happened at Marburg in 1529 when the growing differences between Luther and the Swiss reformers culminated in a painful fracture in the young Reformation movement. Despite both sides claiming that Scripture supported their position, no agreement could be reached over the interpretation of Christ’s words “This is my Body.” Since the debate centered on the interpretation of Scripture, both sides by necessity turned to the historical interpretation of these passages by the church fathers to lend authority to their position. Differences over how to interpret Christ’s dominical words in Scripture then descended into differences of opinion over how to interpret the statements of the church fathers over these same passages.

Chung-Kim charts the progress of these debates throughout the ensuing decades of the sixteenth century. The two main sources of disagreement are (1) the mode of Christ’s presence and (2) the nature of “unworthily partaking” by unbelievers. But first she examines the significance of the entrance of John Calvin into the fray in chapter 2. She successfully delineates Calvin’s position from Zwingli’s, while charting Calvin’s increasing use of citations from the church fathers in his successive editions of the Institutes and his biblical commentaries. Calvin cited patristic sources, especially Augustine, to build his case against not only Luther and the medieval Catholics, but also Zwingli. Calvin did not agree with transubstantiation or Luther’s consubstantiation, but he also had little use for Zwingli’s empty signs. Whether Calvin fairly appropriates Augustine’s semiotics in his unique understanding of the sacramental union of a sign with that which it signified, Chung-Kim does not venture an opinion. Rather she dwells on the ways in which she thinks Calvin uses Augustine and other patristic writers with little regard for the context in which they were writing. According to Chung-Kim, Calvin cares little if he quotes a patristic writer out of context or only partially divulges the text of a passage if it suits his argument. Or, worse yet, Calvin will set up “an image of a common ancient doctrine even when he knows it did not exist” (p. 76).

The Lutherans do not fare any better in her account. Chapters 3 and 4 describe the battle over patristic sources between Calvin and Joachim Westphal from 1555–1558; chapter 5 presents the debate between Calvin and Tilemann Hesshusen between 1560–1561, and chapter 6 reports on the debate between Theodore Beza and Jacob Andrae at the Colloquy of Montbéliard in 1586. The Lutherans scale the heights when it comes to finding quotations from the church fathers to support their position and enlist an army to do so: Cyril, Chrysostom, Ambrose, Gregory Nazianzus, Hillary, and Basil, to name just a few. The documentation is extensive as Chung-Kim does a remarkable job of summarizing the arguments in treatise after treatise of both Calvin and the Lutherans and the ways in which they quoted the church fathers to prove their point. She points out the various tactics each side uses: comparing opponents with a figure denounced by the early church, highlighting the “bad” arguments of a figure such as Origen and how their opponent’s view is similar, dismissing the opponent’s quotations as out of context or irrelevant, and on it goes. Further, Chung-Kim is quite correct in maintaining that the Lutherans confuse Calvin’s theology with Zwingli’s. Contrary to Zwingli, Calvin believed in the true presence of Christ in the Eucharistic elements; he just disagreed with the Lutherans over how Christ is present. Thus while we are not sure if Calvin really understands the church fathers any better than the Lutherans, we do know for sure that the Lutherans didn’t understand Calvin.

It is true that the church fathers “are centuries removed from the sixteenth-century eucharistic debates” (p. 96) and therefore the reformers might have exercised much more care in contextualizing patristic arguments against their own. But Chung-Kim’s analysis begs the question: did anyone get the church fathers right? Early on we get the idea that hurling patristic texts back and forth didn’t change anyone’s mind. So rather than investing the entirety of her project in summarizing treatises which contained repetitive arguments and lines of argumentation, it might have been more helpful to engage in one or two specific case studies. When both sides used the same quotation to prove their point, a closer read of the text the quotation was lifted from might have provided some insight into the larger issues of the Eucharistic debate itself. For example, Christology played an important role in Eucharistic doctrine for both the church fathers and the reformers. In that sense, their questions were not necessarily separated by centuries.

Nonetheless, Chung-Kim’s work is very helpful in demonstrating the uncompromising entrenchment of the Lutherans and Reformed in the Eucharistic debate. That both sides appeared to “invent” patristic authority to maintain these differences casts a different light indeed on a movement that championed sola Scriptura.