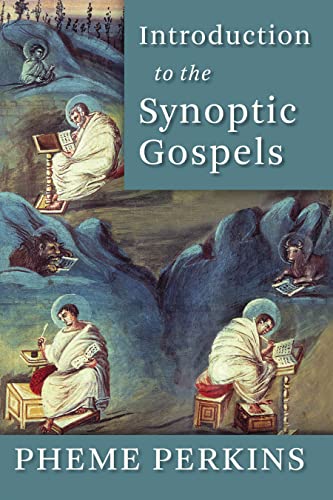 Introduction to the Synoptic Gospels

Introduction to the Synoptic Gospels is an engaging and accessible volume written for the general reader. All the while, Perkins, professor of NT in the theology department at Boston College, does not shy away from attending to scholarly methods by “explaining the what and why of the methods used by scholars when we approach the Gospels” (p. xiv).

Chapter 1, “What Is a Gospel” (pp. 1–30), addresses the question of genre, surveying the use of “gospel” in secular literature and its appropriation in Christian tradition for the “deeds of salvation in Jesus Christ” (p. 1). Perkins identifies the gospels in the genre of “life” or biography, importantly clarifying that this is in a decidedly ancient rather than modern sense, but also illustrating its differences from Greco-Roman bioi of antiquity.

Chapter 2, “Books and Believers in Early Christianity” (pp. 31–53), begins by discussing literacy rates in antiquity and the importance of the written word for Judaism and Christianity. Here Perkins explores the way in which books were created, copied, and preserved in the early centuries. Chapter 3, “The Quest for Sources,” is by far the longest chapter in the book (pp. 54–125). Beginning with Luke’s preface, the author elucidates the importance of recognizing gospel sources, introducing readers to a synopsis to illustrate differences. Importantly, she shows that Q is decidedly not a gospel; it lacks narrative and mention of the death/resurrection of Jesus (p. 86).

The next chapters cover each of the Synoptics: “Reading Mark’s Gospel” (pp. 126–63), “Reading Matthew’s Gospel” (pp. 164–201), and “Reading Luke’s Gospel” (pp. 202–53). Each of these chapters provide a narrative summary of the book’s shape, analysis of its literary features and characters, its presentation of Jesus, a profile of the “Community Implied” in the gospel, and issues particular to that gospel. For Mark, these are the ending(s) of Mark, and the so-called “secret version.” Matthew’s chapter addresses “Jewish Christian Gospel Traditions.” Finally, for Luke, Perkins analyzes various Mary traditions and other “infancy gospels,” as well as the “reception and revision” of the third gospel. It should be noted that the author’s discussion of the “community implied” in each gospel speaks more to its intended reader than it expresses an outgrowth of the so-called Community hypothesis.

The final chapter, “Gospels from the Second and Third Centuries” (pp. 254–93), discusses the various oral and written Jesus traditions and their similarities to and distinctions from the Synoptics, specifically with respect to second- and third-century Gnostic Gospels. Perkins concludes that despite some striking similarities and overlap of material between apocryphal and canonical gospels, the latter received their status in history because of their antiquity and origin in the apostolic generation “that none of the second-century attempts at revising, expanding, or changing the story could” (p. 292).

This book is far-reaching in its scope. Perkins’s expertise is highlighted by the clarity and accessibility with which this book is written. There are many points of engagement, but we can address only a few. First, Perkins affirms that early believers “read from a more extensive collection of sacred writings than one finds in the canon” (p. 36), but does not clarify how widely read the apocryphal gospels were. This may give the reader the impression that these texts were widely held as authoritative and heavily in use in early Christian communities. Her statement that “ancient biography is much less complex than its modern counterpart” (p. 9) may require some explanation. Bioi, as Burridge points out, exhibit a high degree of complexity, as Perkins herself ably demonstrates. Perhaps more constructive would be what she illustrated so well: it is significantly different from modern biography. Furthermore, Perkins says that “the Evangelists employed their knowledge of Scripture to supplement traditions about Jesus’ life and death” (p. 7). This is true enough, but in what sense do they “supplement”?

My main criticism reflects more my own biases than Perkins’s shortcomings. Specifically, attention to the OT and Second Temple literary, historical, and theological milieu could potentially help readers engage the text of the Synoptics more constructively than Perkins’s extended discussions of the apocryphal gospels. Yet all these remarks really underscore the contribution of Perkins’s work for the general reader. This book is ripe for developing critical thinking skills in the general reader. Infrequent are Perkins’s adoption of critical positions without clearly explaining why they are held. Though readers should read some portions of the book with a critical eye, such is no less true for any good work of secondary literature. Her scholarship is current, and sensationalist conspiracy theories are dismissed. That she is able to distill centuries of scholarship into a constructive, readable work that is both accurate and informative is a tribute to the abilities and expertise of the author. The only comparable book that comes to mind is Craig Blomberg’s Jesus and the Gospels: An Introduction and Survey (Nashville: Broadman & Holman, 1997), which also includes John and other critical issues and is decidedly addressed to the interests of (primarily North American) evangelicals.