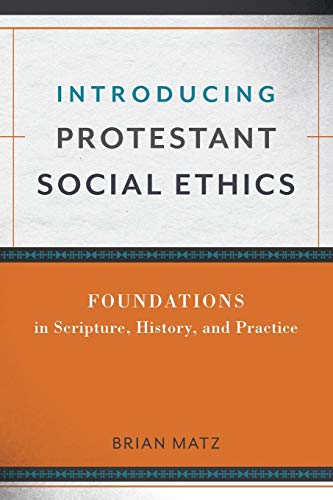 Introducing Protestant Social Ethics represents a culmination of Dr. Brian Matz’s teaching and research on social ethics at Fontbonne University, Carroll College, Seattle University, and the Katholieke Universiteit Leuven. Indeed, such a description offers an essential insight into the organization and tone of this work. Namely, it is clear the content of this work represents the collection of Matz’s pedagogical and research expertise engaging the breadth and scope of social ethics. Matz seeks to improve Protestant social ethics while also situating any suggestions within the larger discipline of social ethics (p. xvi), an admirable and ambitions goal. After offering a brief survey, several points of discussion warrant specific attention here.

Section two moves from Scripture to Christian history, picking up from the early church and moving into late antiquity, through the Middle Ages, Reformations era, Post-Reformations era, and contemporary Catholic social ethics. In these chapters, Matz seeks to more clearly situate Protestant social ethics within the larger Christian tradition. Through an analysis of the history of social ethics from the early church through modern Roman Catholic social thought, Matz traces the path of Christian social thought through history while noting particularly important contributions from each era (e.g., wealth, usury, poverty, political engagement, etc.).

Finally, section three develops five key principles in social ethics: human dignity, common good, justice, solidarity, and subsidiary. Each chapter defines each term, summarizes the biblical and theological basis for each term, and illustrates each term through a unique case study. Matz points back to exegesis from part one and significant figures developed in part two as a means of explaining and rooting section three within the larger flow of Introducing Protestant Social Ethics.

While titled as an introduction to Protestant social ethics, such a naming misrepresents the overall structure of this work. Certainly, Matz includes analysis of the ethics of Martin Luther, John Calvin, and other prominent Protestant theologians in section two of this work. However, to position this book as an introduction to a distinctly Protestant vision of social ethics misleads the reader, misrepresenting the thorough and helpful content found within.

Of specific interest to this point, Matz does state an emphasis on Scripture and two-kingdom theology (p. xvi) as the distinct contributions of Protestants to social ethics but does so without citations or without referencing any of the other defining principles of the European Reformations even as he offers a historical review of this period (pp. 96–113). In contrast to Matz, Protestant theologians historically point to more than sola Scriptura as a defining principle in Protestant thought. Sola Sciptura stands alongside sola fide, sola gratia, solus Christus, and soli Deo gloria as defining principles of Protestantism and Protestant social ethics. It is impossible to fully appreciate a Protestant vision of human dignity, the common good, or any other social principle without addressing their direct connection to fundamental Reformation principles. Any given thread in the tapestry of Reformation commitments cannot be pulled loose without distorting the larger theological, social, and moral vision.

Despite these points of improvement, Matz successfully develops a sweeping and helpful introduction to Christian social ethics as a discipline. As a matter of fact, much of Matz’s work wonderfully integrates biblical, theological, situational, and philosophical concerns. At this point, Matz deserves much credit as he points to the importance of crafting a distinctly Christian social ethic rather than reinforcing social ethics divided along distinctly Protestant or Roman Catholic theologies (pp. xvi–xvii, 153–54). If given a clearer recognition and explanation of Matz’s actual contributions to a unified Protestant and Catholic moral vision, this book could serve as an insightful handbook treating the biblical, historical, and practical concerns of practicing Christian morality in contemporary society. As well, Matz’s work might also facilitate further conversations to develop Christian unity on social, cultural, and political concerns in an era of increased marginalization and cultural pressures.

Overall, Introducing Protestant Social Ethics offers a timely and helpful introduction to Christian social ethics. Noting the disconnect between the books titling and content as well as the necessary clarifications on Protestantism and two kingdom theology, readers are well served by Matz’s clear expertise and teaching experience. In an era where Christians cannot afford to ignore the social realities of our living faith, Brian Matz provides an important contribution to this conversation.