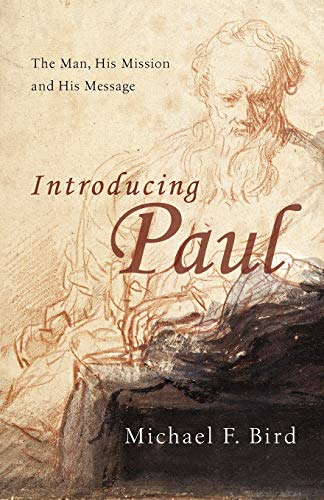 Introducing Paul: The Man, His Mission and His Message

Michael Bird distills many of the current issues in Pauline scholarship for undergraduate students and others who would like a “bird’s eye view” of Paul, as the title of this book’s British version indicates. The book summarizes many of the key issues in Paul’s life and thought. Beginning with an introduction to Paul’s life, he surveys the OT background to Paul’s thought, provides a concise summary of each letter, and then moves to a discussion of some key issues in Pauline theology. Bird devotes two chapters to the Pauline gospel, followed by one chapter each to eschatology, monotheism, and ethics. He concludes with a two-fold summary of Paul’s “spirituality,” arguing that since the center of Paul’s thinking is “the good news of salvation in Christ Jesus,” then the Christian life is one of increasing “gospelization” (p. 162). This process takes two shapes: cruciformity, following Christ to the cross, and anastasity, following Christ in the power of the resurrection.

Although this book is under two hundred pages, Bird has managed to summarize well most of the key issues in Pauline scholarship. He covers the major details of important issues such as the New Perspective on Paul, the imperial cult, the meaning of “righteousness,” inaugurated eschatology, Paul’s view of homosexuals and women, and several other key topics. Moreover, while summarizing the details of these issues, Bird usually presents a good case for his position without getting bogged down in the details that could so easily overwhelm a newcomer to many of these discussions. Bird’s ability to provide clear and thorough summaries without unneeded complexity is perhaps the greatest strength of the book.

Another strength of this work is a good balance between familiar theological topics, such as justification, imputation, and the already and not yet, and topics that might be less familiar to some, such as the Caesar cult and the sometimes neglected renewal theme in Paul’s theology. Finally, this is a very accessible and readable book. Given that Bird’s target audience is laypersons and undergraduate students, he seems to have hit this mark rather well.

While we could, and perhaps should, continue to list other strengths of Bird’s work, I will mention just one place in the book that raised a question in my mind. In his discussion of Paul’s view of women, Bird is happy to affirm both the teaching ministry of women and Paul’s general “patriarchal perspective” (p. 159). Given that this discussion was preceded by a larger treatment of sexual mores, I was surprised that Bird did not give the role of women more attention. A somewhat larger explanation of this issue would have been a welcome addition, especially for many evangelicals who, while having general clarity about sexual ethics, continue to wrestle with the role of women. However, this question is not necessarily a disagreement, but simply an area where further clarity may have helped to sharpen an already fine work.

In short, this book is a valuable and timely contribution. Whether or not one takes issues with some of Bird’s exegesis, the book is a fine introduction to the current shape of Pauline studies. In comparison with another recent introduction to the Pauline epistles by Brevard Childs (The Church’s Guide for Reading Paul: The Canonical Shaping of the Pauline Corpus [Grand Rapids: Eerdmans, 2008]), Bird takes seriously both the history and the theology of the Pauline epistles. Therefore, Introducing Paul would serve as a fine textbook in an undergraduate or seminary course or as a great way for any other student of the Bible to catch up on the current conversation.