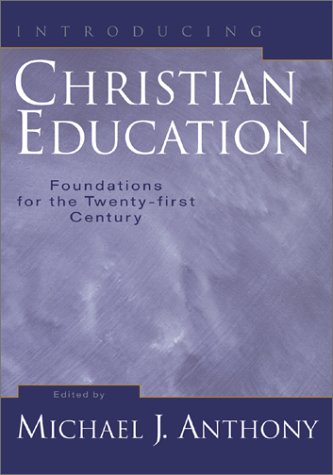 The publishers describe this book as ‘A Complete Christian Education Resource’. The editor says it ‘represents a significant shift in focus from its predecessor Foundations of Ministry: An Introduction to Christian Education for a New Generation. In addition to revisions and updating there are several new chapters for example on singles ministry, Christian schools, and contemporary para-church agencies.

The book applies the concept of Christian Education in a broad way encompassing for example Christian schools, and the teaching of children and adults in churches.

There are 31 contributors, each contributing one chapter. All contributors write from a North American context. One has a post in Canada, the other thirty in USA.

The book is comprehensive but the scope is limited in some ways. For example, chapter 4 ‘Cross-Cultural Perspectives on Christian Education’ is mainly about ethnic diversity as it affects the churches and church schools but not about the wider matter concerning education in a multi-faith society or Christian influence in schools without a Christian foundation. Also, Christian education is described in the Introduction as ‘the process by which those who have experienced a personal spiritual re-birth in their relationship with God partner with the indwelling Holy Spirit to grow in the image of Christ.’ This appears to exclude teaching Christianity to those who do not yet have Christian faith.

The book is limited by relating mostly to the American situation. It utilises American scholarship and there are very few references to British scholars. With so many different contributors some variety of style is inevitable. In addition, some chapters have an obviously Christian approach, even a strongly biblical focus. This is to be expected in the chapters such as that on ‘Theological Foundations of Christian Education’. Other chapters start by describing the writings and theories of various scholars, and afterwards give comments, sometimes only briefly, from a biblical perspective. This in itself is instructive and suggests that as long as there is interaction between biblical and other material then either methodology can be acceptable from a Christian perspective.

There is a healthy recognition of the authority of Scripture and its normative role in Christian education. There is also a helpful emphasis on growth in the Christian community rather than on individualism. In his chapter ‘Theological Foundations of Christian Education’ Klaus Issler says ‘Christian education programs based on truncated conceptions of “spiritual” maturity designed for isolated individuals will do more harm than good’ (39).

I found the chapters on ‘Faith Development’, ‘Spiritual Formation’ and ‘Jesus: The Master Teacher’ especially helpful but that might be due mainly to my particular interests rather than to any particular significance of those chapters over the others.

I was surprised to find that chapter 5 ‘Evangelism and Discipleship’ does not discuss the differences and tensions between evangelism and education.

However, this is a most useful book. It explores the work of several key thinkers such as John Dewey, James Fowler, Lawrence Kohlberg and Jean ‘. Piaget. The analysis is clear and there are many insightful comments from a Christian perspective. When scholars such as these are considered there is a commendable balance between gleaning what is acceptable and unacceptable from a Christian perspective.