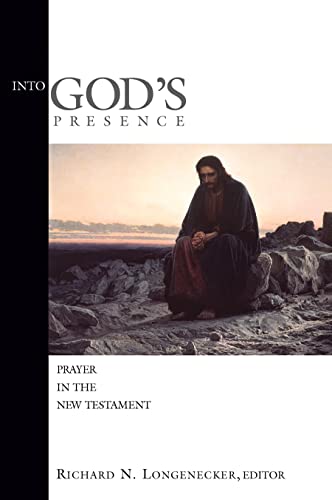 INTO GOD’S PRESENCE: PRAYER IN THE NEW TESTAMENT

Into God’s Presence is a collection of twelve essays by renowned researchers. Divided into three major parts: (I) The Setting, (II) Jesus and the Gospels, and (III) Acts through the Apocalypse, the book offers scholarly insights into the Christian lifeblood—prayer.

C.R. Seitz, D.A. Aune, A. Finkel, and E.M. Schuller introduce the reader to the ancient world of prayer. Seitz shows that prayer in the OT was talking with a living, sovereign God and as such continues in the NT. The activity both inside and outside the covenant had distinct roles, yet was always disclosing God’s identity. Aune studies the Greco-Roman prayers as a means of receiving the gods’ favours in exchange for the worshipper’s sacrifice. He demonstrates that such a concept of reciprocity is foreign to the OT prayer which is based on God’s faithfulness. Finkel looks for a background to Christian prayer in the Second Temple traditions. One might question the legitimacy of reading later Rabbinic material into that historical period, yet, nevertheless, the author presents interesting links between Jesus and post-exilic Judaism. Schuller deals honestly with methodological difficulties in studying fragmentary material of the Dead Sea Scrolls. The examples of prayer in these writings need further examination before final conclusions are reached.

S. Farris, I.H. Marshall, N.T. Wright and A.T. Lincoln approach prayer in the Gospels. Farris analyses the songs of Luke’s infancy narratives in their OT contexts. The praise testifies to the continuity between the Testaments. Thus prayers as part of praise should be expressed within a tradition. Marshall examines Jesus praying in the Synoptic Gospels. This supreme example for the Christian exemplifies praise and thanks to God for his goodness as well as supplication in dependence upon his will. However, the reader will not learn much about fasting in prayer as the issue is easily dismissed by textual criticism. Wright places the Pater Noster within the framework of the new exodus. In its eschatological context, the Lord’s Prayer is not only sharing in the prayer-life of Jesus but also in the divine life itself. It forms a paradigm for Christian living in the presence of the Father. Lincoln studies the Farewell Prayer of John 17. Although Jesus as God did not need to pray, he did so as an example to his followers. Fully identified with their Lord, they experience intimacy with the Father and seek his glory through their prayers. Prayer turns to listening.

J.B. Green, R.N. Longenecker, J.R. Michaels, and R. Bauckham, cover the remainder of the NT. Green presents prayer in Acts as characteristic of faithful discipleship based on Jesus’ model of piety. An element of discontinuity with the OT, however, is prayer to Jesus, God’s co-regent. Another prominent feature is that the Gentiles join God’s people in prayer. Longenecker examines Paul’s prayer-life in comparison with Jewish counterparts. Formal discussions occupy much space and conclude that Rabbinic material provides the background to Paul’s prayers. This is a debatable point. Michaels discovers that intercessory prayer is a common theme in Hebrews and the general epistles. Placing things in the Lord’s hand is the best man can do in his weakness. Bauckham examines three ‘petitionary’ prayers of God’s people in Revelation which seek the coming of God’s just rule on earth in its full eschatological scope. Even disagreeing with Bauckham’s eschatology, one can still learn much of the interdependence of various themes in the book.

In general, the book misses methodological consistency as various scholars approach their area in diverse ways. It can nevertheless provide the reader with much information on Christian prayer and perhaps challenge established views.