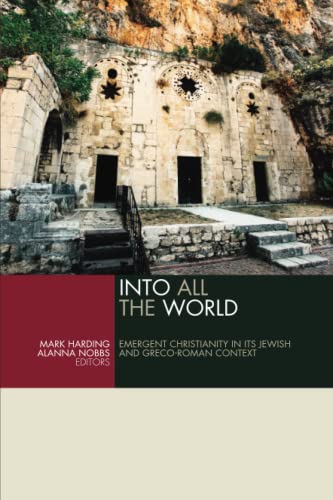 Into All the World: Emergent Christianity in its Jewish and Greco-Roman Context

Into All the World: Emergent Christianity in its Jewish and Greco-Roman Context is the third and final volume in a series edited by Mark Harding and Alanna Nobbs which has “brought together numerous scholars … in Ancient History at Macquarie University working on the Jewish and Greco-Roman background of Early Christianity with those working on similar topics within the Australian College of Theology” (p. 1). The two former volumes dealt with Jesus and the Gospels (The Content and Setting of the Gospel Tradition [Grand Rapids: Eerdmans, 2010]) and Paul and his letters (All Things to All Cultures: Paul Among Jews, Greeks, and Romans [Grand Rapids: Eerdmans, 2013]). The focus of Into All the World is Christianity from Paul through to AD 100. The distinct emphasis of this series has been to consciously bring together the disciplines of ancient history and New Testament studies. This has resulted in an effort by all authors to engage with the full range of sources available to them to consider Christianity in its Jewish and Greco-Roman context.

The book is divided into three sections: “The Spread of Christianity to AD 100”; “Christians Among Jews”; and “Christians Among Romans.” The first section contains four chapters. Chris Forbes considers Acts as an historical source for studying Early Christianity. While identifying some of the difficulties with Acts, he also highlights its sometimes surprising historical precision, and concludes that we must be charitable and yet careful readers of Acts in order to gain everything we can from it. Johan Ferreira demonstrates the missiological character of John’s Gospel and the way it was shaped in order to communicate the story of Jesus to a Greco-Roman audience. Bradley J. Bitner engages with the question of unity and diversity in the Early Church through the lens of the “discourse of discernment” in the General Epistles. In the final chapter of this section, David Starling considers the ethics of the Early Christians through a study of Matthew, Luke-Acts, 1 Corinthians, 1 Peter, and Revelation. He shows their points of contact with Jewish and Greco-Roman ethics, but also the distinct emphases that arise from their foundation in the message of the crucified Lord Jesus.

The second section of Into All the World focuses on the relationship between Christianity and Judaism in the second half of the first century. Paul McKechnie focuses his analysis of Jewish Christianity on Jerusalem, Israel, and Syria, with a particular interest in the first Bishops of Jerusalem and the ministry of Jesus’ relatives. Lydia Gore-Jones and Stephen Llewelyn explore the complexity of the “parting of the ways” between Judaism and Christianity, and how ethnic factors contribute to the churches’ self-identity in relation to the Jewish and Roman communities. Ian K. Smith contends that Hebrews was written to Jewish Christians, who were feeling the pressure of the increasing tensions leading up to the Neronian persecutions in the mid-sixties. His assertions include an interesting contribution to the question regarding the perseverance of the saints in Hebrews. Edward Bridge, explores Christian-Jewish relations in Antioch, and finds that in that city the two communities were more amicable than the Acts record shows of other cities (p. 235).

The final section turns to consider Early Christianity’s relationship with the Roman Empire. Bruce Winter discusses at the imperial cult and demonstrates the inevitable conflict between church and empire due to competing claims of who truly was “Son of God,” “Lord,” and “Saviour.” James Harrison discusses the persecution of Christians in this period, positing some surprising suggestions regarding the reality of persecution under Nero and Domitian; he also highlights the Christians’ non-participation in Roman religio as a key cause of tension (p. 299). Tim MacBride explores the value of analysing certain New Testament texts through the lens of “minority group rhetoric” and shows how these texts functioned to help form Christian identity and continuity in the face of societal pressure. Murray J. Smith discusses Revelation in light of the violence in Roman society, and particularly that which Christians were victim to. He finds that Revelation calls Christians to “worship,” “witness,” and “wait” in the hope of God’s divine vindication. Finally, L. L. Welborn explores the way that the author of 1 Clement consciously adopted Roman political ideology in the letter exhorting the Corinthian church to “peace and concord.” It is a chapter that offers a sober reminder of the opportunities and dangers of adopting societal ideologies in Christian ministry.

The editors of this volume were deliberate in not seeking to harmonise the various chapters (p. 1), which has resulted in a diversity of opinions on numerous matters discussed across the various essays. For example, Gore-Jones and Llewelyn take the common view (admittedly not without some caution) from Tacitus that Nero used Christians as scapegoats to deflect suspicion from him (p. 173). Harrison, on the other hand, questions the veracity of Tacitus’s report and suggests that Nero could have been operating in his role as Imperator and Pontifex Maximus, punishing them for their non-participation in Greco-Roman religious practices and the perceived threat their “superstitio” presented to the status quo (pp. 287–89). The diversity found within this volume is not disorientating to the reader. Rather, it is a helpful introduction to the challenges of scholarship in this area, and invites the reader to join the fun of research in the New Testament and its context.

Into All the World is a testimony to the quality of scholarship that is being conducted in the two represented institutions: Macquarie University and Australian College of Theology. Each contributor has thoroughly engaged with the scholarship as well as the primary sources, including (where relevant) the literary, epigraphic, and archaeological evidence. This is a valuable volume that is worth engaging with, whether you are new to the discipline or a well-established contributor to it.