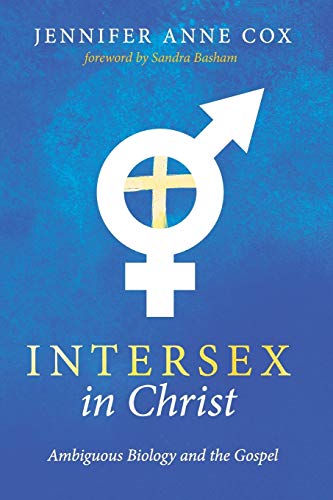 Intersex in Christ: Ambiguous Biology and the Gospel

Intersex, once a hidden reality, now attracts a good deal of attention and presents questions for Christians—theological, ethical, pastoral, and maybe even political. The two significant theological discussions, Megan DeFranza’s, Sex Difference in Christian Theology: Male, Female, and Intersex in the Image of God (Grand Rapids: Eerdmans, 2015) and Susannah Cornwall’s, Sex and Uncertainty in The Body of Christ: Intersex Conditions and Christian Theology (London: Routledge, 2014), have not been satisfactory for most evangelicals. So, we should be thankful that Jennifer Cox, an Australian theologian, has written Intersex in Christ.

Cox writes with compassion and a clear awareness of the pain and struggles of intersex people. Every chapter includes thoughtful accounts of the intersex experience which are then engaged with thoughtful gospel reflections. This work is evangelical, it focusses on redemption in Christ. Cox also gives fine summaries of contentious biblical, theological and ethical debates in the field and succinct responses.

The opening chapter offers a useful review of the nature of “intersex” conditions. Cox records some of the heartbreak and pain associated with the condition for many intersex people. This has been exacerbated by the common practice of surgical intervention to “assign” a sex to newborns. Cox favors the newer paradigm of slower and more conservative interventions which usually leave genital surgery until adult life, apart from a medically compelling reason (p. 22). Yet she also notes the view of some intersex people, especially in non-Western nations, who would have preferred to have had surgery as infants (p. 23).

Intersex people often experience gender dysphoria—they feel uncomfortable with the gender assigned to them as an infant (often surgically). This leads to a wider question of identity for many intersex people (p. 27) and related stigma and shame are only heightened by repeated examinations, surgery and insensitive treatment (pp. 27–31). Parents of children with an intersex condition face a high level of stress and can often make their child’s experience even worse.

Historically, intersex conditions have often been presumed to be related to homosexuality. More recently, they have been used by a radical “gender agenda” to deconstruct binary gender. Cox argues against this and points out that this agenda often uses intersex people as “pawns for … political ends” (p. 36). So “intersex, homosexuality and transgender are three separate matters” (p. 38).

The bulk of Intersex in Christ applies insights from creation, the incarnation, the cross and the resurrection to the discussion of intersex.

Chapter 2 emphasizes that we are embodied creatures, made in God’s image and fundamentally relational. Cox affirms that “all humans, however sexed, are created in the image of God” (p. 43) and that “having a body is good” (p. 44).

The Fall means that “the world is broken by sin,” though this does not remove “the goodness given … by God.” Congenital defects, including intersex conditions, are one of the manifestations of brokenness and physical death (p. 46). Cox notes that congenital defects particularly highlight the communal impact of sin: “we all experience the consequences of humanity’s sin, even before we are born, due to our intrinsic connection to other humans” (p. 46).

Cox considers arguments that humanity is not made “male and female” and concludes that Genesis 1–2 affirm binary sex (pp. 50–53). Intersex cannot be considered a third sex or gender, nor can we conclude that gender is on a continuum (p. 57). Intersex conditions are one of a number of ways in which human sexuality is affected by the Fall.

Chapter 3 deals directly with contemporary views of gender—mainly drawing on Virginia Ramey Mollenkott’s Omnigender (Cleveland: Pilgrim, 2007). Cox “cannot endorse the idea that we should do away with male and female, nor … that gender is fluid” (p. 67). Much of the chapter sets out her case for this. While I agree with Cox’s conclusion, I’m not convinced it is either necessary or helpful to attempt to ground binary gender in the doctrine of the Trinity. Her argument from biblical eschatology is better. Here she argues that since marriage points us to our destiny of union with God and it does so as people created male and female, so binary gender is important in God’s purposes.

Turing to the incarnation, Cox confronts feminist objections to God’s incarnation as a man. She makes the important point that this is not to claim that God the Son is male—we must not project the Jesus’s maleness into the Godhead. Furthermore, the New Testament emphasizes Jesus’s representative humanity, far more than it speaks of his maleness (p. 77). Cox notes the important parallel with Adam. Jesus’s maleness is part of the “scandal of particularity” and “we have no right to decide that we would like this to be otherwise” (p. 76).

Cox holds that intersex people do not have “to choose” their sex—an intersex person may be content to present as that, without fitting the binary pattern. “The only definitive reason that would require an intersex person to adopt male or female is when entering marriage” (p. 89). She recognizes that practically it is often easier for someone to live as male or female. This can be done without surgical treatment but can be a difficult decision and “the first choice may not be the best one” (p. 89) so a person may transition from one to another.

I appreciate Cox’s call for patience and care, and the recognition of the complexity of such decisions. Yet, as she acknowledges, God’s pattern is binary sex. It therefore seems best to help a person determine which sex they are and help them to live according to that. The process of reaching this decision and the decision itself will vary from person to person, depending on the details of their condition and on their life history.

Chapters 4 and 5 relate Jesus’s life to intersex conditions. Cox reminds us that Jesus shared in the sufferings of the human condition and offers forgiveness, salvation and a new identity to sinners, including those on the edges of society (pp. 100–9). She then considers and dismisses the argument that Jesus, as the product parthenogenesis (virgin birth) was intersex. She points out that the Virgin birth is not an explanation of the mechanism of Jesus’s conception (just as the resurrection is not a biological explanation). Jesus’ death heals broken human sexuality (Eph 5:25–27), since sex is primarily about relationships. So, in restoring us to God, Jesus “healed all that is broken in regard to sex, gender, and human sexuality” (p. 125). This would be a thin view of redemption but that the next chapter turns to the resurrection.

Chapter 6 argues that sexuality will be preserved but transformed in the resurrection. Resurrection is physical, but our bodies are transformed: “our bodies will be bodies still, but bodies of a different kind … with a greater glory than anything we can presently imagine. (p. 132). As part of this discussion, Cox reviews the arguments of DeFranza and Cornwall that the resurrection transcends the binary structure of “essentialist” views of sex and gender. Cox’s reply, in brief, is that resurrection affects the whole person, not just perceptions and relationships (p. 133). She insists that sin has changed the creation and affected all of our bodies: “no bodies … are perfect now. Every body dies and needs healing in the resurrection” (p. 135). There will be continuity of identity in the resurrection but also glorification—which could include genetic changes. (Cox wisely refuses to speculate about the biology of resurrected bodies.) She affirms the classic Christian view that humans will be raised as men and women. Intersex person will be raised with healed bodies “restored to male or female” (p. 140) as all find a transformed identity in Christ.

Cox argues that the resurrection affirms the goodness of bodies and so the value of restoration, including restorative surgery. In contrast, cosmetic surgery is often about making bodies “look” better, which doesn’t affirm the goodness of the body. She argues that intersex is already good and does not require surgery or hormone treatment to make it “acceptable,” though treatment might be recommended to deal with impaired function and enhance well-being (p. 144). I think her approach here is wise, though I’d argue that healing bodies is a good act, where it is possible. We often lack the wisdom to know what is truly restorative and/or the ability to deliver it—hence her proper caution.

On sexual ethics, Cox notes that some intersex people may not be able to have intercourse (due to malformed genitals or because they’ve been scarred by treatment), but may have a sexual relationship, and that this must be ordered by Christ. She affirms that sexual activity is only proper in heterosexual marriage. Her position is that intersex people should marry according to their gender. She insists that is not appropriate to transition gender after marriage (p. 152).

The book concludes with a call to the church to move from fearing intersex people to welcoming and valuing them in Christ.

Although I’ve noted some points of disagreement, I want to stress that Intersex in Christ is a helpful and stimulating read. It offers a fine model of applying gospel insights to a painful and confusing condition. I hope that evangelicals will heed Cox’s plea for understanding and compassion for intersex people.