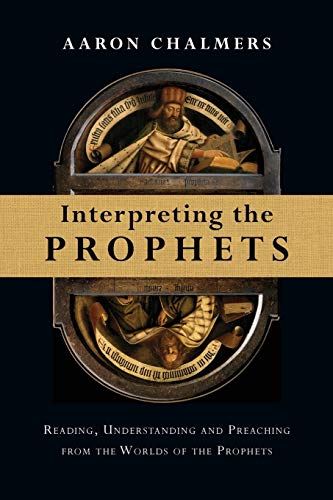 Interpreting the Prophets: Reading, Understanding and Preaching from the Worlds of the Prophets

This publication does all it says it will do in the subtitle, namely, it assists the reader of the Prophets in these three respects: reading, understanding, and preaching. And the inclusion of “understanding” between the other two is properly placed and not at all minimized, for many a sermon has been preached without the preacher’s appropriate understanding of his or her text. To this reviewer, this is the greatest strength and most important part of this fine handbook.

1. Though Chalmers’s treatment of the person and function of the prophet is helpful to the beginner, it breaks no new ground to what has been adequately handled by scholars such as C. Hassell Bullock (An Introduction to the Old Testament Prophetic Books, rev. ed. [Chicago: Moody, 2007]), Willem VanGemeren (Interpreting the Prophetic Word: An Introduction to the Prophetic Literature of the Old Testament [Grand Rapids: Zondervan, 1996]), and Robert B. Chisholm, Jr. (A Handbook on the Prophets [Grand Rapids: Baker Academic, 2002]).

2. Chalmers correctly underscores in this section the fact that to understand the works of the prophets, one must understand the environments in which they lived. His proposition is aided by juxtaposition of the prophets to specific historical events contemporary to them. These events are well illustrated by extra-biblical inscriptions containing ideas and concepts that impacted Israel and thereby called for prophets to respond.

3. The theological world of the prophets was one of pantheistic idolatry and cultic practices of the most repulsive and base kind, such as infant sacrifice and “sacred” prostitution. This milieu has been particularly well illuminated in the present day by Marti Nissinen’s study of prophecy in the world surrounding Israel (Prophets and Prophecy in the Ancient Near East, WAW 12 [Atlanta: Society of Biblical Literature, 2003]). The prophets were, of course, aware of these things, frequently mentioned them, and assessed them to be the wicked things they were judged to be by Yahweh their God. However, their greater attention was devoted to warnings to their own people to avoid such things if they were to enjoy the covenant blessings graciously promised them by Yahweh. Here Chalmers brings the Decalogue into his purview and explains its relevance as a standard against which the idolatry of the nations must be evaluated and condemned.

4. Section 4 deals with the rather elusive theme of rhetoric. By “rhetoric” and “rhetorical world” the author means (1) “the study of the technique of using language effectively” and “the art of using speech to persuade, influence or please; oratory” (p. 93). Chalmers does not compare and contrast the Prophets with the rhetoric of other Near Eastern cultures; rather, he employs the results of modern literary criticism, form criticism, rhetorical criticism, and a touch of linguistic analysis. This is useful, to be sure, but a study of the contemporary literatures of neighboring peoples would also have been of benefit. To what extent was “borrowing” done by Israel and to what extent were their native-grown literary styles and methods unique?

5. The chapter that deals with the differences between apocalyptic and “regular” predictive prophecy is one of the best in the book. Chalmers provides many examples of these two types, but the following summary will suffice for the whole: “It needs to be emphasized from the outset that prophecy and apocalyptic are not two completely distinct genres. Apocalyptic is essentially a subset of prophecy and grows out of prophecy. It is prophecy with a special form, and striking content, or, to put it more colloquially, it is ‘prophecy on steroids’” (p. 121).

6. The book concludes with a succinct application laying out some guidelines for preaching prophecy. They are: (1) choose your preaching texts carefully; (2) identify appropriate analogies; (3) focus on the theology of the text; (4) consider the witness of the New Testament; and (5) note potential problems to avoid, such as reading into the text and failing to consider context and other clues to meaning.

Of the numerous recent works on this subject, this is among the best. All pastors, teachers, and others who are called upon to preach the Prophets should obtain and make regular use of this superb guide book.