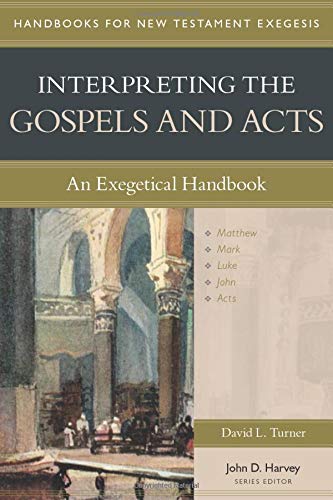 Interpreting the Gospels and Acts: An Exegetical Handbook

David Turner, professor emeritus of the New Testament at Grand Rapids Theological Seminary, is well-known to Themelios readers for his major commentary on Matthew (Grand Rapids: Baker Academic, 2008). In this handbook, Turner offers scholars, preachers, and enthusiastic Christians instruction in a subject that he cultivated only “later in [his] life and ministry,” after his initial interest in Pauline theology (p. 18). This substantial resource imparts data, methods, wisdom, and references that Turner developed while studying “the Gospels and the other narrative books of the Bible” (p. 18). According to the series editor, the four Handbooks for New Testament Exegesis are “designed to provide an understanding of the different types of literature in the New Testament … [including] strategies for interpreting and preaching/teaching them” (p. 15). Like other books in the series, Interpreting the Gospels and Acts comprises eight chapters of topics that are specified by the editor. Turner’s robust, enlightening, and practical work more than meets the objectives of this series.

Turner’s first chapter discusses the subject of genre and argues that the gospel writers modeled their narrative after “Greco-Roman biographies” (p. 33). Although in a theological sense, Acts “presents the ongoing βίος of Jesus,” its genre is best understood “as a history or monograph” (pp. 34–35). Chapter one also discusses the genres and other features embedded within these five texts, including their intertextual relationship with the Old Testament.

Chapter two addresses “the historical settings of the Gospels and Acts,” which include the OT, “Second Temple Judaism,” the “archeology and physical world” of the holy land, and “Greco-Roman history” (pp. 69–74). The Jewish elements in this setting include rabbis, Pharisees, scribes, elders, Sadducees, the Sanhedrin, Essenes, politically leaning groups, and the feasts (pp. 84–93). Turner closes the chapter discussing the individual settings of the four Gospels and Acts.

After discussing the bounds of theology in general, the third chapter briefly reviews the theological treatments of Jesus and the Spirit in the four Gospels and Acts (p. 112). Matthew highlights the kingdom of God, the Church and its mission, and “intertextuality” with the Old Testament (pp. 123–28). Mark’s characters have “a limited recognition of Jesus” (p. 131); his Gospel “especially features the [disciples’] foibles” (p. 133), and it has an “abrupt ending” (p. 135). Luke-Acts is distinctive regarding salvation, the prominence of Jerusalem, the noticeable objective of Rome, and “evangelizing the outcasts” (pp. 136–40). John’s uniqueness involves its prologue, “signs and faith,” and “life eschatologized” (pp. 143–49).

The fourth chapter, “Preparing to Interpret the Gospels and Acts,” discusses textual criticism, the “theory and practice” of translation, and critical methods, including form criticism, source criticism, and redaction criticism (pp. 151–90). This chapter concludes by recommending “narrative criticism” and “Freytag’s Pyramid” (pp. 191–94).

Chapter five “focuses on the linguistic aspects of exegesis, which include translating the text from its original language into that of the exegete and analyzing the original language in terms of its structure, syntax, and key words” (p. 197). Turner recommends the methods of “visual display,” “phrasing,” “line diagramming,” and the “Ogden-Richards Triangle” (pp. 207–16). Moreover, word studies begin with their meaning in the pericope and expand in “concentric circles” out to the “extra-biblical” context (p. 220).

Turner, in chapter six, relays the advice of Cicero and Augustine that “the goals of communication [are] teaching, delighting, and moving” (p. 232). Turner describes speech act theory and argues, “The distinction between exegetical interpretation and practical application cannot be turned into a rigidly sequential enterprise” (pp. 235–36). The chapter also reviews Lectio Divina, describes the difference between “deductive and inductive preaching” (p. 244), and offers a sermonic case study of Acts 2:37–47.

Chapter seven offers two extended case studies for “exegesis and exposition” (p. 253). According to Turner, “Mark 4:1–20 … is deceptively difficult to understand and preach” because it “creates a rollercoaster of emotions” (pp. 283–84). Turner, therefore, packages it into three “moments”: “ambiguity,” “humility,” and “clarity” (p. 285). John 1:1–18, which scholars interpret either as “a chiastic” structure or “a step-parallel” (p. 301), has “high Christology” (p. 303) and exhibits its influence in the councils of Constantinople and Chalcedon.

Turner robustly fulfills his purpose in a way that is both enlightening and practical. He informs the reader about genre and other issues in the field of exegesis, educates her about scholarly methods, and recommends a variety of resources for her further study. The book’s strengths include Turner’s analysis of the distinctiveness of each gospel, his presentation of the sequence of exegesis, his cataloging of resources, and his discussion about Augustine’s call to beautify the message and motivate the recipient. If the other Handbooks in the series are as substantial as Interpreting the Gospels and Acts, it is one of the best mini-series on the market.

Turner’s inclusion of Lectio Divina, however, is unexpected because of its association with Christian mysticism. Even so, he plausibly argues that its “attitude of worshipful reflection is certainly appropriate for anyone who wishes to study and communicate the Bible” (p. 242). Turner warns against “‘open’ contemplative state[s]” and “repetition” (p. 242), and one suspects that his broach of this method intends more to redefine it than advocate it. He asserts that evangelicals have contributed to its “widespread” use (p. 241) yet does not claim any personal practice. In the end, Turner deflects: “Let our study be prayer” (p. 242). If one defines prayer as communication with God, Lectio Divina practitioners would hardly exclude their praxis from that definition.

This publication also has shortcomings. Turner’s identification of genres is helpful, but his list of embedded genres is not exhaustive. For example, he could have mentioned the woe sequences in Matthew and Luke (which resemble those in Isaiah and Habakkuk). Moreover, some of Turner’s headings could be more accurate. Under “The Distinctive Theology of Mark,” the subtitles, “Limited Recognition of Jesus” and “The Failure of the Disciples and the Ending of Mark” (pp. 129–33), may refer more to Mark’s literary purpose than his theology.

In summary, Interpreting the Gospels and Acts meets and exceeds its stated objective to provide “an understanding of the different types of literature in the [Gospels and Acts] and … strategies for interpreting and preaching/teaching them” (p. 15). His extensive particulars support the value of this work. I recommend the book for its intended audience: scholars, preachers, and “well-motivated” individuals who serve the Lord without remuneration (p. 16). I would count myself blessed to find the four volumes of Handbooks for New Testament Exegesis on my shelf.