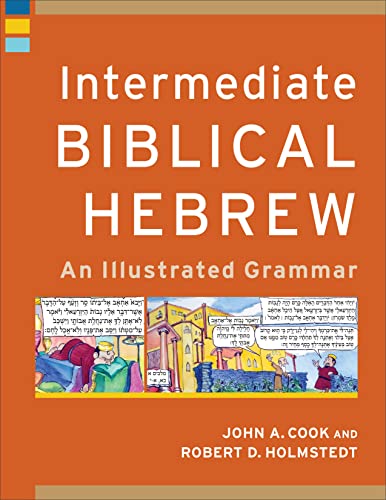 Written by John A. Cook and Robert D. Holmstedt Reviewed By William A. Ross
Old Testament

This volume is the follow-up to Cook and Holmstedt’s Beginning Biblical Hebrew (Baker Academic, 2013) and is positioned as a textbook suited for students who have completed introductory coursework in Hebrew and wish to advance to the next stage of competence. While the authors state that their own beginner’s grammar is best suited to set that stage, this volume is meant to be serviceable following the use of any introductory text. The most important advantage that the authors claim for their volume over competing resources is its facilitation of an active approach to learning. Cook and Holmstedt critique other intermediate grammars for being more pedagogically passive and assuming that more paradigms, parsing, and “Latinate-based case language labels” will foster proficiency (p. 6).

Cook and Holmstedt are well-known and active scholars within the current world of Hebrew language studies, which includes much discussion of pedagogy. In light of the ongoing movement towards active learning models in the classroom, this textbook aims to be immersive and communicative. For example, the authors encourage instructors not to ask for translations of the passages included in the grammar, focusing instead on reading aloud in class, memorizing sections, performing scenes from the narrative, and follow-up question and answer sessions (perhaps in spoken Hebrew) to evaluate comprehension. To help facilitate such activities, Cook and Holmstedt have also created e-resources for both student and instructor, which are available freely on the Baker Publishing website for the textbook. For instructors, these resources include a nineteen-page Hebrew-English glossary (also at the back of the book) and a list of vocabulary by lesson. A test-bank of questions is slated to appear but was not yet available at the time of this review. For students there are online, Quizlet-based flashcards sets for each lesson. Links to audio files for each chapter are also available, but either have not yet been finished or were not in working order (in either Chrome or Edge browsers) at the time of this review.

As for the content of the grammar itself, there is much to praise. The core material consists of twenty-four readings drawn from the Elijah narrative (1 Kgs 16:29–2 Kgs 2:14), meant to fit the typical schedule of two meetings per week in a semester. Each reading is wonderfully and thoughtfully illustrated in full color by the artist Philip Williams. The illustrations affect the style of a graphic novel, complete with well-placed boxes and speech bubbles that include the Hebrew text itself. Since the flow of the narrative is the controlling organizing principle, Cook and Holmstedt touch on syntactic and semantic topics in a less systematic and more inductive fashion than the typical reference grammar. Since the goal of this volume is to expose students to the kind of linguistic variation and repetition characteristic of real Hebrew narrative, the authors have no hesitations about any perceived lack of strategic organization in content. One practical effect of this approach is that, when many grammatical features are discussed outright, it will not be the first time students have encountered them in the readings.

Each chapter and its illustrated reading are accompanied by several key features. A list of vocabulary is provided for the passage, including any words occurring fewer than two hundred times in the Hebrew Bible. Notably, for this list no English glosses appear. Rather, blanks are provided so that the student can write in a gloss based on inductive reading (hence the instructor Hebrew-English glossary). Non-Qal verbs in vocabulary lists also have three blanks for students to write in the trilateral root. Each chapter also has a section discussing grammatical issues based on the reading, along with a “Challenge” section diving deeper into a more advanced topic. Chapters also include one or two explanatory aids called “Reading Insights” that relate certain grammatical features to textual comprehension. Finally, the readings are followed by review questions that gradually build on concepts introduced over the course of the textbook.

There is no doubt that this intermediate grammar is unique given its approach and the wealth of valuable material it includes. For example, aside from the pedagogical method and content as described above, this text also makes use of actual manuscripts. Numerous chapters refer students to a full-color, thirteen-page facsimile of the Aleppo Codex in an appendix. Unlike some other grammars, which occasionally include manuscripts, Baker has done a wonderful job of providing an image with high enough resolution to make use of it. Additionally, those familiar with the work of Cook and Holmstedt might hope to see their expertise in linguistics inform the syntactic discussion in this textbook, and they will not be disappointed (but see further below). Those who may be reluctant to wade into what can seem to be the intimidating territory of more linguistically informed analysis than most traditional grammars contain can be reassured that the authors have provided a glossary at the back to lower barriers to entry.

A few critical observations are in order. First, this textbook goes far in applying linguistically informed analysis in a student-friendly format, as indicated above. However, the authors do not provide any kind of table of contents, index, or other list directing the reader to relevant sections of the book where a given syntactic feature or linguistic issue is discussed. This shortcoming is unfortunate since, although not designed to function as a reference grammar, adding this sort of topical index would have added considerable value to the book. As it is, the only way to know what grammatical or linguistic topics are addressed in the book is to page through the entire book. Second, when it comes to the grammatical discussion, challenge section, and reading insights in each chapter, it is not always clear what the differences are between these categories. This issue is not necessarily a drawback or weakness, per se, but it left this reviewer wondering about the underlying logic for locating a given syntactic issue under one heading rather than another, except perhaps to break up content into more manageable chunks. Third, readers should know that Cook and Holmstedt have particular views on important topics that are not universally held. One such issue is the verbal system (see pp. 105–6, 199–20). Cook is one of the most prolific scholars today advocating aspect-prominence, with qatal as perfective, yiqtol as imperfective (both being modal when clause-initial), and wayyiqtol a genuine preterite. Another important issue is word order and information structure (see pp. 39–40, 45–6, 91). On this topic, Holmstedt—who is informed by generative linguistics—argues for a subject-verb-object default Hebrew word order. Although Holmstedt defends this view with robust argumentation, it is a minority report that has been criticized by a number of scholars who uphold a verb-subject-object view. The extent to which these two issues affect the textbook overall is probably fairly small. However, with no further discussion and no topical index or table of contents for grammatical issues, readers may not be aware that other views exist within a very lively (sometimes vehement) ongoing debate among Hebraists. Consequently, readers could easily be left confused, particularly if coming to this textbook from a different introductory grammar. At the same time, for those more familiar with these intricate debates, the views baked into this grammar could serve as an interesting forum for analysis and discussion.

Despite these points of weakness, this textbook remains a very valuable addition to the growing range of resources available to students and instructors of Biblical Hebrew. The authors and illustrator are to be commended for their work, which deserves a wide audience.