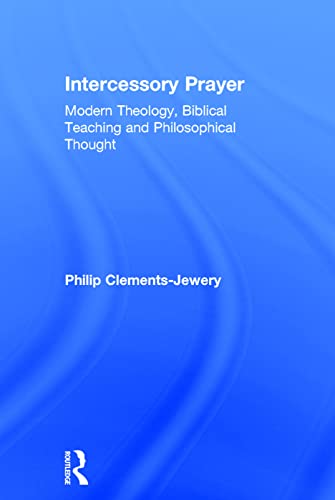 This book is not an examination of the practice of prayer—its content, methods or aims. Rather, Clements-Jewery is attempting to present a philosophical rationale for intercession. Why is it necessary? How is it possible? How does it ‘work’?

The issues that are thus raised are not, as the author acknowledges, unique to a consideration of prayer. Instead the heart of the book’s concern is the divine-human relationship viewed through some of the classical loci of philosophical theism: God’s impassibility, immutability, providence, sovereignty, foreknowledge, human freedom and the open-ness of the future.

The author’s aim is to defend the practice of intercessory prayer against a classical theism which, on some accounts, can reduce prayer to a ‘thy will be done’ mantra, changing nothing except the prayer. On the other hand, the danger of a ‘magical’ view of prayer which forces God’s hand through petition must be avoided.

Clements-Jewery seeks to steer a course through these issues to establish ‘an intellectually respectable, logically coherent and theologically satisfying account of petitionary and intercessory prayer’. The goal is to establish a basis for petitionary prayer in which humans freely pray and God freely responds in ways that may not have been possible without such praying. The aim is laudable. Yet one must question:

Having introduced the book’s theme, the ambitious heading for chapter 2 is What does the New Testament teach about prayer?’ This 20 page survey is used to draw only the most general conclusions: e.g. that ‘we would not wish to rule out altogether the value and importance of persistence in prayer.’ What is most disappointing with the chapter is that it is virtually forgotten in the rest of the book. At best it looks as though the Bible raises the issues but we turn to the philosophers for the resolution.

In the subsequent chapters, a series of questions are examined. Chapter 3: ‘Why is it necessary to pray?’ is answered through the lens of personalist thought (e.g. H.H. Farmer, John Macmurray). Chapter 4: ‘Is God capable of answering prayer?’ is addressed by challenging some notions of impassibility (through the work of Jurgen Moltmann and Paul Fiddes). Chapter 5: ‘How does God work in the world?’ examines various accounts of providence, rejecting Augustinian models (Karl Barth, Paul Helm) in preference for models of divine ‘persuasion’ as against ‘manipulation’ or ‘coercion’ (e.g. Vincent Brummer). Chapter 6: ‘How does prayer work?’ is discussed from the perspective of process theology (Alfred Whitehead, Charles Hartshorne, Marjorie Suchocki) Where God not only influences the world but is influenced by it.

Throughout, the author is seeking to release prayer from some of the categories of classical theism (impassibility and Augustinian sovereignty) and re-cast it in personalist, process though. The result is a theology in which God may ‘strengthen certain possibilities’ in response to prayer. It goes without saying that this falls far short of the biblical expectations for prayer! What is missing?

Well, it cannot be co-incidence that Clements-Jewery is strongest in chapter 4, examining impassibility in the light of Christ crucified. And we are not surprised that he is weakest in chapter 6 where he allows the process theologians to exchange Christ for creation, thereby making the God-world dynamic constitutive of the divine life rather than the Father–Son relationship. In short, Clements-Jewery has approached the God-man relationship and has been successful only to the degree to which the God-Man has shaped his thinking. Unfortunately, considerations of Christ, his Person, his intercession, his Gospel and Scriptures have not been determinative.

The book Will be of benefit to the student orienting themselves to these issues, but it comes well short of the answers which the author or his readers desire.