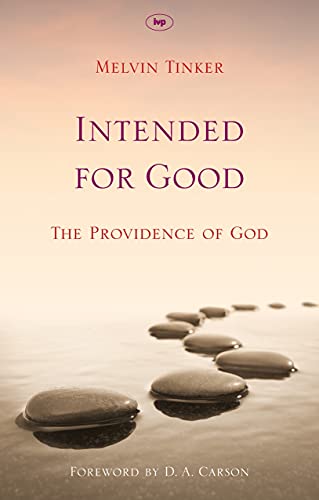 Intended for Good: The Providence of God

Melvin Tinker is the Vicar of St. John Newland in England. He has published several books and over fifty articles on a wide range of topics, including writings on the providence of God. He believes that for much of Christian history, the providence of God was central to the life of the believing community. Today, it is treated as a fringe doctrine in both Christian thought and practice today. In Intended for Good, Tinker wants to show that “providence shines as a glorious jewel in the crown of the Christian faith” (p. 13). Therefore, this is not an academic work, as much is already written in that field; rather this book’s aim is sharply pastoral and practical.

Chapter 1 is foundational. Tinker introduces providence as “God our heavenly Father working in and through all things by his wisdom and power for the good of his people and the glory of his name” (p. 19). His definition is grounded in Rom 8:28, which provides the framework for the rest of the book. Tinker lays out three helpful principles here, opposing false notions of God’s providence: 1) God defines good, over against prosperity gospel, 2) we respond, over against fatalism, 3) we must have a long-term view, over against an immediate understanding. He excels throughout the book in addressing other ways we wrongly approach God’s providence.

Chapters 2 and 3 address two of the most challenging topics regarding God’s providence, God’s sovereignty and human responsibility and God’s providence in relation to time. These topics are the source of all kinds of philosophical debates and issues. Tinker rightly avoids the debates and various positions surrounding them, as his focus is to provide a starting point to understand how these truths apply in the everyday lives of ordinary Christians. He provides an appendix on these issues for those who are interested in delving deeper. Tinker stays firmly grounded in Scripture to show that God is in control, he does not take any risks, but we have a responsibility to respond. The results for the believer are qualities like trust, faith, rest, and thanksgiving.

Chapters 4 and 5 focus on the Christian individual. Chapter 4 employs the life of Joseph as an illustration of God’s providence in action, pointing to the fact that it is personal, purposeful, and pervasive in all areas of life. This fact is then brought into chapter 5 where Tinker applies it to the life of the believer using Psalm 139. In an odd two paragraphs, Tinker flirts with the notion of God’s providence and British privilege (pp. 81–82). While this is an attempt to stir up gratitude in his readers, it ends up being a distraction in an otherwise decent chapter for those not from Britain.

Chapters 6 through 9 look at four key areas of the Christian life: prayer, guidance, suffering, and conversion respectively. These chapters show Tinker’s pastoral sensitivity and theological maturity. For example, he walks through the difficulty of praying to God as Father for those who haven’t grown up with one (pp. 91–92). Readers are shown in the chapter on guidance that knowing God’s will is not some mystical experience; instead God’s will is wrapped up in the person and work of Jesus Christ (p. 108). God’s will frees the Christian “to get on . . . where he has put me” (p. 110). On our suffering, the life of Job is masterfully illustrated to remind us that we only know and see in part what God knows and sees in whole, therefore even our worst suffering shows God’s good intentions. The chapter on conversion includes Tinker’s personal testimony as an example of the lengths to which God orchestrates conversion through providential means.

Chapter 10 attempts to use the book of Ruth as the case study to tie together many of the concepts of God’s providence discussed earlier. Tinker accomplishes this goal with mixed results, sometimes forcing his exegesis to make it all fit. If one has not picked up on the central theological message of the book by this point, Tinker provides the clearest explanation here, “namely, that of the hidden and active God who is continuously at work amongst his people even when it appears that nothing is happening” (p. 158).

Two brief critiques are warranted. First, though the “central theological message” includes “God’s people,” there is little in this book for us collectively, save the discussion questions. The chapter on guidance only has what amounts to a parenthetical mention of seeking wisdom from pastors or Christian friends (p. 104). Instead, the book’s lens is individualistic. How is God’s providence applied to us? Stating the central theological message earlier and teasing it out more for God’s people would strengthen it. The second is with the newer Christian brother or sister in mind. While the book has an accessible style, Tinker gets wordy at times and is inconsistent in defining technical terms when he uses them. This can prove frustrating for those exploring this topic for the first time.

Overall, Intended for Good achieves its goal to show off the beauty of God’s providence. It is a needed practical book on a neglected aspect of God’s involvement with his people. It should not be read alone but in community, so that small pockets of God’s people all around can have their eyes pried open to God’s good intentions in all aspects of their lives for his glory.